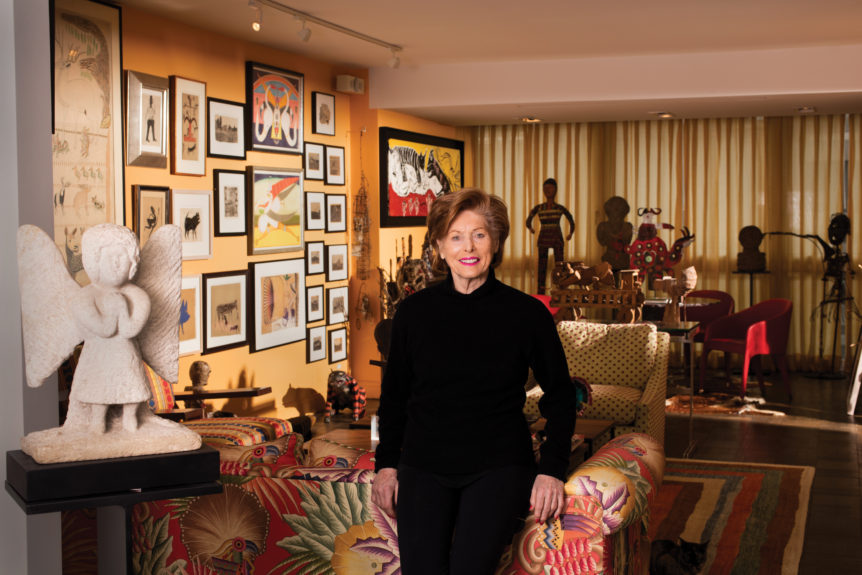 It is not so extraordinary to say that on Manhattan’s Upper East Side there lives an elegant woman of a certain age who enjoys collecting art. Or that she has filled her sunny and well-appointed apartment with some fine works, and graciously and patiently discusses them with any and all interested guests. This could certainly be said of Audrey B. Heckler (Fig. 10), who invited me to her home on two occasions, most recently this spring. There is, however, nothing ordinary about either the collector or her collection. During these visits she demonstrated an approach to art that is singular and passionate, a personal directive that centers exclusively on works by self-taught artists of the twentieth and twenty-first centuries.

Heckler’s astonishing trove of some five hundred works fills every inch of wall space and display area in her spacious apartment, plus an Upstate New York home, and features a broad range of artists and genres within the outsider field. The term “outsider” refers here generally to works by artists who never formally studied art, and, for one reason or another, have been disconnected from the art-world mainstream.

Pieces that can easily be identified as folk art are well represented in the collection, such as Untitled (View) (Fig. 1), a particularly jaunty and seductive image of a female nude by Morris Hirshfield. There is a greater concentration of American vernacular artists’ works on display, especially by African American artists of the South, such as Bill Traylor, Clementine Hunter, Nellie Mae Rowe, Sister Gertrude Morgan, Mose Tolliver, Purvis Young, and Jimmy Lee Sudduth.

Tennessee sculptor William Edmondson, whose works were often commissioned as tombstones for Nashville cemeteries, created a particularly fine carved limestone Angel (Fig. 5), one of the collection’s highlights, which Heckler displays on a lazy susan–like sculpture stand designed for the piece. A large, fierce Tiger (Fig. 4), an oil-on-carpet painting by Alabama’s Thornton Dial, presides majestically over one area of the living room.

A successful real estate broker, now retired, Heckler has served on the boards of the American Folk Art Museum, and the Foundation for Self Taught Artists in Philadelphia. She began collecting in depth in 1993, at the first Outsider Art Fair, held in New York City at the Puck Building in SoHo, an event she remembers well.

“A friend took me to the fair; I had never seen works of outsider art before,” Heckler told me. “The color and the originality of the imagery attracted me. The odd figures and unusual techniques all appealed to me. I was also fascinated by the stories of these artists, their biographies.”

Heckler has not shied away from collecting difficult works by European outsiders, art of the insane, and the practitioners of what artist Jean Dubuffet first labeled art brut, or “raw art,” in the late 1940s.1 After meeting art dealer Phyllis Kind in the mid 1990s, and with her encouragement, Heckler began to assemble an astonishing array of European works by physically and mentally handicapped artists, and also prison inmates—those individuals who may have been removed from society, but not from the rarefied realm of creativity. Today, European artists comprise about forty percent of Heckler’s holdings.

The collection contains prime examples by Swiss mental asylum inmates Adolf Wölfli and Aloïse Corbaz, and the London– born Madge Gill, who, like many of these artists, experienced what British scholar Roger Cardinal describes as “a spiritual illumination characterized by hallucinations and extreme mental turmoil.”2 Heckler has a great number of works by the Italian painter Carlo Zinelli (see Fig. 9), who suffered from delusions and hallucinations; eleven examples are featured in the first-ever Zinelli survey in the United States, presented at the American Folk Art Museum. The museum is also hosting a concurrent solo show by Russian outsider Eugen Gabritschevsky, containing several Heckler pieces. (Both exhibitions are on view in New York through August 20.)

Heckler regularly loans works to museum exhibitions around the world. A number of her Bill Traylor pieces will be featured in a major Traylor retrospective opening at the Smithsonian American Art Museum in fall 2018, in Washington, D.C.3

Coinciding with the American Folk Art Museum shows, a recent book published by Skira Rizzoli and AFAM is devoted to the Heckler collection. Edited by AFAM curator Valérie Rousseau, The Hidden Art: 20th- & 21st-Century Self-Taught Artists from the Audrey B. Heckler Collection, focuses on forty-nine artists, with essays by art historians chosen by Rousseau to highlight a specific work by each artist.

Among the attributes that unite the disparate works in the book and in the collection itself is an overriding obsessive quality in terms of imagery as well as technique. Endlessly repeated forms, figures, and patterns of line and color are hallmarks of many of these artists. Among the most masterful, Mexican-born Martín Ramírez developed a highly evolved iconography of figures, animals, fluid architecture, fathomless tunnels, and sensuous abstract shapes that convey a personal cosmology. Similarly, the deaf-mute Idaho native James Castle (Fig. 2), with his soot drawings on found paper and elaborate paper constructions, created a homespun universe for himself within the confines of his modest family farm near Boise.

A palpable sensuality, and often repressed sexuality, is discernible in pieces by a number of artists, among them Henry Darger (1892–1973) of Chicago, whose idealized images of children of ambiguous gender illustrate a massive, unfinished novel he worked on for decades, into the 1950s. The story centers on the Vivian Girls, who act out a continuous war narrative of epic proportions. Darger’s unparalleled achievement is represented in the Heckler collection by a large, panoramic, doublesided collage and watercolor composition.

“I never liked a type of painting which shows a bowl of cherries, polished and shiny,” Heckler states in an interview included in the recent book. “Something has to be a little off-center. That’s why self-taught art appeals to me. I like its whimsicality. I like its difference. I like its uniqueness. I have no pre-established parameters; I am guided by whatever called to me.”4

After two and a half decades, Heckler may be regarded as a pioneer collector in her field. This is so because until relatively recently, the art that appealed to her, and that she wholeheartedly embraced, was found by most collectors to be very difficult to understand and quite impossible to live with.

David Ebony is a contributing editor at Art in America, and the author of a monthly column for the Yale University Press Blog, as well as a frequent contributor to artnet news. He is also an independent curator, most recently of Grasshopper, a Judy Pfaff survey, at the Frank Institute at CR10, Linlithgo, New York, in 2016.