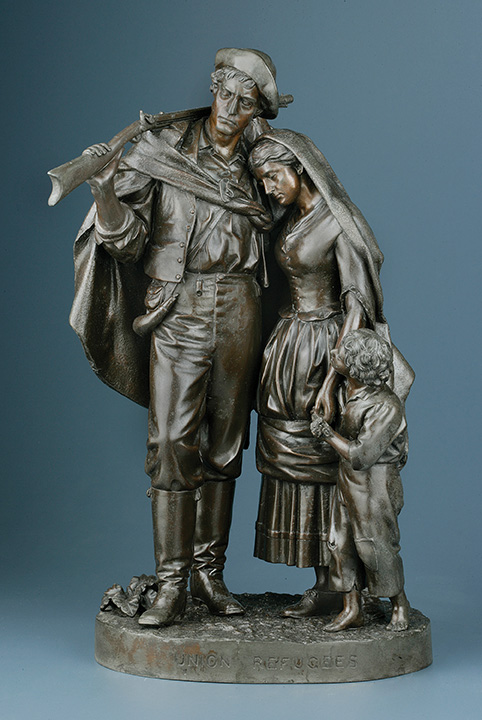 In April 1914 the Modernist Studios in New York City held an “Exposition of Bad Taste.” Wallpaper patterns that had been popular in the 1880s served as the backdrop for a crowded display comprising “marble-topped furniture, seaweed, wax flowers, and other treasures under glass; samplers, homemade paintings, ornate chinaware of every description, and countless articles such as were considered extremely genteel in the old days.” Guests at the opening joined in singing around an organ that had been “dragged from the company room of a Vermont homestead.” The only modern object present, as the New York Times noted in its bemused coverage of the event, was “a shiny fire extinguisher.”1

The exposition, a publicity stunt by the interior decorator Ruby Ross Goodnow (later Ruby Ross Wood), is little remembered today. Yet it could be considered a bellwether event in the history of decorative art, an early example of design reform’s tendency to define itself squarely against a teeming realm of bad taste. Goodnow’s caricature of the nineteenth century is still with us today. So too is her instinct to divide modernism cleanly from everything that came before.

Much could be said on this topic, but here my concern is with a particular inclusion in the exposition. Pride of place in the show—which is to say, particular ignominy—was reserved for the figural groups of the sculptor John Rogers. This was only the latest instance in which this supremely popular figure in American art was put firmly in his place. “There is no sculptor in the United States who is better known to the people,” an art critic had written two decades earlier; but “the sculptor whose works are to stand the test of time must secure the approval of the few competent critics rather than the approbation of the many.”2

What was it about Rogers that made him so unpalatable to the elite, and so loved by everyone else? We can get a sense from his Union Refugees, one of several works in which the artist took contemporary politics as his subject. The composition recalls an earlier sculpture by Rogers, The Slave Auction (1859), which portrays an African-American family on the block, about to be broken apart. Union Refugees, with similar pathos, depicts a family of Southern whites aligned to the Union cause, who have been forced to abandon their homes during the Civil War.

Union Refugees was among the most important works in Rogers’s career because it was the first that he was able to cast in bronze. (His later success came through massproduced plasters based on such bronze originals.) While it is unknown whether this particular sculpture was included in the “Exposition of Bad Taste,” it certainly exemplifies the qualities in Rogers’s art that Goodnow and her friends would have scorned. The figures are generic—idealized, yet without the grace of highbrow classicism. Props litter the compressed scene, helping to tell the story as if in an overdirected play. Emotion is conveyed in reductive shorthand. This is exactly the sort of art that modernism helped us to forget.

Perhaps it’s time to reconsider. Rogers’s little family of refugees may be maudlin, but they were far from fictional. The Civil War had unleashed a refugee crisis comparable to what is now happening in Europe. Just like Syrians today, white Unionists—and a far larger population of former slaves—were fleeing their homes in search of safety. Many African Americans attached themselves to Union military columns for protection. Others headed north hoping to find work, beginning a pattern of migration that would continue for decades. The U. S. Government, realizing the gravity of the situation, created a new Bureau of Refugees, Freedmen, and Abandoned Lands. It became one of the primary instruments of Southern reconstruction. The bureau distributed food and health care, set up schools, managed land transactions, and found jobs for those who had been displaced by the war, both white and black. W. E. B. Du Bois, assessing the organization with the benefit of hindsight, saw clearly that it could never have created equality for African Americans in the South, “when suspicion and cruelty were rife, and gaunt Hunger wept beside Bereavement . . . the work of any instrument of social regeneration was in large part foredoomed to failure.” Yet he concluded that the bureau was “on the whole, considering the situation, successful beyond the dreams of thoughtful men.”3

How are we doing in comparison? The American response to the Syrian refugee crisis has been notable for its divisiveness. President Obama set a goal of hosting ten thousand refugees by the end of September 2016 (by contrast, Germany has given protection to more than 250,000). This modest target has been met, but only in the face of vociferous opposition from, among others, thirtyone state governors (including those in all the original states of the Confederacy, apart from Virginia).4 The visual culture of the crisis tells a similar story. Images deployed by right-wing nativists, from Donald Trump to the “Leave” campaigners of the U. K. Brexit referendum, invariably show refugees en masse. As these huddled masses shuffle along in misery, their yearning to breathe free does not seem to be much under consideration.

On the other side of the political ledger, the most potent image of the refugee crisis has been that of the lifeless body of Aylan Kurdi. The three-year-old boy washed up on a beach after an inflatable raft, carrying him and other refugees, sank off the shore of Turkey. It is a photo that shocks. Doubtless it brought the horrors of the Syrian diaspora home to many when it went viral on the internet. Like the antimigration propaganda it counters, however, it is an image that primarily communicates hopelessness. Whether they are shown as unwelcome hordes or tragic casualties, refugees are being treated as statistics rather than people.

Certainly, there are differences between the refugee crisis of the Civil War and that happening today. For one thing, Americans then had no choice but to face the reality of the dispossessed. They were already here. Fear of terrorism is also a new factor. It has helped spur an irrational xenophobia that was unknown in the nineteenth century (though anti-immigrant feeling was certainly commonplace). These important differences aside, there is something more fundamental in Union Refugees that seems to be lacking today: a desire to imaginatively enter the plight of the unfortunate.

Consider the words of Lore Abenaa Afrakoma II. In August the New York Times published another heartrending photo of a Syrian boy, Omran Daqneesh, dazed and bloodied from an airstrike in Aleppo. Afrakoma commented via Facebook: “I don’t know how many pictures of suffering Syrian children it will take for our international community to act. What I do know is that this isn’t the last image that will trend for a couple days and fade away.”5 Rogers tried to infuse his refugees with real human feeling. History has moved on, and it’s understandable that his brand of sentimentality may ring false. It is not what moves us, nowadays. The question remains: what would?