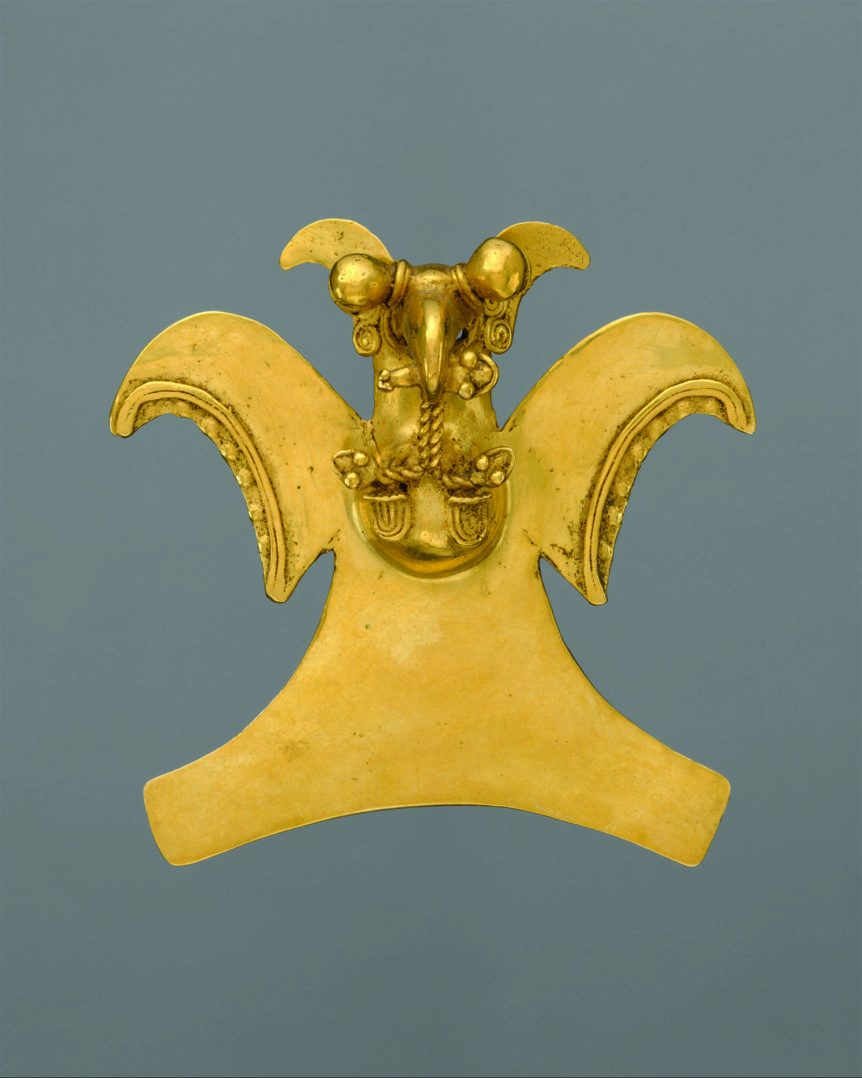 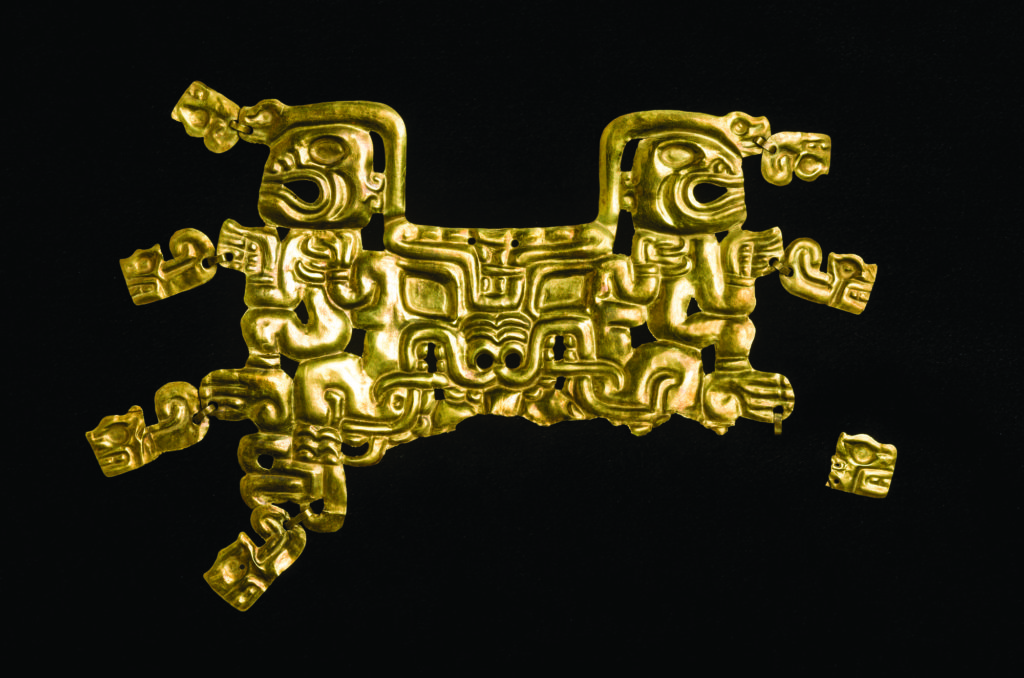 In October 1502 Christopher Columbus’s fourth voyage brought him to the coast of Central America, specifically, to a region he would later name Costa Rica, or “rich coast.” He bestowed this name because of the exquisite gold ornaments he saw worn by the locals who greeted him, works probably similar to the eagle pendants in Figure 1 that have survived to the present day. Survived, and remarkably so, for luxury arts—especially fragile manuscripts, tapestry and feather work, and mutable metals—were particularly vulnerable to the depredations of the Spaniards in the colonial period. Aztec and Maya books were destroyed as instruments of the devil; sumptuous Inca textiles were likewise destroyed, either through intentional campaigns to erase ethnic heritage or through neglect. Pre-Columbian metal objects were melted down and cast into ingots for ease of transport and trade, or they were destroyed in the subsequent decades as funds were needed for ongoing wars in Europe and beyond. Metals, so easily transformed, would be transformed again, to suit new purposes, for new rulers, and a new god. 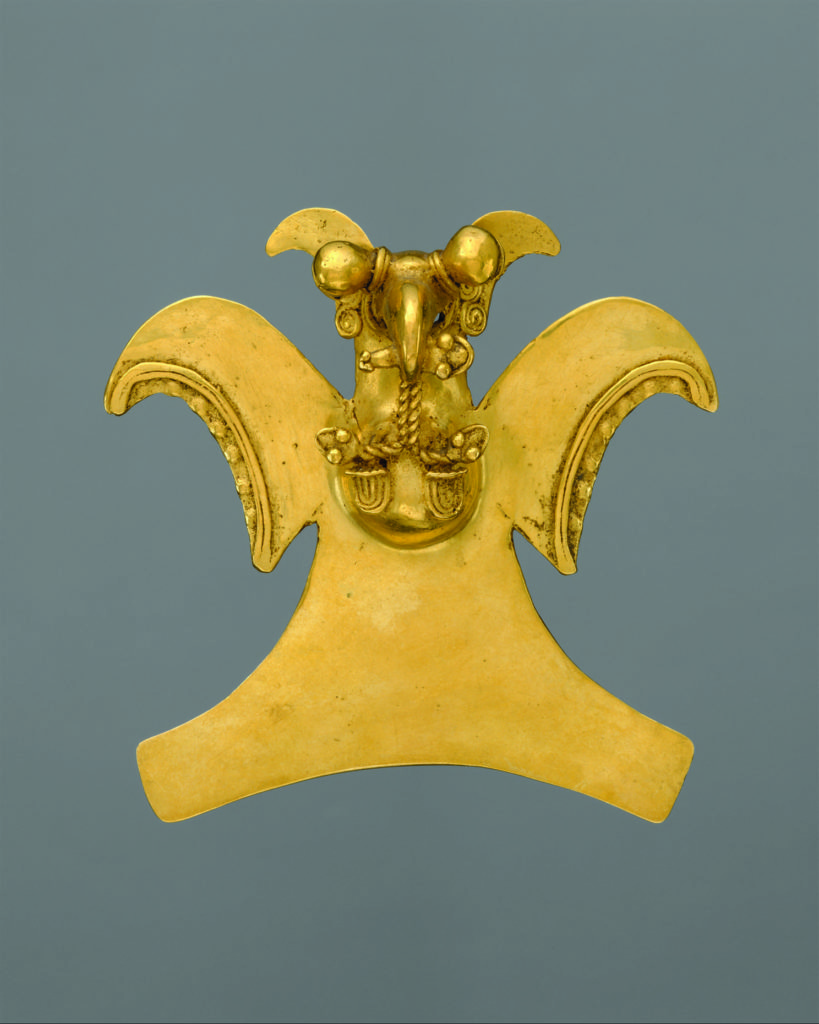 The Columbian encounter sparked an intensified European passion for gold, and set in motion a cascading series of events that resulted in a devastating loss of native traditions, material culture, and lives. This European obsession with gold and other rare metals perplexed many indigenous peoples, for, to them, other materials were often of far greater value. A new exhibition, Golden Kingdoms: Luxury and Legacy in the Ancient Americas, coorganized by the J. Paul Getty Museum, the Getty Research Institute, and the Metropolitan Museum of Art, explores the development of luxury arts, from delicate works in shell to brilliant displays of gold, from approximately 1000 BC to the arrival of Europeans in the early sixteenth century. The exhibition expands our understanding of the arts of the ancient Americas, as it examines a category of arts once abundant in the region but especially prone to destruction. As a result, our view of ancient American art has been primarily shaped by works in more durable materials—monumental stone sculptures or ceramic vessels—objects less subject to the avarice of European invaders. As spectacular and sophisticated as these traditions of stone-carving and ceramics were, they were only part of what once constituted ancient American art. 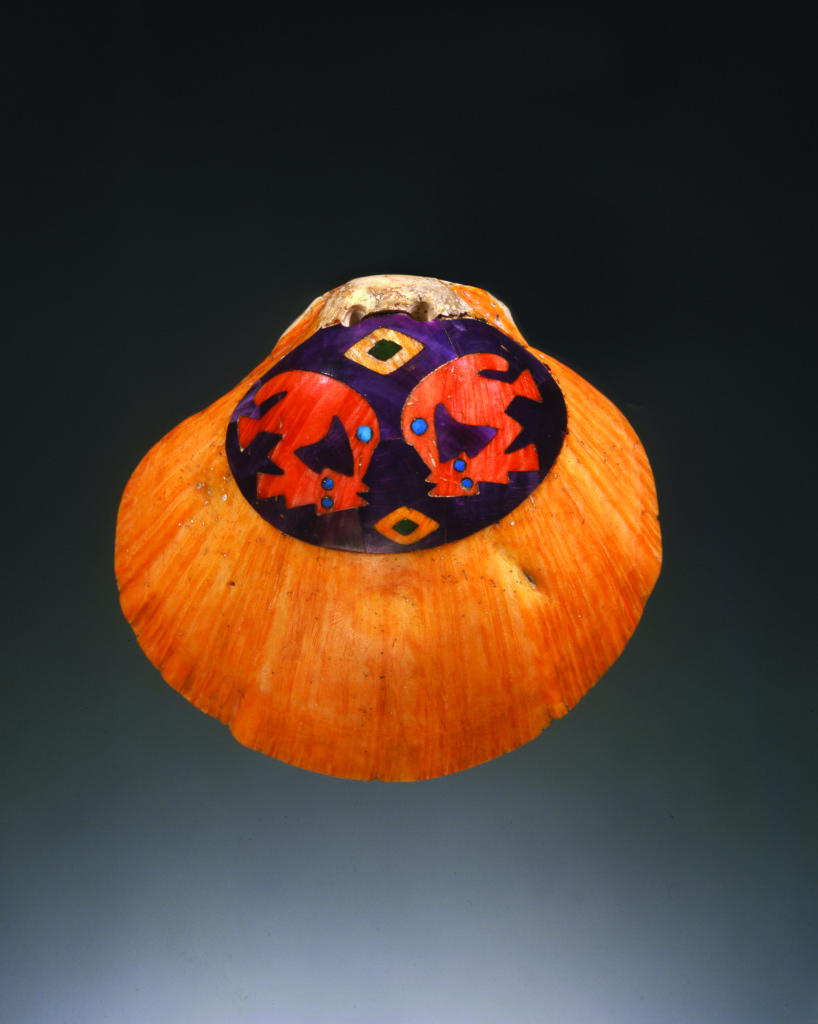 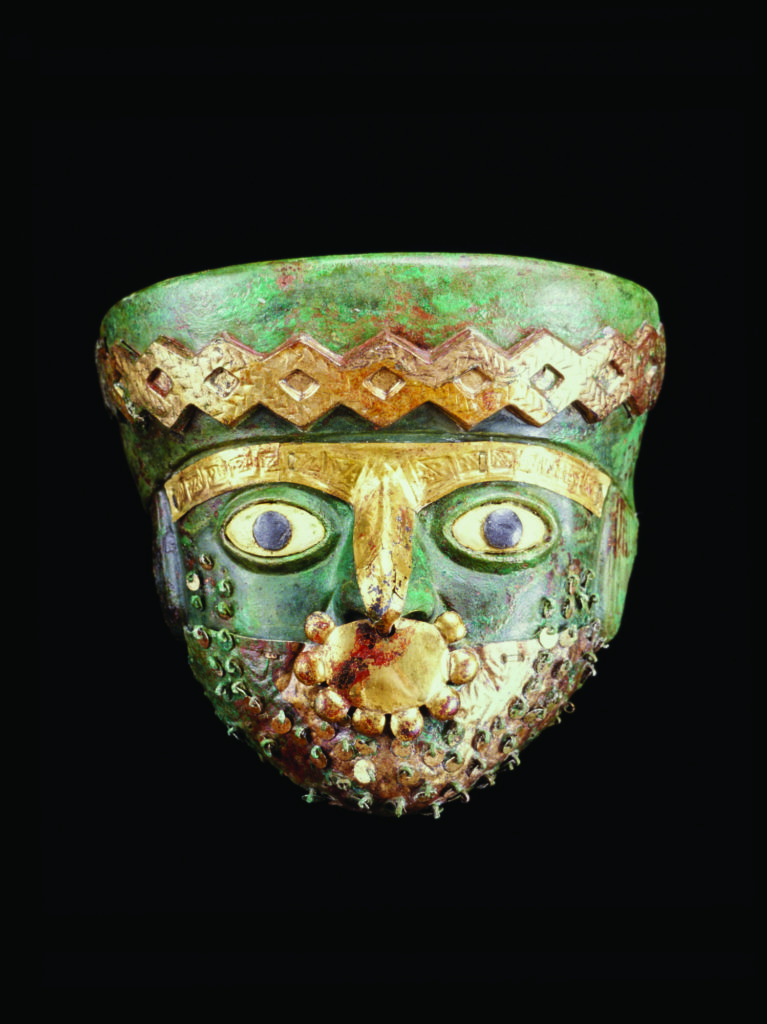 Gold was first exploited in the Andes by the second millennium BC, and from there, metalworking technology gradually spread north, reaching Central America by the first centuries AD and arriving in central Mexico before the end of the first millennium. Among the earliest works of art in gold from the ancient Americas is a nose ornament—sometimes called a mouth mask, as it would have obscured much of the lower face—from a tomb of an older male at the site of Kuntur Wasi, high in the Andes mountains of Peru (Fig. 1). A snarling, fanged feline deity—perhaps a jaguar—grasps two figures, shown in profile. Seven of an original eight feline heads dangle from the sides. One of the striking aspects of metalworking in the ancient Americas is that it first developed for the purpose of creating ritual and elite regalia, rather than for tools, weapons, or currency. This sophisticated tradition of making prestige objects in gold for gods, kings, and queens—and its gradual transmission northward—provides the narrative trajectory of the exhibition. 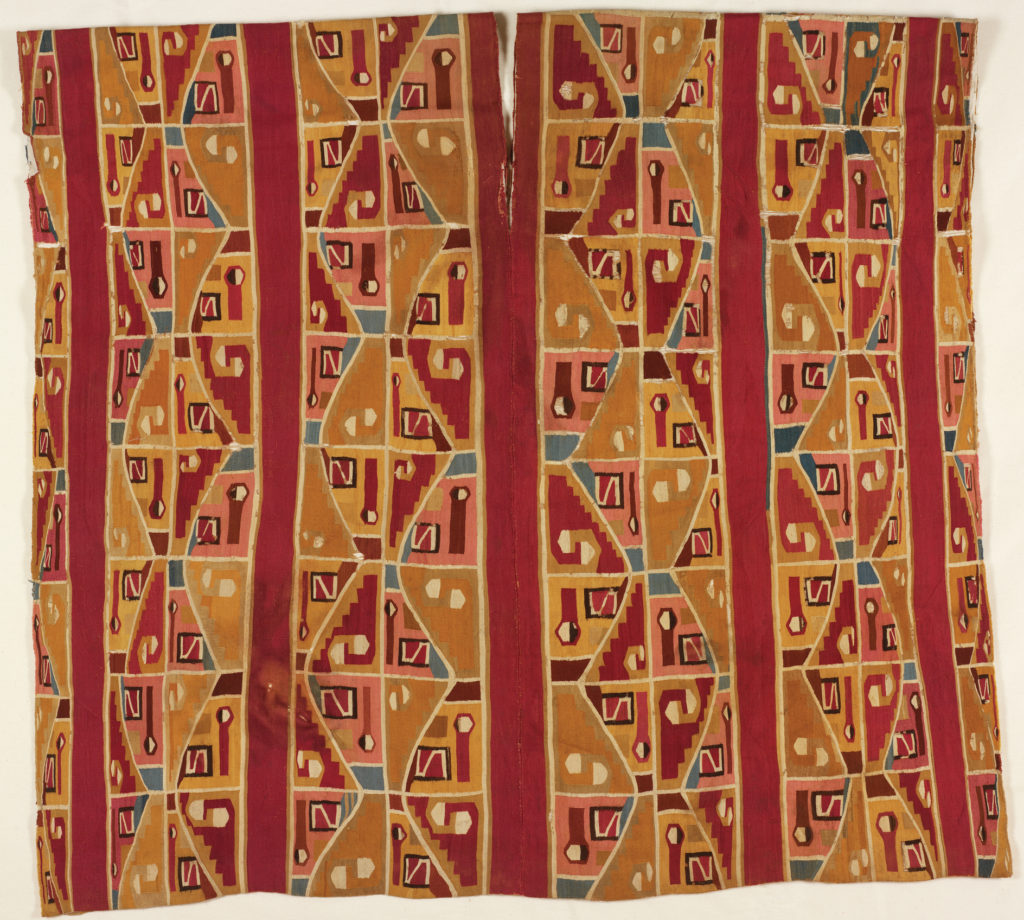 In certain times and places, however, other materials were considered far more valuable than gold. Writing in 1572, the Spanish colonial administrator Pedro Sarmiento de Gamboa, for example, noted that in the Andes, home to the Inca Empire, natives esteemed a red shell—almost certainly Spondylus, a spiky bivalve—more than silver or gold (Fig. 3). In Mesoamerica, the cultural region that encompassed the area from what is now Honduras to Mexico, where the great Maya city-states and the powerful Aztec Empire flourished, green and blue stones such as jade and turquoise were arguably the most sacred and precious materials (Figs. 3, 6, 9). And throughout the Pre-Columbian Americas, finely woven tapestry garments and feather works were among the most labor-intensive and highly prized luxury objects of all (Fig. 5). 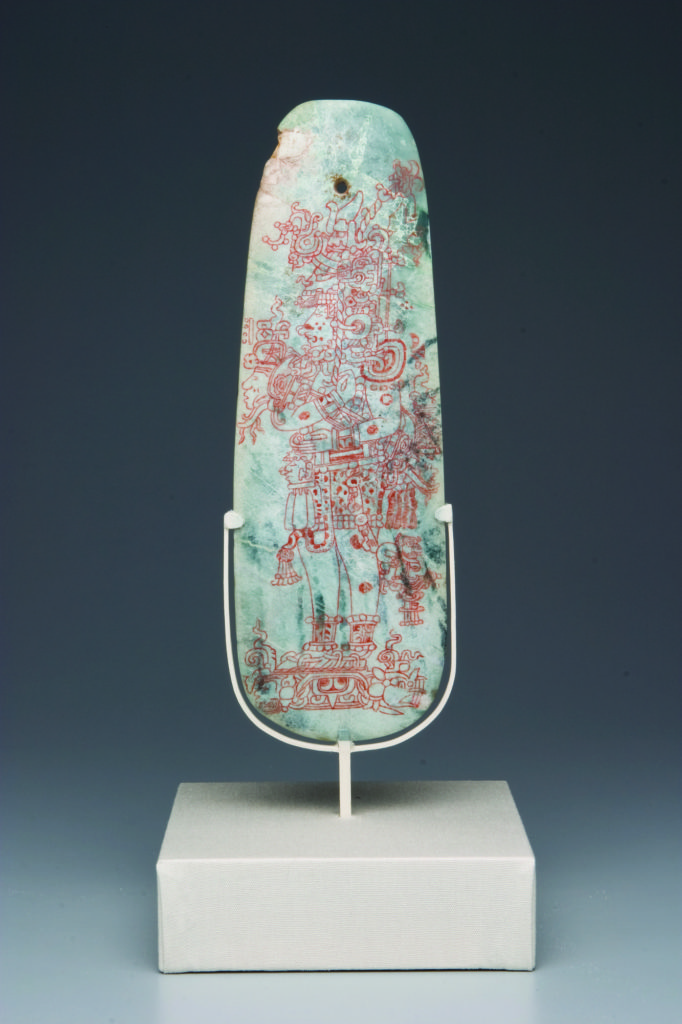 Over the past four years, my co-curators, Timothy Potts, director of the J. Paul Getty Museum, and Kim N. Richter, senior research specialist at the Getty Research Institute, and I, along with a team of art historians, archaeologists, and conservators from across Latin America, Europe, and the United States, joined together to investigate indigenous ideas of preciousness and luxury. How did individuals in the past, both collectively and independently, make aesthetic and material choices? And how did such choices express their deepest beliefs? Rarity, along with the visual, tactile, and aural qualities of materials, mattered—but so, too, did the connections between these substances and powerful gods. The materials of ancient American luxury arts were probably universally considered divine—that is, they were emitted, inhabited, or consumed by gods. The ancient Maya, for example, considered stone animate, of the earth but transcendent, and closely aligned with sacred powers of the sky and rain. 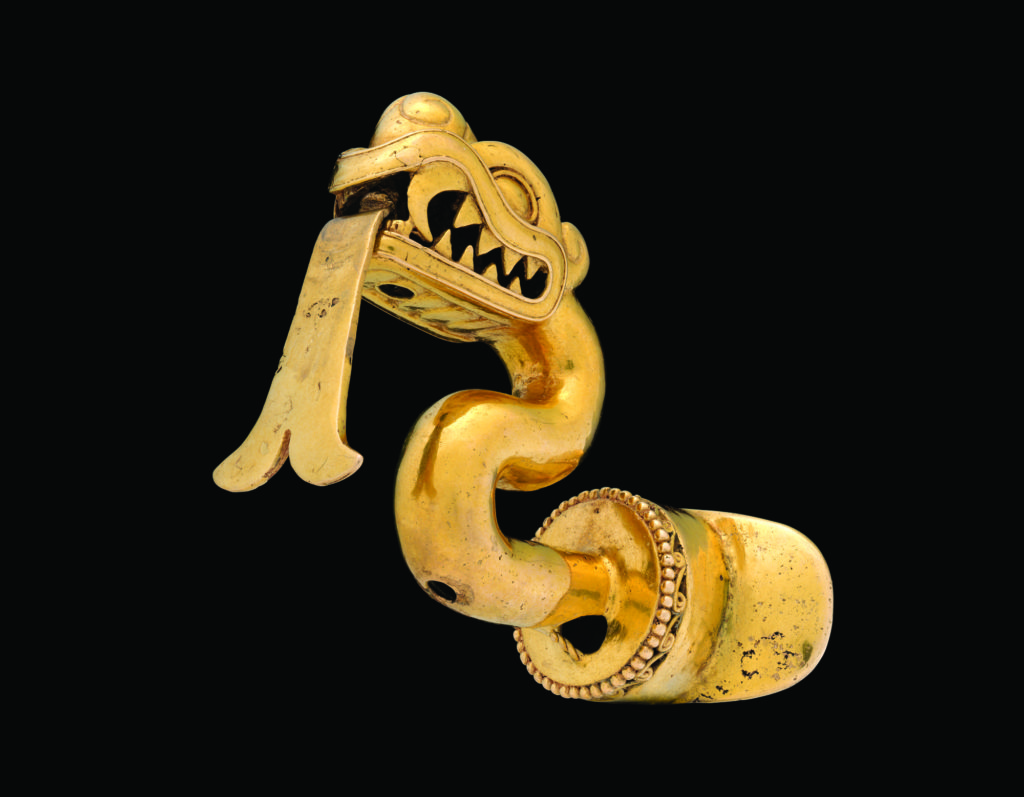 Instead of offering a comprehensive survey of all ancient American cultures, Golden Kingdoms concentrates on the major spheres of gold-working in the lands between the two great imperial capitals of the ancient Americas: Cusco, the seat of the Inca state, and Tenochtitlan, the Aztec capital now buried under Mexico City. This selective view allows a sharply focused and deep consideration of regimes of value, both in the past and in our own times. We focused on specific places and moments in time when extraordinary heights of artistic development were achieved. These crucibles of innovation were most often found, not surprisingly, in the more densely populated urban centers, or around royal courts and other seats of power. Such places were, critically, the locus of patronage. We live in a time when we think of art as being initiated and produced by independent artists, but that is a relatively recent development in the history of world culture. Through most of that time, the production of works of art was initiated by a patron for a particular purpose. Such patrons would supply the rare materials to be used, and, as a result, people with specialized skills coalesced around them to give form to their will. In such an environment, artists could be exposed to new ideas and inspired by what others were creating. Intense competition sometimes resulted, as the deep, indeed deadly, rivalry among the Moche courts or the Maya city-states played out in the visual arts as well. Artists were important to statecraft: when the Incas conquered Chan Chan—capital of the Chimú culture, which thrived from about 1000 to 1470 on Peru’s northern coast—they took the Chimú gold- and silversmiths to Cusco, where they were pressed into service for the newly dominant imperial power. 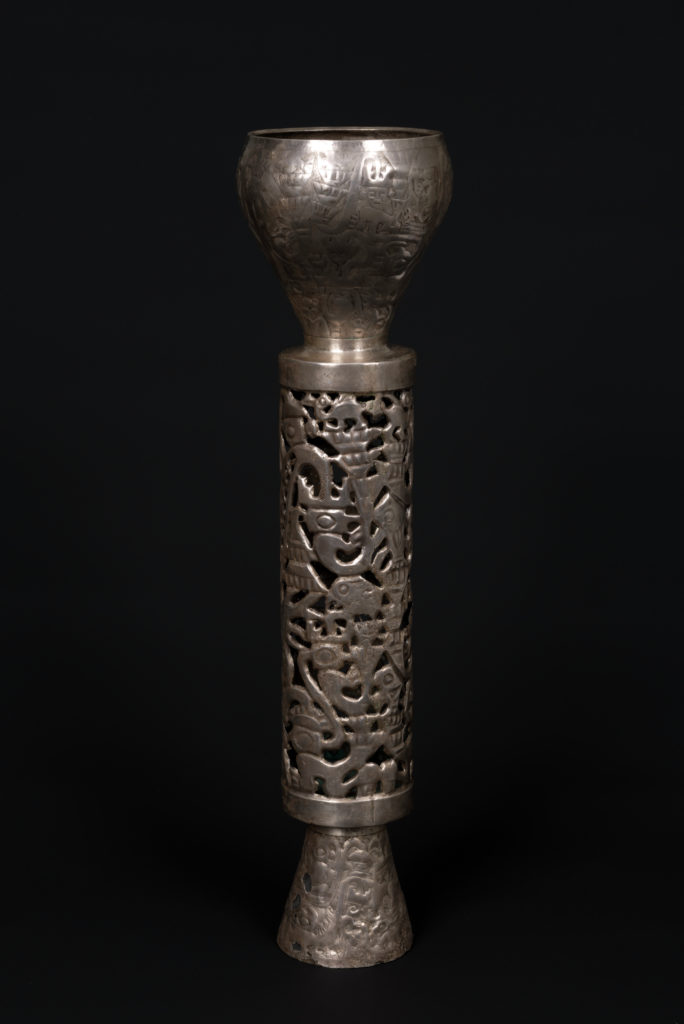 Golden Kingdoms features more than three hundred objects gathered from fifty-seven museums in thirteen nations, including many that have been excavated in recent years, and others that have rarely, if ever, left their country of origin. Recent archaeological discoveries have given us important fresh insights—among them, the prominence of high-status women across the Americas. Exquisitely crafted ear and nose ornaments, for example, once thought to be worn exclusively by men in ancient Peru, are now known to have been worn also by female rulers and priestesses. A woman who ruled around AD 400, dubbed the Lady of Cao for the site on the Peruvian coast where her tomb was excavated just over a decade ago, was laid to rest with war clubs and spear throwers, and some forty-four exquisitely crafted silver and gold nose ornaments (Fig. 9). 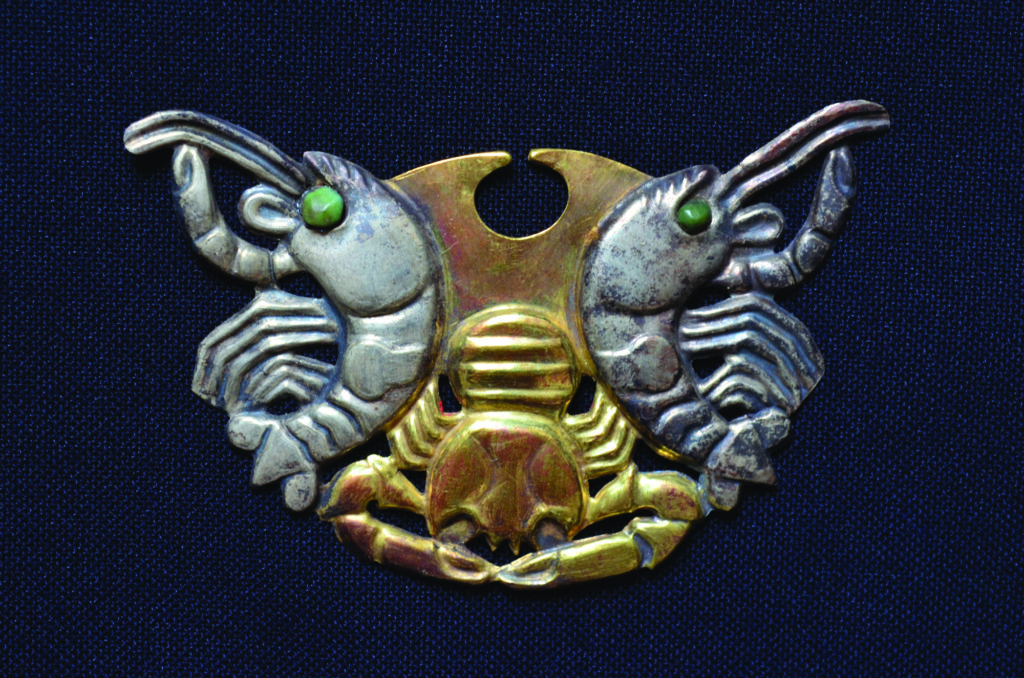 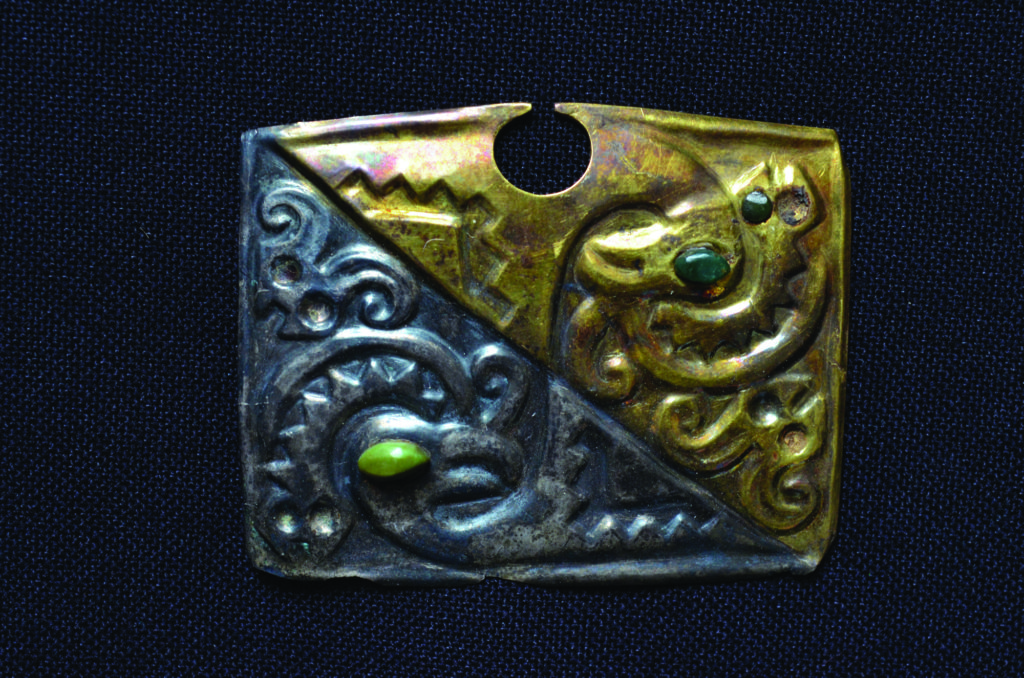 The artworks featured in Golden Kingdoms are the exceptional, the rare, the transformative—items designed to provoke strong emotions, particularly desire and wonder. Although gold-working became popular in ancient Mexico only after about AD 1000, metalsmiths there quickly mastered the intricacies of lost-wax casting and created works of great power. An Aztec labret—an ornament worn inserted through a pierced opening in the lower lip—in the shape of a snake ready to strike displays impressive technical mastery, as the bifurcated tongue was ingeniously cast as a moveable piece, and could be retracted, or swung from side to side, perhaps moving with the wearer (Fig. 7). Such precious works, testaments to the brilliance of pre-Columbian courts and their artists, restore a sense of the refinement and complexity of the visual arts of the ancient Americas while poignantly reminding us of the fragility of cultures. In these deeply resonant works, tangible connections to worlds now almost entirely lost to us, the great imagination and artistry of ancient Americans live on. 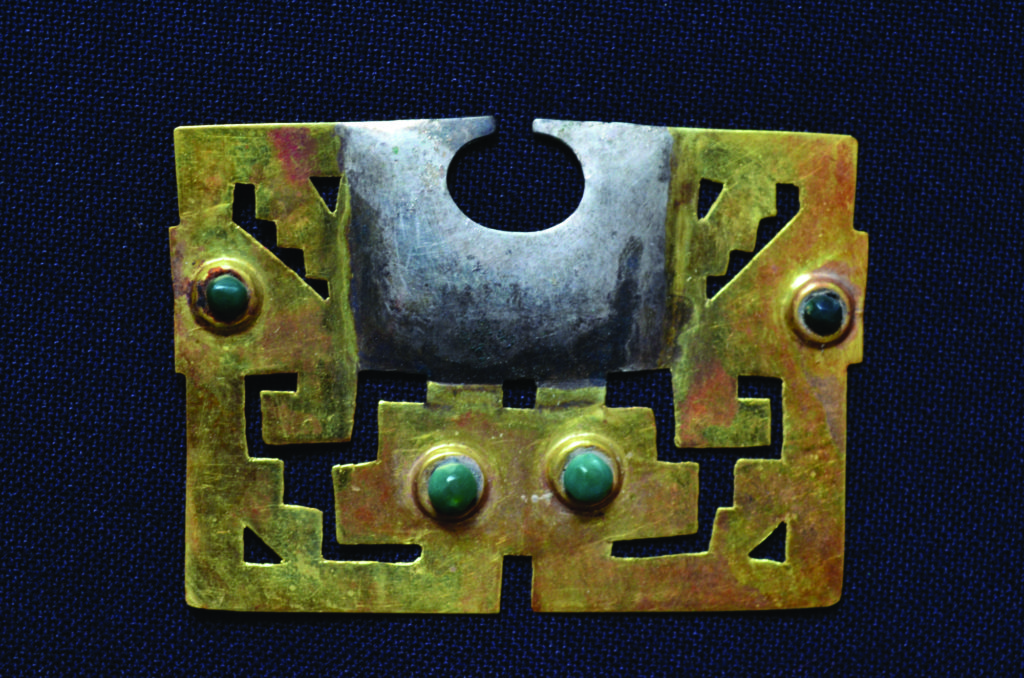 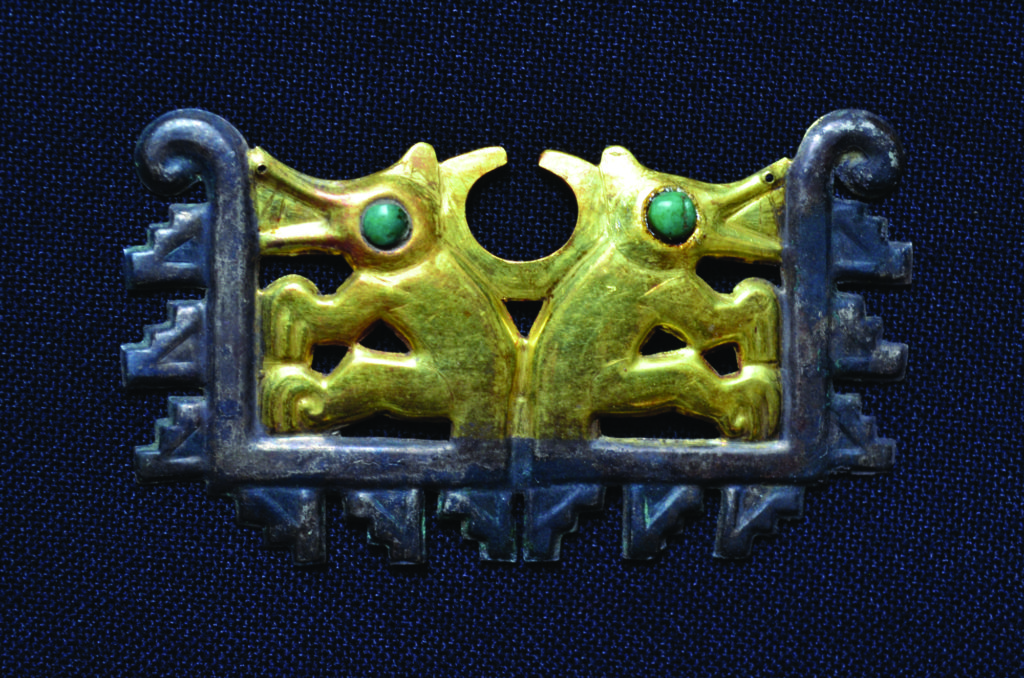 Golden Kingdoms: Luxury and Legacy in the Ancient Americas is on view at the J. Paul Getty Museum at the Getty Center, Los Angeles, through January 28, 2018, and at the Metropolitan Museum of Art, New York, from February 27 through May 28, 2018. The exhibition is accompanied by a full-color catalogue published by the J. Paul Getty Museum and the Getty Research Institute, edited by the exhibition curators.

JOANNE PILLSBURY is the Andrall E. Pearson Curator of Ancient American Art at the Metropolitan Museum of Art.