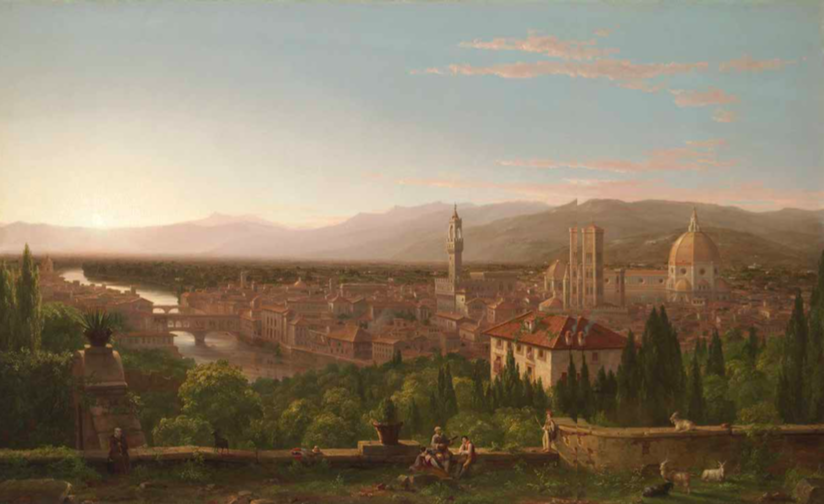 While Thomas Cole is recognized as one of the greatest American landscape painters, he was born in Britain at the height of the industrial revolution. He arrived on American soil exactly two hundred years ago, in 1818, as an economic migrant. The exhibition Thomas Cole’s Journey: Atlantic Crossings takes a new look at the artist and his legacy, and in the process, rethinks the emergence of landscape painting in the United States in the nineteenth century in a global context. 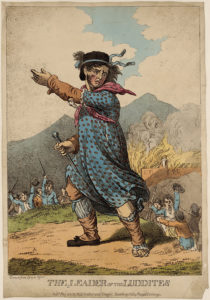 Fig. 2. The Leader of the Luddites, 1812. Inscribed “Drawn from Life by an Officer” at lower left and “Pubd, May 1812 by Me∫ss, Walker and Knight, ‘Sweetings Alley Royal Exchange.” at lower center. Hand-colored etching, 12 by 8 inches. British Museum, London, purchased from Andrew Edmunds, © Trustees of the British Museum.

This exhibition is the first to present Cole as an international figure, whose repeated voyages across the Atlantic shaped his worldview and artistic practice. It marks the first time since 1832 that Cole’s work will be shown alongside those of his British contemporaries, J. M.W. Turner and John Constable, among others. His engagement with the traditions of European art and thought paradoxically heightened Cole’s abiding passion for the American wilderness. As the first proto-environmental artist in America, Cole’s conservative, pastoral vision of the American ideal began to clash with the volatile commercial growth and brash imperial aspirations of the Jacksonian era, as revealed in his mature American works.

The exhibition is designed to take visitors on Cole’s artistic journey through six distinct periods of his life. He was born in 1801, at the height of the industrial revolution, in Bolton-le-Moors, near Manchester in northwestern England. Polluted and overcrowded, Bolton was surrounded by wild and beautiful countryside. Though the nation’s recent prosperity derived from industry, few artists attempted to paint the modern city. Philippe Jacques de Loutherbourg and J.M.W. Turner, however, were impressed by the demonic spectacle of forges and factories at work, discovering sublimity in the industrial landscape. Works such as theirs provide a glimpse into the landscape of Cole’s childhood. As a young boy, he worked in a textile factory and witnessed the worst effects of industrialization—factory burning, machine breaking, and social unrest. These early experiences, the exhibition argues, profoundly influenced his later attitudes toward nature and industry. 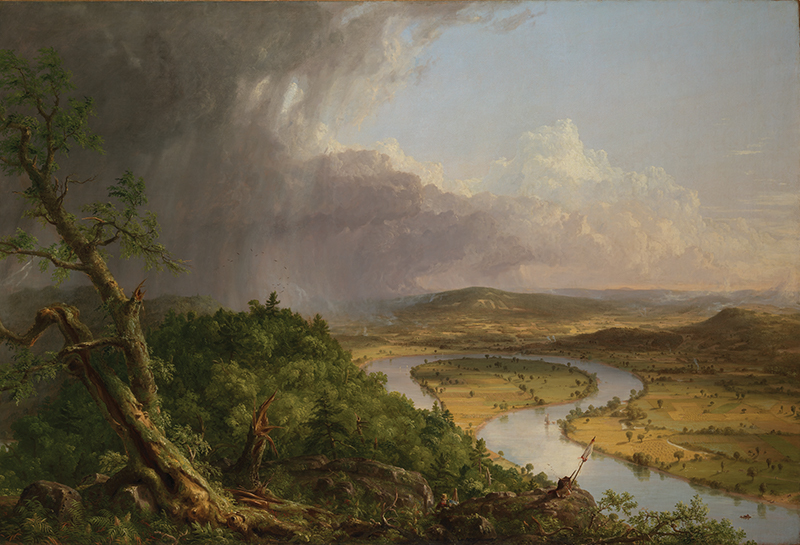 During Cole’s childhood, Bolton saw arson and machine-breaking attacks by the Luddites, groups of unemployed workmen whose jobs had been replaced by new machinery. The satirical image, The Leader of the Luddites (Fig. 2), depicts Ned Ludd, the mythical figurehead of the Luddites, leading a band of laborers driven to violence. Times were hard. e failure of his father’s business forced the teenage Thomas, highly educated and interested in poetry and music, to once again take employment in a factory, where he worked as an engraver of the blocks from which calicoes, colorful cotton fabrics, were printed. In 1817 he moved with the family to Liverpool, and became an apprentice in an engraver’s shop. ere he likely had the chance to see prints after works by leading artists of the era. 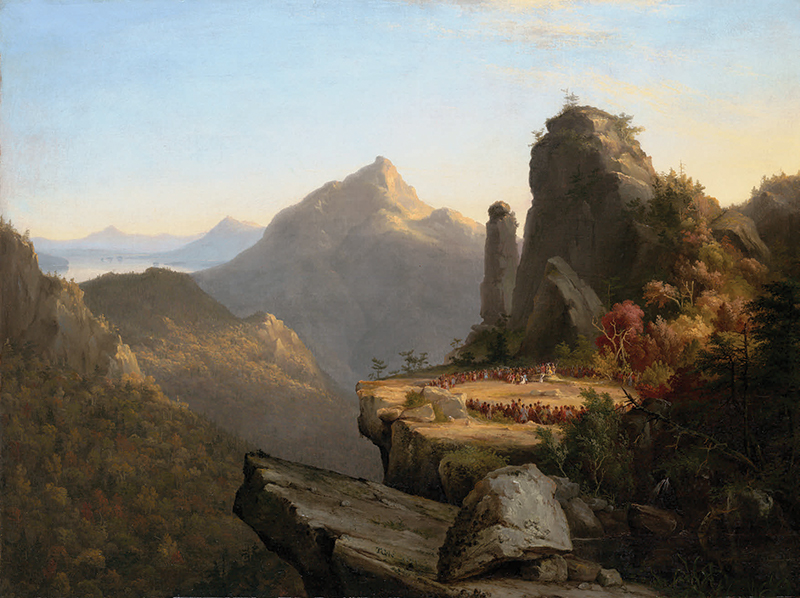 Unable to make a living in England, James Cole, his wife, three daughters, and seventeen-year-old son, Thomas, sailed in 1818 from Liverpool to Philadelphia with high hopes. Though portraiture and history painting were well established, landscape, thriving in Britain, was yet to emerge as an important art form in the United States. In 1820, also recently arrived from England, the artist Joshua Shaw began to publish Picturesque Views of American Scenery. His prints, like those of the Hudson River Portfolio, published by John Hill after William Guy Wall between 1824 and 1826, revealed new possibilities for American landscape art.

Determined to become an artist, Cole learned from borrowed textbooks and took lessons from an itinerant painter. In his early depictions of the Hudson River valley, he introduced a bold, dramatic style to the New World, as he embraced pure American wilderness as a novel subject for landscape art. In 1825 he moved to New York City and that summer he took a steamboat up the Hudson River, where he made sketches near Catskill, New York. Eliminating all signs of tourism, these bold early paintings, such as View of the Round-Top in the Catskill Mountains (Sunny Morning on the Hudson) (Fig. 4), were an instant success. Cole also aspired to create landscapes that engaged with literary and religious themes, “a higher style of landscape,” as he wrote to his patron Robert Gilmore, on May 21, 1828. He took subjects from the writings of James Fenimore Cooper, such as Scene from “The Last of the Mohicans,” Cora Kneeling at the Feet of Tamenund (Fig. 5), and, in The Garden of Eden, painted a large and ambitious biblical landscape. 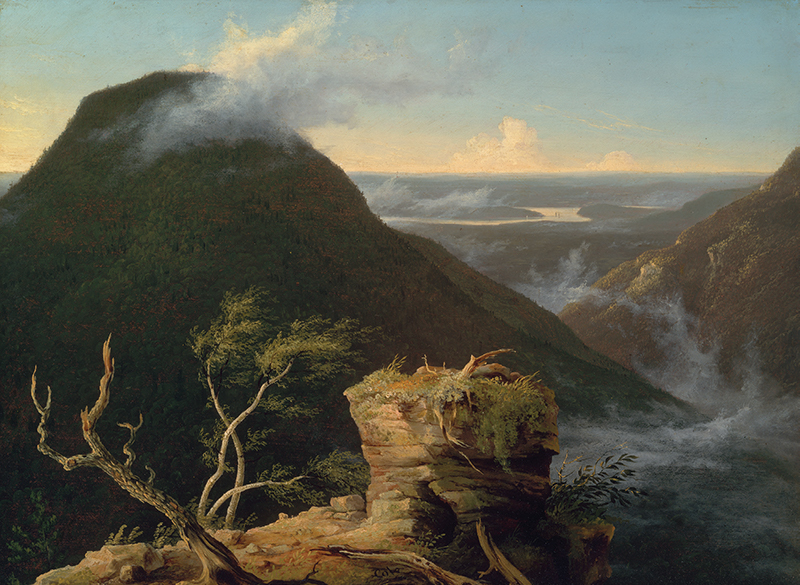 To build on his initial success, at the age of twenty-eight, Cole decided to make a study trip to Europe. Americans of this period regarded London—the political and mercantile hub of the British Empire and a modern city of a million people—as the leading European capital. In May 1829, after a little over a decade in the United States, Cole returned to Europe, visiting England and Italy over the next three years. In London he studied museum collections and met the leading landscape painters of the age, including Turner and Constable.

The London collections held riches for the young artist. He visited the newly opened National Gallery and was enraptured by the landscapes of the seventeenth-century French painter Claude Lorrain. Soon after arriving, Cole saw Hadleigh Castle, The Mouth of the Thames—Morning after a Story Night, by Constable (Fig. 7), with whom he developed a friendship. Constable’s image of a lonely tower haunted Cole for the rest of his life. He was also deeply inspired by Constable’s masterful cloud studies. His response to Turner was ambiguous. Cole greatly admired Snow Storm: Hannibal and His Army Crossing the Alps (Fig. 6), which he saw in Turner’s studio. The painting, with its sublime swirling vortex, had a lasting impact on Cole, seen most notably in his execution of his most iconic American works: The Oxbow and The Course of Empire. When the two met, however, the young American was surprised by the British painter’s rough appearance and found his recent work too wildly experimental. Cole hoped to achieve success with his own work in London. Although he exhibited grand-scale American landscapes, they were largely ignored by critics and the public. 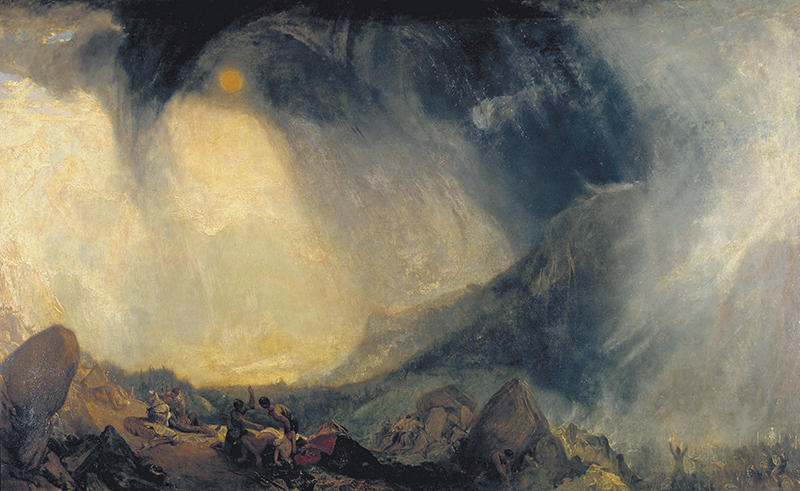 Following a brief stay in Paris, Cole arrived in Italy in June 1831. He first spent nearly eight months in Florence, finding camaraderie among the small community of American artists in the city, including sculptor Horatio Greenough and painter John Cranch. Cole dedicated substantial effort to studying the figure in Florence and continued to hone his plein-air sketching skills, executing graphite drawings and oil studies in the Tuscan countryside. His grand scale, beautifully rendered 1837 View of Florence (Fig. 1) resulted from this period of study. Cole then traveled to Rome, where he resided from February to May 1832. Absorbing the lessons of the classical and Renaissance past, he visited the Colosseum, the Pantheon, the Roman Forum, St. Peter’s Basilica, and the Vatican. He was especially drawn to the Roman Campagna, once the favorite subject of Claude Lorrain. He sketched sections of an ancient Roman aqueduct, as seen in Campagna di Roma (Study for Aqueduct near Rome) (Fig. 8), in preparation for his painting Aqueduct near Rome, and visited Tivoli, where he also worked outdoors in oil. Back in his beloved Florentine studio in June 1832, Cole spent the summer painting views of the Italian landscape for American patrons, some of whom he had met in Italy. 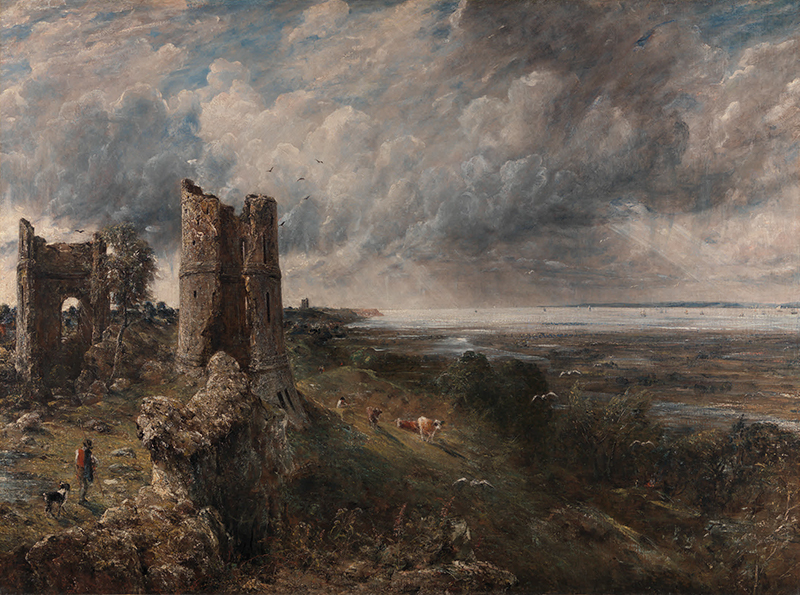 In the five years following his return to New York in November 1832, Cole painted many of his greatest works—creative responses to his experiences of British art and society and Italy’s Roman past. During this time, he also became a United States citizen, despite his discomfort with the changes underway in his adopted country. e artist’s global awareness came to bear in his “Essay on American Scenery” (published in 1836), which expressed Cole’s philosophy about the importance of the American landscape and presented a manifesto for establishing a tradition of American landscape art.

Cole worked simultaneously in his Catskill studio on his now-iconic The Course of Empire series (Fig. 9) and View from Mount Holyoke, Northampton, Massachusetts, after a Thunderstorm— The Oxbow (Fig. 3). These paintings embraced the panoramic mode, engaging viewers in the visual stories unfolding before them. In his “Essay on American Scenery,” and in these paintings, the artist addressed the dangers faced by the young nation under the expansionist policies of President Andrew Jackson, which led to drastic ecological, social, and economic changes, and he challenged the American public to consider the moral value of maintaining the sublime aspects of the landscape. 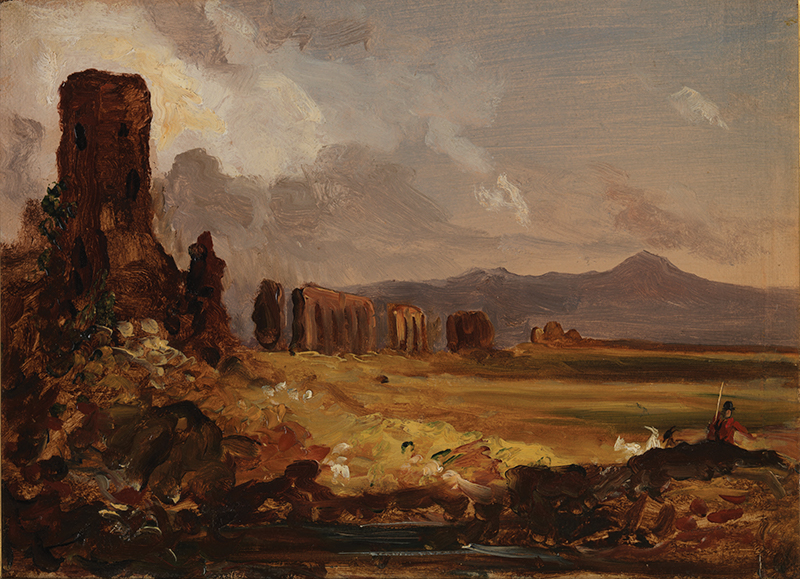 In The Course of Empire he depicted the historic cycle of the rise and decline of Old World civilizations, which he viewed as a disturbing portent of the United States. With The Oxbow he called on the American public to stop destroying God’s pure creation—the wilderness. In an extraordinary self-portrait, Cole has placed himself in the wilderness landscape at bottom center, confronting the viewer with his proto-environmental manifesto. These works respond to his European experiences while also expressing his abiding passion for the American wilderness. Horrified by the effects of industrialization on the landscape, Cole sent an impassioned visual warning to his fellow citizens about the harsh ecological cost of unchecked development of the land. 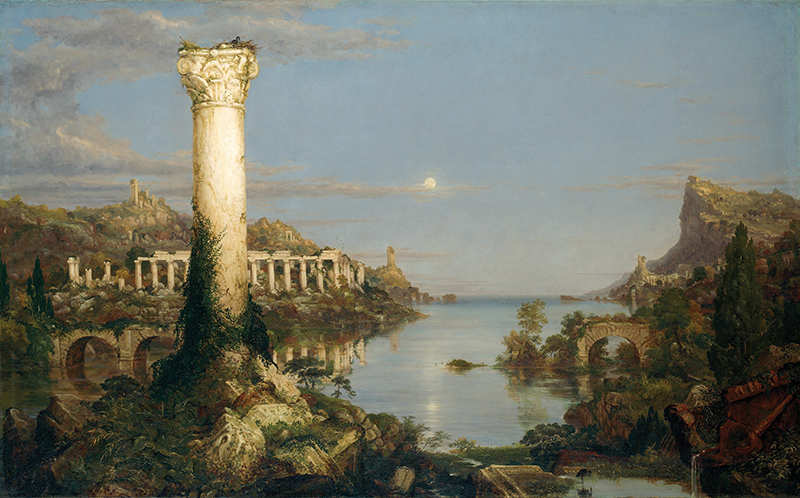 Fig. 9. The Course of Empire: Desolation by Cole, 1836. Oil on canvas, 39 by 63 inches. New York Historical Society, gift of the New-York Gallery of the Fine Arts; photograph by Oppenheimer Editions.

In his final years, Cole took on a number of students, the most important of whom was Frederic Edwin Church, who spent the years 1844 to 1846 in Cole’s Catskill studio. Church absorbed Cole’s reverence for the direct observation of nature and his practice of sketching and painting on-site studies. Cole also mentored his friend and colleague Asher Brown Durand, to whom he taught the art of painting out of doors. 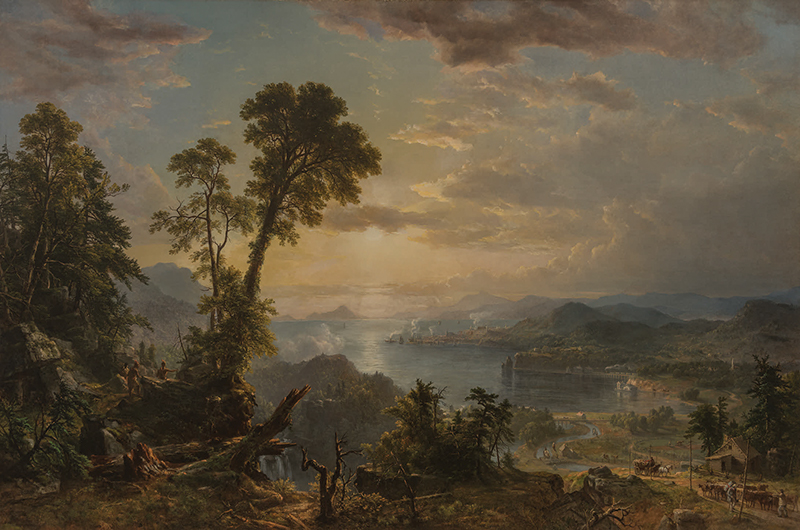 Cole died an untimely death in 1848, but his profound body of work launched the first national school of landscape painting in the United States. His extraordinary legacy is seen in the next generation of American landscape painters he had personally taught, notably Church and Durand, and his works continue to inspire artists today.The New York art world mourned Cole’s passing with a memorial ceremony and exhibition, and a series of commemorative paintings. Both Church, in Above the Clouds, and Durand, in Kindred Spirits, painted landscapes that pay homage to their friend and mentor.

Cole’s iconic paintings grappled with profound issues of national destiny and environmental preservation. While successive generations of American landscape painters drew critical lessons from Cole, they moved in new directions after mid-century. Artists such as Durand—as demonstrated by his 1853 painting Progress (The Advance of Civilization) (Fig. 10)—fully embraced the doctrine of Manifest Destiny, which asserted a God-given justification for nationalist expansion—the very antithesis of Cole’s beliefs.

A scholarly catalogue accompanies the exhibition, published by the Met. The project was inspired by a collegial conversation between myself and Tim Barringer, Paul Mellon Professor of the History of Art at Yale University, during his fellowship year in the American Wing in 2013/2014. We were then joined by Christopher Riopelle, curator of post-1800 paintings at the National Gallery, London. Shannon Vittoria, research associate in the American Wing, has also been a critical member of the curatorial team.

ELIZABETH MANKIN KORNHAUSER is Alice Pratt Brown Curator of American Painting and Sculpture at the Metropolitan Museum of Art.