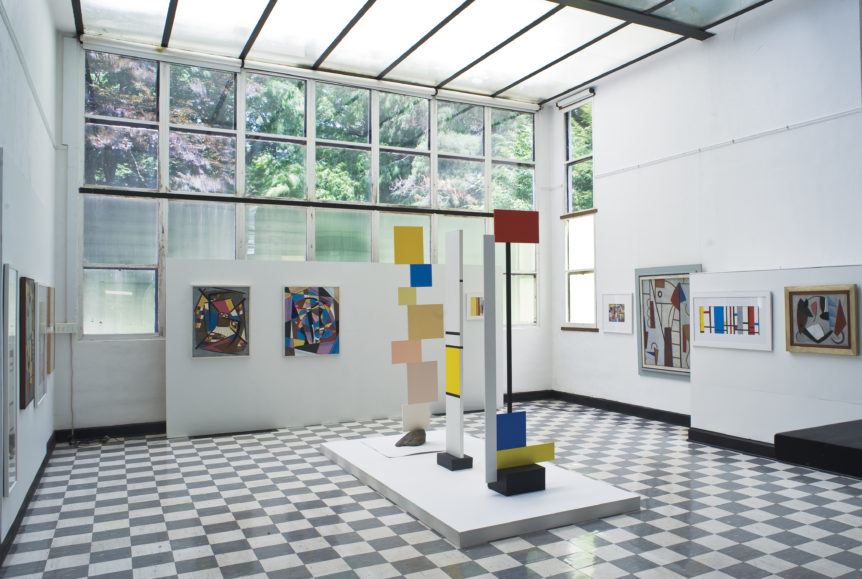 Night Bombing by George L. K. Morris (1905-1975), 1942. Signed and dated “Morris 42” at lower right. Oil on canvas 62 by 52 inches. The objects illustrated are in the collection of the Frelinghuysen Morris House and Studio, Lenox, Massachusetts.

The place is startling even when you know it’s coming. Part of the surprise stems from the location: the old and selfassured village of Lenox, Massachusetts—the Berkshire Mountains summer seat of Gilded Age worthies who built estates with names like Holmwood and Tanglewood and Bellefontaine and Belvoir Terrace. But it’s more the cinematic reveal that follows an approach up a long, narrow lane and across a bridge over a little brook, the whole passage shaded by maples and pines. Then boom—the sudden appearance of a spanking white stucco assemblage of geometric volumes, a house that is a cousin to the buildings of the Stuttgart Weissenhofsiedlung and Le Corbusier’s Villa Savoye. What the hell is that doing here?

The Frelinghuysen Morris House and Studio dates from 1930 and is reputed to be the first modernist edifice in New England. If anyone wants to split hairs about that designation, it was certainly the first building in that part of the country to embody the fresh, progressive, vigorous spirit of the European born creative movement. Suzy Frelinghuysen and her husband, George L. K. Morris, were artists, part of a small group known as the Park Avenue Cubists. In the 1930s, at a time when regionalism and American scene painting were the order of the day, they were committed to abstraction, making work full of fractured imagery and floating forms. Morris and Frelinghuysen were radicals in their way, and as their home and lifestyle suggest, they were cordial ambassadors for the new type of art. They were avant-garde without being rude about it.

Both were well-off and well-bred. George Lovett Kingsland Morris was born into New York’s Knickerbocker aristocracy. His father, Newbold Morris, was a direct descendant of Lewis Morris, a signer of the Declaration of Independence; his mother, Helen, was a Schermerhorn. The family kept homes in Manhattan and Paris, and had a Georgian revival estate in Lenox called Brookhurst. Morris was educated at Groton and Yale. Estelle Condit Frelinghuysen, dubbed Suzy by her brothers, came from a New Jersey family with a less distinguished, but no less honorable history of public service. Her grandfather was secretary of state in the Chester A. Arthur administration. She grew up in Princeton and at the family mansion on the Jersey shore, receiving a classic young lady’s education that was heavy on musical instruction and voice training.

Frelinghuysen and Morris hit it off during an intermission at a Metropolitan Opera performance in 1933, and they married in 1935. By then, Morris had embarked on a career as a painter, sculptor, critic—and a key advocate for abstract art in America.

Morris’s pivotal encounter with modern art came by chance. He was spending the summer of 1927 studying painting in Fontainebleau, near Paris, when he happened to run into Albert Eugene Gallatin, an older cousin and family friend. A wealthy artist and collector, Gallatin had made yearly trips to Europe gathering works by Pablo Picasso, Fernand Léger, Georges Braque, and other artists of the School of Paris. He introduced an enthralled Morris into their circle. Later that fall in New York, Gallatin opened the Gallery of Living Art—the first contemporary art museum in the United States.

Upon graduating from Yale in 1928, Morris enrolled at New York’s Art Students League, where his teacher was the Ashcan school artist John Sloan. But his interest in abstraction lured Morris back to France in 1929, and there he became fast friends with many of the leading modernists, among them Léger, Piet Mondrian, Robert Delaunay, Jean Arp, and Sophie Taeuber-Arp. Morris bought their work and that of others, including Picasso, Henri Matisse, Juan Gris, Braque, and Joan Miró—buying art not simply to collect it but to study it. Toward the end of the year, Morris began art classes with Léger and Amédée Ozenfant at the Académie Moderne in Paris.

The house and studio from approach. Photograph by John Mark Hall.

The sojourn in Paris marked a turning point in his life and art. While Morris’s color palette and brush work resemble those of Léger, representative figuration disappeared from his canvases, replaced by concise, studied compositions of flat geometric planes. Morris also began to promote abstraction in the art press. In 1937 he joined forces with Gallatin, Taeuber-Arp, and others to publish a French-English art journal called Plastique (which lasted for five issues). There, and in the pages of the Partisan Review—which Morris joined that same year as an art critic, while providing financial support for the magazine—he argued many times and passionately for the notion that contemporary nonfigurative painting and sculpture were a logical step in the evolution of art.

The Paris art world also changed Morris’s lifestyle. He was fascinated by the airy, clean-lined house and studio that Le Corbusier designed for Ozenfant. In 1930, with the help of Boston architect George Sanderson, his Yale classmate, he built a studio on a rise a few hundred yards from the mansion on his parents’ Lenox estate: a white near-cube with a northfacing wall of windows and a sawtooth roof with skylights (Fig. 5). A decade later, Morris worked with local architect John Butler Swann to design a house as an addition to the studio. The result was a Bauhausian composition of narrow block forms, with a glass-walled semicircular stairwell as a grace note. To help finance construction, Morris consigned a Picasso cubist work, The Poet, for sale. The buyer was Peggy Guggenheim.

The studio was built in 1930 on the grounds of Morris’s parents’ estate, Brookhurst. This photograph dates from approximately that year.

The building is now open to the public in the summer months, and to enter off the graveled forecourt is to be transported to a day of sure faith in the march of progress—down to the then-state-of-the-art fluorescent lighting fixtures. Frelinghuysen and Morris are announced as artists in the foyer. Suzy took up painting seriously shortly after she married Morris, and her early work was heavily influenced by Braque and Gris. Her 1938 cubist still life of a bistro tabletop tableau, Printemps (Fig. 8), hangs on the wall on the left side of the entry hall. To the right is a curving marble staircase. It embraces Morris’s 1936 sculpture Configuration, and the stairway walls are covered in a bright, energetic fresco of his making. (The staircase originally had no bannister, but out of a concern for safety, Morris finally designed and installed one.)

From the entry, the layout directs guests to the living room on the right—you pass a vest-pocket cocktail bar tucked beneath the stairs—or left into the dining room, or straight ahead to a back garden with flower beds and a lawn that sweeps down to a pond. Frelinghuysen and Morris each put their mark on one of the public rooms. Suzy’s blue and black frescoes enliven the dining room (Fig. 4). George painted frescoes—inset with verre églomisé panels—in the living room, and installed an abstract marble bas relief above the fireplace (Fig. 7). The furnishings include pieces by several of the greats of prewar American and Scandinavian modern design: Gilbert Rohde, Donald Deskey, William Lescaze, Paul T. Frankl, Alvar Aalto, and Bruno Mathsson. Perhaps the most marvelous thing about the house is the treatment of the artwork that Frelinghuysen and Morris collected. A Léger here, a Miró there, a Paul Klee down the hall— the paintings are hung casually, without hierarchy or look-at-me spotlights. These were, after all, the work of friends and acquaintances.

The dining room, with blue and black frescoes painted by Frelinghuysen. Hall photograph.

Morris had done well for those artists. By the late 1940s, he had triumphed in his long campaign to gain broad acceptance for abstract art. But if he won the war, Morris lost the peace. He believed that art should strive for objectivity and universality, and that cubism and the variants developed by the artists of the School of Paris attained those goals. But a different view of abstract art rose to prominence in the United States, as critics such as Clement Greenberg championed Jackson Pollock and other abstract expressionist painters whose work manifested the will and ego of the individual. In an America ascendant after World War II, no one wanted to look to Europe for inspiration anymore.

The living room, with frescoes and a marble bas relief sculpture above the fireplace by Morris. On the wall to the left of the fireplace is Composition by Fernand Léger (1881-1955), 1920. Hall photograph.

Meantime, even as she continued painting, Frelinghuysen returned to her first love: music. Under the name Suzy Morris, she debuted in 1947 to acclaim in the New York City Opera production of Ariadne auf Naxos. A dramatic soprano, she enjoyed even greater success the following year in Tosca. But her opera career was derailed by a bout of bronchitis in 1951, and she retired from singing. Her artwork continued to develop, embracing expressive, gestural brushwork. Morris continued to plumb geometric abstraction. A highlight of his later career is a group of paintings composed of small rectangular elements arranged in a swirling pattern that presages the op art of the 1960s.

Morris painting in the studio in a photograph c. 1930.

On June 26, 1975, the car in which Frelinghuysen and Morris were driving near the village of Stockbridge was struck by a tractor trailer. George died instantly. Suzy recovered and lived until 1988. In her will, she stipulated that the Lenox house and its art collection be used for educational purposes. And so they have.

The studio is often used as an exhibition space, as seen here for a 2014 work of Morris and artist Harry Holtzman (1912-1987). Hall photograph.

The Frelinghuysen Morris House and Studio at 92 Hawthorne Street in Lenox, Massachusetts, is open to the public from June 22 to Labor Day. Frelinghuysen.org.