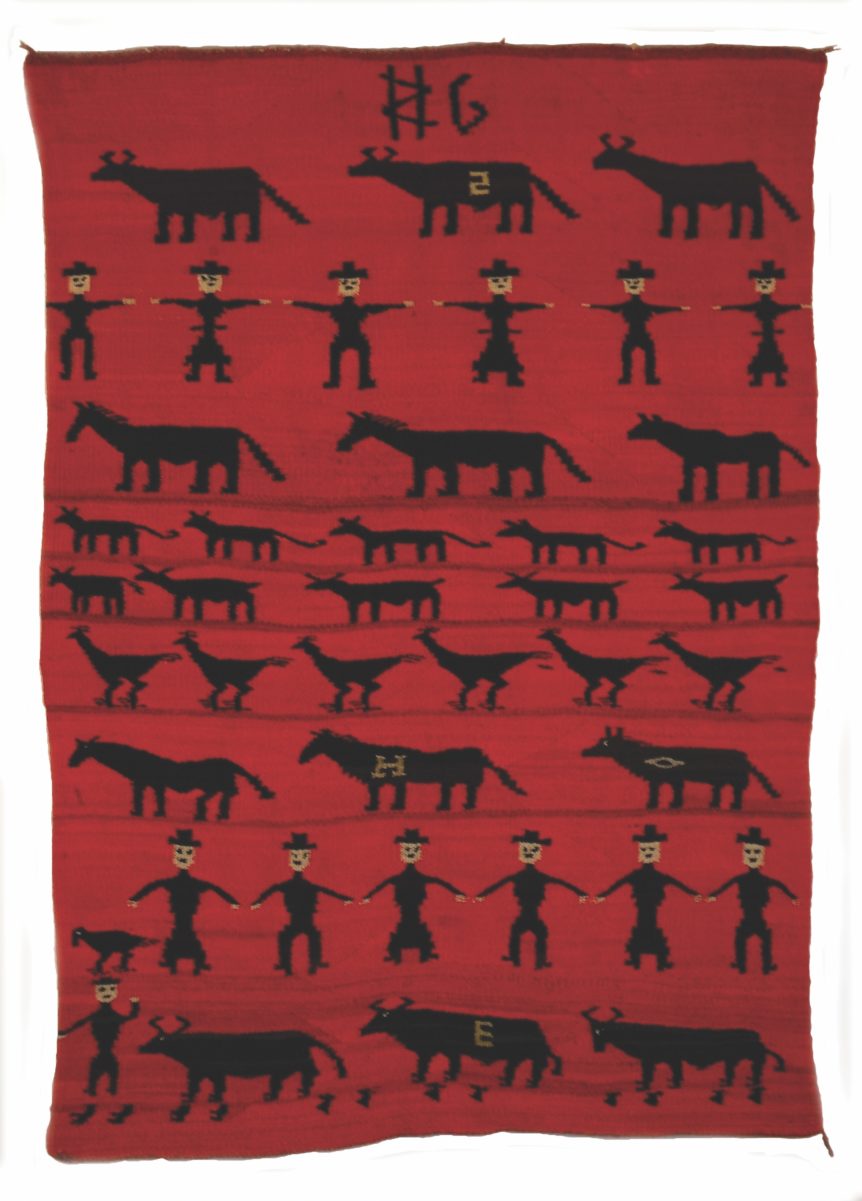 Although the techniques have remained essentially the same over the last three hundred years, the materials, motifs, and format of Navajo weavings changed because of contact with the Pueblo Indians, the Spanish, and, later, American settlers. The earliest Navajo weavings were clothing and blankets featuring simple stripes in a horizontal format adapted from the Pueblo. The natural shades of the wool from the Navajo-Churro sheep provided the colors. As the practice evolved, native plant dyes were introduced, as was indigo for the color blue. Red was achieved by the use of unraveled wool trade cloth, known as bayeta. 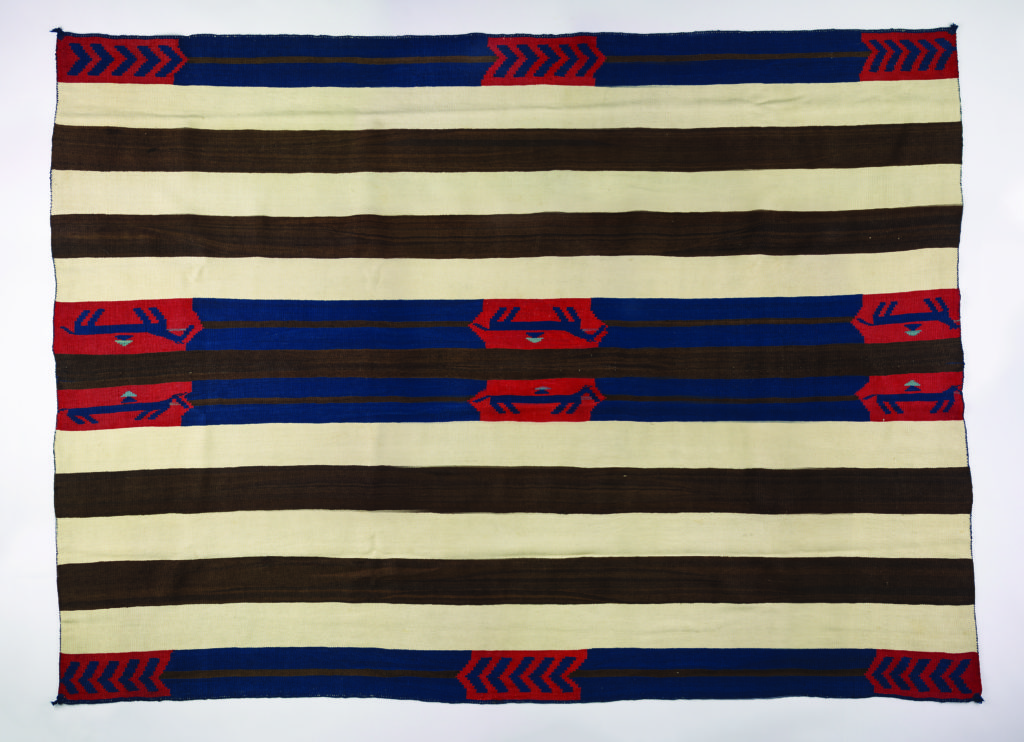 Fig. 2. Pictorial man’s wearing blanket, or chief ’s blanket, Navajo Nation, c. 1855–1865. Native handspun wool, bayeta, and natural dye, 53 by 76 inches. Except as noted, the objects illustrated are from the collection of Rex and Pat Lucke.

The term “chief ’s blanket” for early weavings is thought to have been coined by traders who sought to lend the textiles more cachet when selling them. The chief ’s blanket in Figure 2, which is recognized as the oldest existing pictorial Navajo weaving, is elegant in its simplicity and classic proportions. The blanket is wider than it is long in the traditional format, and is decorated with dark brown, blue, and tan stripes. The anonymous weaver, however, had the freedom to individualize the textile with designs based on personal experiences and outside influences, adding the six stylized horses in the center horizontal bands. The horses are stylistically similar to those found on early Navajo petroglyphs dating to about 1800. 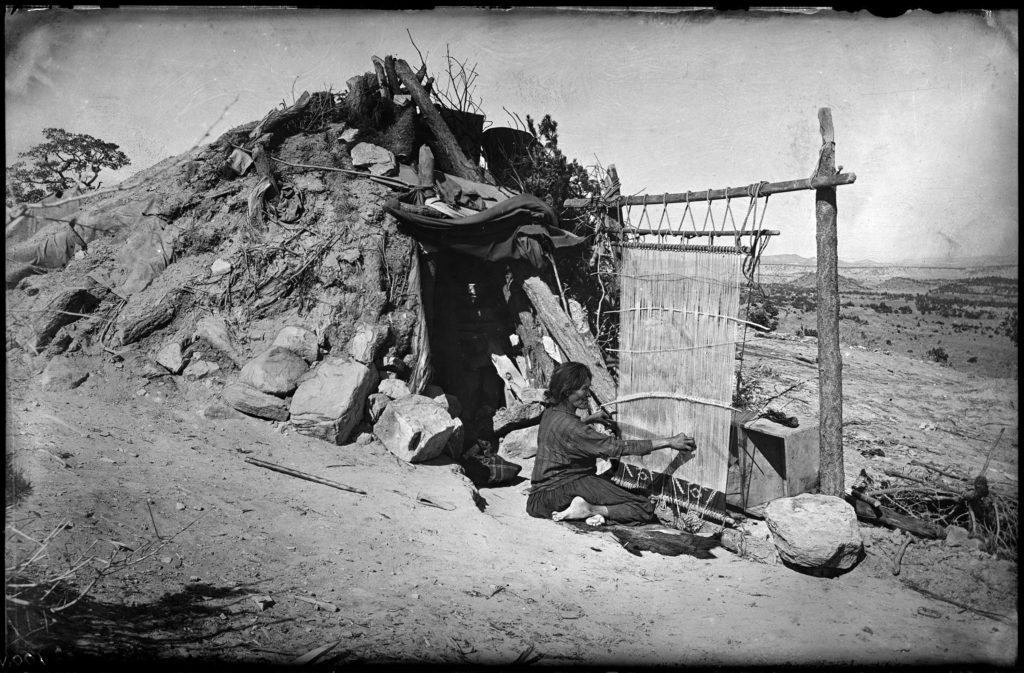 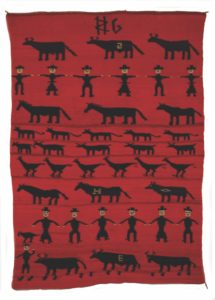 Imaginatively stylized images of horses appear on many weavings, signifying their importance to the Diné. Spanish conquistadors had introduced horses to the Southwest in the sixteenth century. Used for transportation, warfare, and commerce, the horse became a symbol of power and wealth. The Diné’s natural tendency toward adaptation and change is reflected in one weaver’s incorporation of horse imagery in a weaving that also includes long-legged chickens, branded cattle, and friendly cowboys wearing hats, boots, and chaps (Fig. 4).

That weaving dates from the “transitional” period (roughly c. 1880–1895), a time of great change in Navajo textiles. The wearing blanket, for example, evolved to the format of floor rugs and table mats in response to the aesthetics of traders and the Anglo-American market. The shape of the textiles often changed too, from horizontal to vertical. The weaver of the example in Figure 6 altered the traditional horizontal stripes and bands to include figures of long-legged chickens and cows. The introduction of commercial dyes for the eccentrically shaped blocks of color also place this weaving in the transitional period. 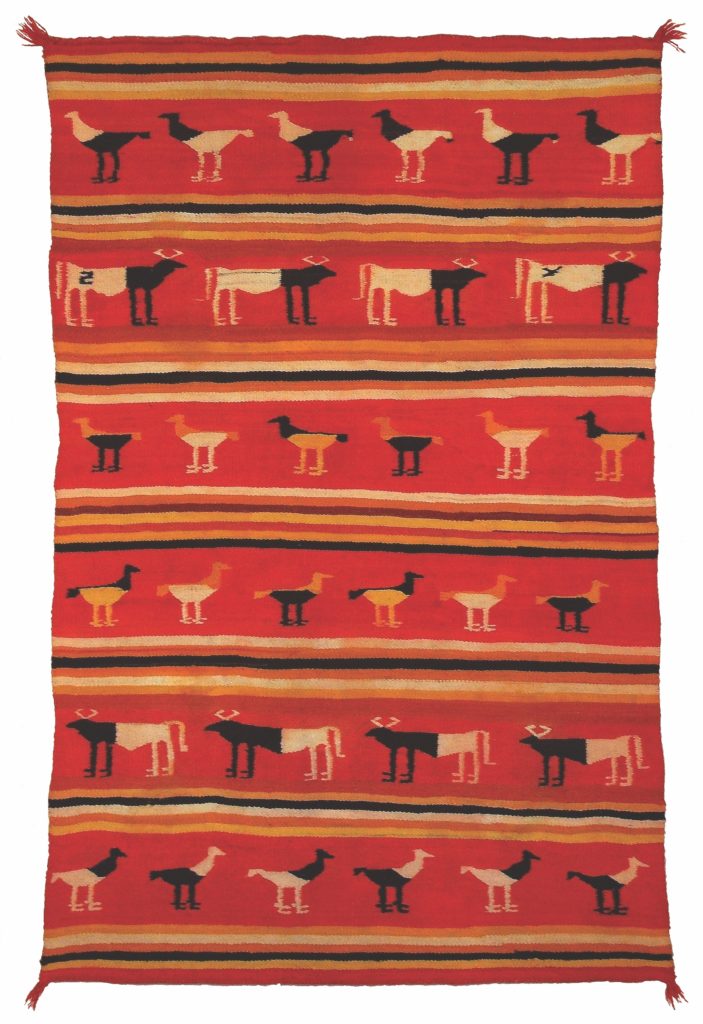 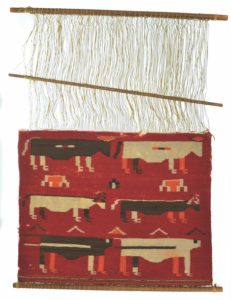 By the 1880s pictorial weavings were being made and sold primarily as souvenirs and household goods through trading posts. Small weavings, called samplers or loom samplers, were especially popular because they were less expensive and easier to transport than larger pieces. The red bayeta yarns used in the background of the woven sampler in Figure 5 point to a date prior to the arrival of the railroad in Navajo Territory.

The completion of the Santa Fe Railroad in the 1880s provided the first real link between the Navajo and the Anglo-American market, and changed the Diné way of life forever. The railroad brought commercial dyes and supplies such as machine-produced wool yarns and cotton string. The high-quality, brightly colored wool yarns imported from Germantown, Pennsylvania, by resident traders between about 1885 and 1915 resulted in numerous remarkable weavings. The rail line also brought new design ideas and made it easier for curious tourists to visit Navajo lands. A popular motif was the train itself, captured in the weaving in Figure 8, for instance, combined with images of wood-framed houses with chimneys. The creative artist humorously modeled some of the houses into train cars by putting them on wheels and attaching them to locomotives. Windows on some are suggested by stylized numbers taken from the trains. 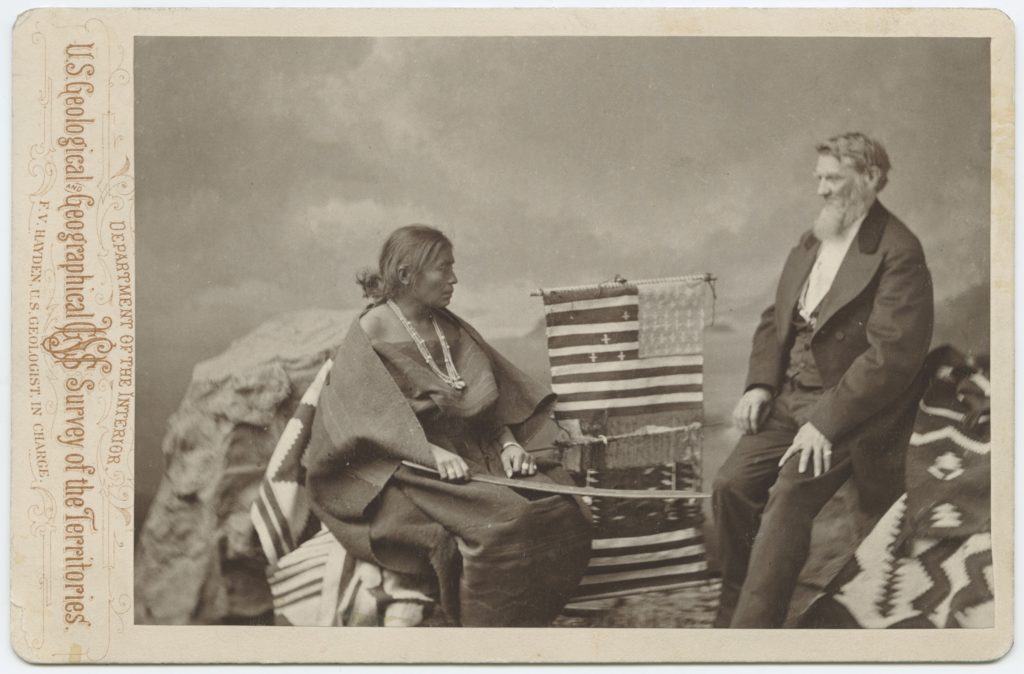 Almost all Navajo pictorial weavings, including those done today, depict objects or scenes that are common on the native lands. One weaver created a colorful depiction of words and an alphabet from a McGuffey’s Reader, first published in 1836, and widely used as textbooks in nineteenth-century schoolhouses (Fig. 10). The weaver may not have been able to read or write English, yet she had a noteworthy ability to reproduce shapes and letters. 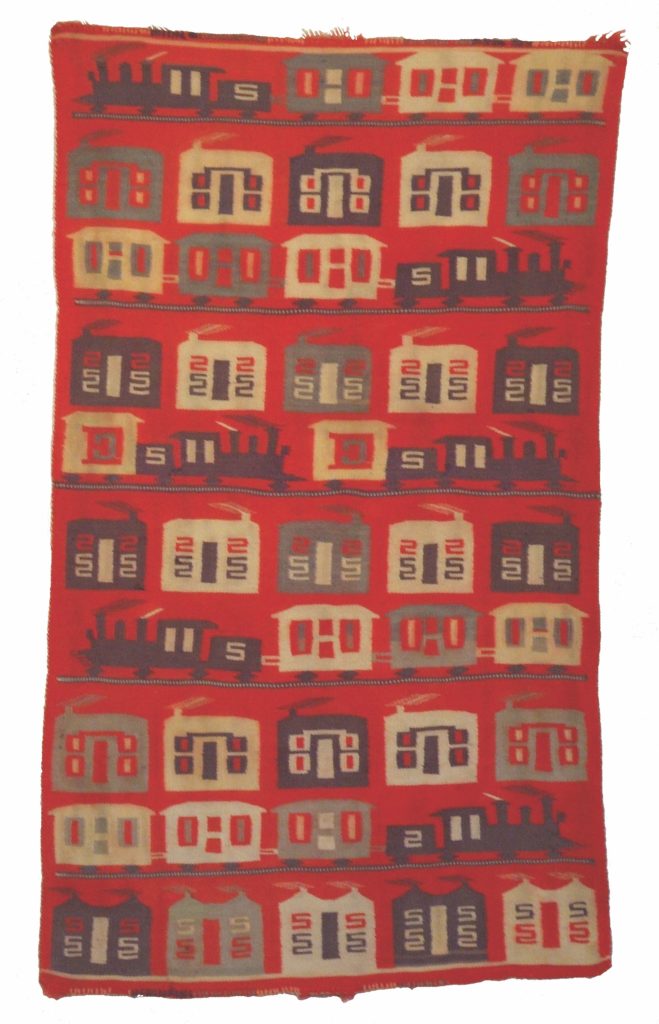 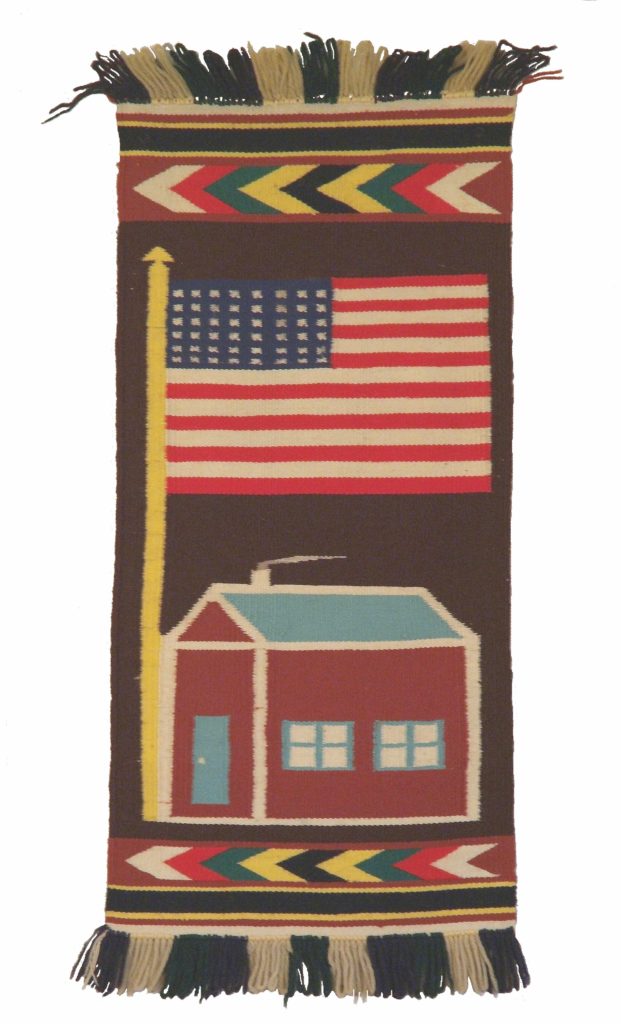 The American flag was a great favorite with customers . . . although the Navajo weaver adapted “Old Glory” to suit her needs, sometimes altering the rectangular shape; varying the red, white, and blue color scheme; changing the number of stars; or substituting the stars with an entirely different motif, such as flowers or anchors. Because flags were displayed on government buildings, both buildings and flags became symbols of power and authority on Navajo land (Fig. 9).

A new exhibition at the Art Museums of Colonial Williamsburg showcases twenty-six Navajo pictorial weavings dating from about 1860 to 1930 that highlight how the highly skilled Navajo weavers adapted and modified their traditional textiles from the world around them to meet the demands of a modern market and trade. With bold designs and brilliant colors, simple everyday objects like trains, livestock, and houses were transformed into works of woven art, and today tell a compelling story of Navajo adaptation, survival, and change. 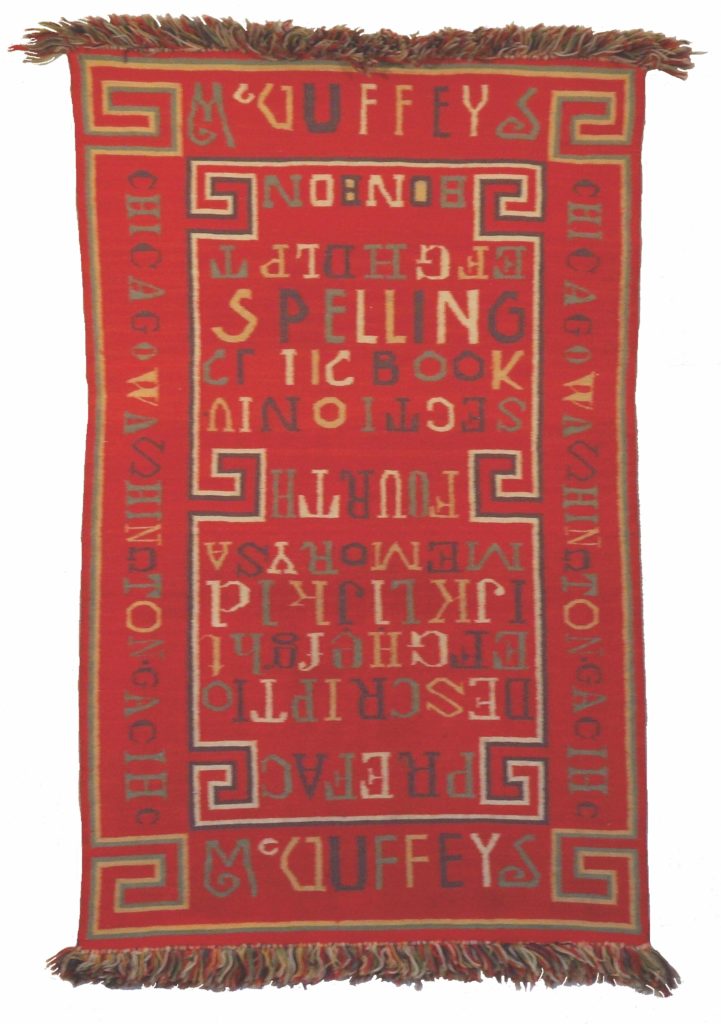 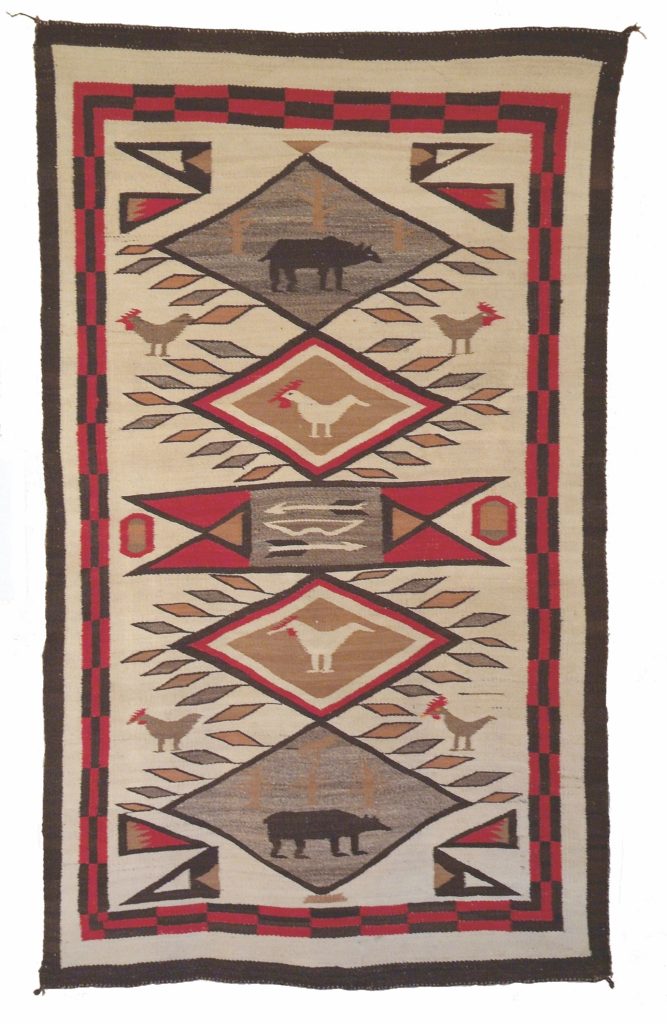 A long-term exhibition entitled Navajo Weavings: Tradition and Trade opens at the Abby Aldrich Rockefeller Folk Art Museum, one of the Art Museums of Colonial Williamsburg in Williamsburg, Virginia, on July 14. The weavings are on loan through the generosity of Rex and Pat Lucke of Nebraska, who have been fascinated by the artistic expressions of Navajo weavers for years.