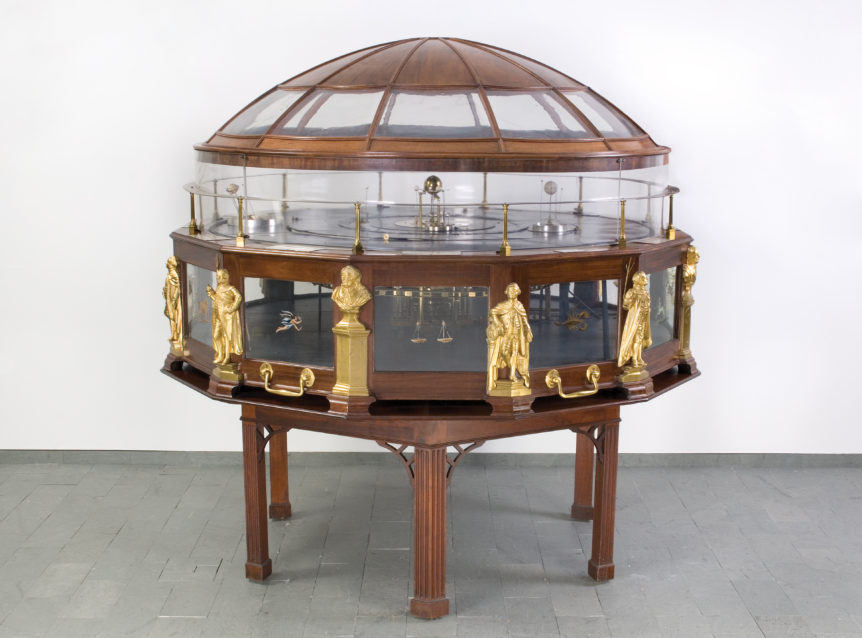 Between 1766 and 1820, the Philosophy Chamber, a grand room adjacent to the Harvard College Library in Cambridge, Massachusetts, was home to an extraordinary collection of works of art, scientific instruments, and natural specimens. Donated to the college by a far-flung network of alumni and supporters and dispatched to Cambridge from points around the globe, this collection stood at the center of artistic and intellectual life at Harvard and in the New England region for more than fifty years.

A forthcoming exhibition originating at the Harvard Art Museums and then traveling to the Hunterian Museum at the University of Glasgow will reassemble a portion of the holdings that shaped the Philosophy Chamber into one of the cultural landmarks of the eighteenth-century Atlantic world. Featuring full-length portraits by Boston’s preeminent painter John Singleton Copley (Fig. 3), plaster casts after the most celebrated Greek and Roman sculptures (Fig. 2), striking natural specimens (Fig. 6), and an array of scientific instruments and demonstration tools (Fig. 5), the show presents a veritable cross-section of eighteenth-century art and material culture.

Housed in Harvard Hall, a brick, Georgian-style building that opened its doors in 1766 (see Fig. 4), the Philosophy Chamber was named for the discipline of natural philosophy, a cornerstone of the eighteenth-century curriculum that wove together astronomy, mathematics, physics, and other sciences that sought to explain natural objects and physical phenomena. Lectures in this subject and in related fields were conducted in the room, and much of the collection was assembled for the purposes of research and teaching. The Philosophy Chamber also served as a boardroom and a convening space for Boston’s elite learned society, the American Academy of Arts and Sciences, and as a picture gallery, where the college displayed the work of contemporary American artists.

While Harvard’s collection endured the turmoil of the Revolutionary War and the upheavals of the early national period, it could not withstand the expansion of the college library. In 1820 as the Philosophy Chamber was refitted with bookshelves, its holdings were dispersed to various university departments and local museums. In 2012, a team of Harvard curators, faculty, and students began researching its holdings in preparation for the upcoming show. Scouring archives, libraries, and museums across the campus and across New England, the team located approximately one hundred instruments, specimens, and works of art from Harvard’s historic repository. These objects, many of which have been hidden away for the past two hundred years, form the core of the forthcoming exhibition and accompanying catalogue.

Frequented by an array of painters, scientists, travelers, and advocates of American independence, the Philosophy Chamber was linked to a network of “teaching cabinets” across the Atlantic world. These cabinets were formed in the midst of the broader Enlightenment effort to build and share knowledge through reasoned inquiry and explication, yet they were anything but open or democratic. Access was limited to a circumscribed group of (largely male) students, scholars, and distinguished visitors. At Harvard, as in other teaching cabinets, the collection was far more diverse than its audience.

The writings of period observers and Harvard officials indicate that the scientific instruments were the most valuable and treasured objects in the Philosophy Chamber. Among the most admired pieces was Joseph Pope’s Grand Orrery, or model of the solar system (Fig. 1). Fashioned of bronze, glass, ivory, brass, and mahogany by the Boston clockmaker Joseph Pope and completed in 1787, the orrery demonstrated the orbits of the six known planets—Mercury, Venus, Earth, Mars, Jupiter, and Saturn—and their satellites. Turning the hand crank set the instrument in motion: the planets rotated on their axes, the moons revolved around the planets, and each planetary system revolved around the sun at relative speed. Singled out for praise in local newspapers and travelers’ letters, the orrery was one of the few instruments of its kind produced in early America, and it was elevated into a symbol of New England and the new nation’s artisanal and intellectual prowess. Reputedly carved by Simeon Skillin and cast by Paul Revere, the brass statuettes that adorn the object encouraged this patriotic reception. Pope placed the likeness of two Americans—Benjamin Franklin and James Bowdoin, the first governor of Massachusetts—alongside a bust of the eminent scientist Isaac Newton.

Not every object in Harvard’s collection was used in the curriculum. In the summer of 1790, the Columbia, the first American ship to circumnavigate the globe, returned to Boston harbor after almost three years at sea. The primary purpose of the Columbia’s voyage had been commercial: following the celebrated travels of Captain James Cook and his French counterpart, the comte de La Pérouse, the ship participated in the fur trade, and ferried Asian goods to Atlantic consumers. At each of the major ports they visited—Nootka Sound in the Pacific Northwest, Hawaii, and Canton (now Guangzhou) in China—the ship’s officers also traded for objects made by indigenous peoples. Soon after their return, the officers dispatched much of this material to the Philosophy Chamber—between 1790 and 1792, college officials acknowledged three large shipments of “rare curiosities.” Ranging from Northwest Coast Indian labrets, or wooden lower lip ornaments, to vibrant mahiole (helmets) (Fig. 7) and ‘ahu’ula (capes) made in Hawaii from tens of thousands of honeycreeper feathers, these artifacts introduced Boston audiences to the cultures of the Pacific and proclaimed the new nation’s maritime prowess.

By the early nineteenth century, Harvard’s art collection had expanded significantly. Though no representations of the room are known to survive, an 1820 inventory of the walls of the Philosophy Chamber conjures a full-fledged picture gallery. Paintings and prints by now-canonical names including Gilbert Stuart and John Trumbull as well as Copley were presented alongside a small collection of European paintings and sculptures. Harvard officials commissioned several of these works, but most were donated by alumni and in some cases by the artists themselves.

Copley was particularly generous. After settling in London in 1775, he dispatched prints after his major paintings to the Philosophy Chamber on an almost annual basis. The artist’s good will may reflect the role that Harvard played in his early career. Between 1764 and 1773 college officials commissioned Copley to paint full-length portraits of three distinguished Harvard benefactors: Thomas Hollis III, Thomas Hancock, and Nicholas Boylston (Fig. 3). Prominently displayed on the Philosophy Chamber’s east wall, these works formed the backdrop against which generations of Harvard students learned basic scientific principles, and almost certainly enticed the artist’s future patrons.

In 1818 Harvard received a truly extraordinary gift from Copley’s son-in-law Gardiner Greene: eleven prints based on the artist’s British paintings (Figs. 9,10). Ranging from classical scenes like Priam Beseeching Achilles for the Body of Hector to religious subjects like Abraham’s Sacrifice, these striking mezzotints and engravings call attention to the breadth and facility of a painter whom Bostonians only knew as a portraitist. In a letter to the Harvard board, Greene expressed his hope that these prints, together “with those [already] in your possession will nearly complete a series of the works which have been published of our late celebrated country man and form a Copley Gallery.” Mounted on canvas and housed in gilded frames, these works arrived in Cambridge on the eve of the Philosophy Chamber’s dispersal, and it is not clear if they were ever exhibited. The dark, velvety blacks of the mezzotints bear no trace of the fading that comes with prolonged exposure. The prints are among a number of new discoveries featured in the exhibition.

Fig. 8. Frontispiece to A New Universal History of Arts and Sciences, Shewing Their Origin, Progress, Theory, Use and Practice, and Exhibiting the Invention, Structure, Improvement, and Uses of the Most Considerable Instruments, Engines and Machines, with Their Nature, Power, and Operation by Benjamin Cole (1695 –1766), after Samuel Wale (c. 1721–1786), 1759. Engraving, 10 ⅜ by 8 7/8 inches (book size). Houghton Library, Harvard University.

A critical exploration of one of the most vibrant rooms and wide-ranging collections in New England, The Philosophy Chamber: Art and Science in Harvard’s Teaching Cabinet promises to add a new chapter to the scholarly understanding of early American art and culture and eighteenth-century Enlightenment. But while this exhibition focuses on a forgotten piece of the past, it also promises to raise questions about the present. The collections of Harvard’s historic repository reflect a range of arguments, debates, and theories about education, the understanding of nature, and the role of the arts that continue to animate academic and political discourse. Where does art intersect with science? What determines a scholarly or scientific fact? What social and political pressures underpin artistic and scholarly production? And finally, and most crucially: how is new knowledge generated, by what methods is it disseminated, and who is it for? These questions, which echoed around the Philosophy Chamber and its collections for more than fifty years, are increasingly urgent today.

The Philosophy Chamber: Art and Science in Harvard’s Teaching Cabinet, 1766 –1820 is on view at the Harvard Art Museums in Cambridge, Massachusetts, from May 19 to December 31, and then travels to the Hunterian at the University of Glasgow, where it will be shown from March 23 to June 24, 2018.

ETHAN W. LASSER is the Theodore E. Stebbins Jr. Curator of American Art and head of the division of European and American art at the Harvard Art Museums. He is the lead curator of The Philosophy Chamber: Art and Science in Harvard’s Teaching Cabinet, 1766–1820, and editor of the accompanying catalogue.