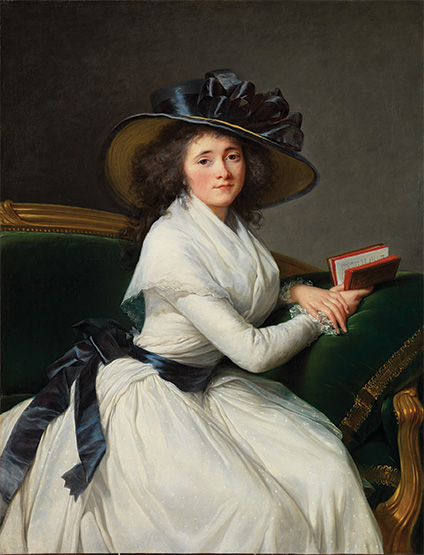 Elisabeth Louise Vigée Le Brun was the most sought-after portraitist of the ancien régime. A retrospective at the Metropolitan Museum of Art rightly calls attention to her extraordinary talent rather than her gender.

Perhaps, in a more perfect world, the gender of Elisabeth Louise Vigée Le Brun wouldn’t matter: we would assess this gifted painter—the subject of a retrospective at the Metropolitan Museum of Art—as we do her eighteenth-century male contemporaries, whose maleness, being assumed, is inconsequential. But from all directions this matter of gender crowds in upon Madame Vigée Le Brun, and although the issues that it raises today are different from those of two centuries past, they are hardly less importunate.

As a woman, Vigée Le Brun was not unique among the artists of the ancien régime. By the time she was accepted, in 1783, as a full member of the Académie royale, she was one of several dozen women who had been so honored, starting in 1663 with the election of Catherine Duchemin. But women were always viewed as something of an oddity in the Académie royale, or at least as something worthy of comment, even when their gifts were as incontrovertible as Vigée Le Brun’s. As an example of what she had to put up with, there were rumors early on “that she does not paint her own pictures, that she does not finish them at least, & that an artist who is in love with her (M. Ménageot) assists her.”1

In fact, painting was the great cause of her life, and the pleasure it brought her is reflected not only in her self-portraits, but also in her depictions of others. “My passion for painting was innate,” she wrote in her Souvenirs, an autobiography published when she was in her late seventies, and it was “to that divine passion that I owe not only my fortune but also my happiness.” Indeed, by the time she died, at the age of eighty-seven, “she had long since become a legend,” according to Joseph Baillio, the curator, together with Katharine Baetjer, of the Met’s exhibition.

If the truth be told, most of the women painters of the Old Master tradition have benefited of late from a certain measure of special pleading. Artemisia Gentileschi, Judith Leyster, and Angelica Kauffman, to name but three of the most renowned, had considerable success in their own day and in ours, but their work only rarely stands up to the best of their male contemporaries. Elisabeth Louise Vigée Le Brun, however, is different. In a century of eminent portraitists—Duplessis, Tocqué, Nattier—she was equal to any of them and she can be admitted into their exalted company without apology or excuses.

Vigée Le Brun was born in Paris in 1755 to Jeanne Maissin, a hairdresser, and Louis Vigée, a pastel painter. It seems a fair conjecture that the central role of motherhood in her work, as well as the love she showered on her daughter, Julie, was a consequence of her own lack of parental affection early in life. As was not uncommon at the time, she was sent away until age five to live with a peasant family in Épernon, and she returned to Paris only to enter a convent school. It was there that she discovered drawing and soon proved so proficient that her father, whom she loved, prophesied that she would become a great painter. But scarcely had she moved back with her parents at the age of eleven, when her father died. Six months later her mother married a rich but miserly jeweler, Jacques-François Le Sèvre, whose relations with Elisabeth were strained, despite a fairly sympathetic portrait of him in the Met exhibition. Largely to escape this unenviable home life, she was married at twenty, in 1776, to Jean-Baptiste-Pierre Le Brun, a painter and critic who would act as her dealer and agent.

From then on, through her talent, the charm of her personality, and, not least, her loveliness, Vigée Le Brun’s ascent was swift and inexorable. Though she had little or no formal training she was mentored by the likes of Joseph Vernet and Jean-Baptiste Greuze until, by her late twenties, she had become the most sought-after portraitist of the ancien régime in the years just before its extinction. So closely was she associated with the Comte d’Artois and with Marie Antoinette herself (who secured her election to the Académie royale) that, when the Revolution came, she was one of the very first to go into exile. For twelve years she traveled around Europe, visiting London, Rome, Vienna, and Saint Petersburg, and leaving in her wake a glowing trail of aristocratic commissions. Frequently her movements were observed by spies of the French government, which, for many and excellent reasons, suspected her of being a counter-revolutionary. Despite the unenviable circumstances of her exile, Vigée Le Brun traveled in style, exploring the great princely collections of Europe, winning election to a number of the local academies, and apparently enjoying herself to such an extent that, even after she was allowed back into France, she seemed in no hurry to return. When finally she did so, in her late forties, she felt somewhat estranged not only from her native country but also from the age that was then dawning. “I am not of this century,” she would confide, in old age, to a friend.2

The tumultuous vicissitudes of her life are reflected in the ninety paintings, drawings, and pastels on view in the Metropolitan’s exhibition, which began at the Grand Palais in Paris and will end its run at the National Gallery of Canada in Ottawa. These are overwhelmingly portraits, especially of the official beauties of the day, but there are a few mythological scenes and one landscape. In all, it is a rewarding retrospective of the artist, but hardly a definitive one: among other notable gaps, the two great self-portraits from the Louvre, of Vigée Le Brun with her daughter, are missing (Figs. 7, 8). It must also be said that some of the later portraits, painted in exile or after her return, fall short of that definitive excellence of the artist in her prime. One suspects that she was so much a creature of the ancien régime that her later works, however admirable, lacked something of the elusive alchemy that marked the years before she went into exile.

If there is one quality that emerges from her art, beyond its formal excellence, it is a hum of happiness that runs like the subtlest bass note through her compositions. In both her autobiography and  her self-portraits, Vigée Le Brun comes across as a strikingly happy human being. This happiness, though hardly unalloyed in her, was the defining element of her art. According to the unwritten protocols of eighteenth-century French portraiture, women were allowed to appear happy, while men tended (notwithstanding the odd self-portraits of Jean Étienne Liotard and Maurice-Quentin de La Tour) to favor an august and statuesque sullenness. In the works of Vigée Le Brun, by contrast, happiness is pervasive. There is a verve, an élan, to them that distinguishes these portraits from most of the portraiture of her contemporaries. Madame Dugazon in the Role of “Nina” looks genuinely and pleasantly surprised. Even in a portrait d’apparat, or official portrait, like that of Charles-Alexandre de Calonne (Fig. 2), the sitter seems as affable and approachable as a controller general of finances is ever likely to be.

Allied to this spiritedness is the intuitive rightness of Vigée Le Brun’s compositions as well as a highly distinctive, but also authoritative, use of color, especially in the years before she fled into exile. How prepossessingly does the Baroness de Crussol Florensac turn from her music to reveal a fur-lined red casaquin jacket that conquers the entire composition, aided by the black velvet of her collar and hat, as it curves sinuously away (Fig. 5). Or the Comtesse de la Châtre, whose equally all-conquering white muslin dress, relieved only by the blue silk of her sash and the billowing bows of her straw hat, anticipates the chromatic experiments of Whistler a century later.

As has been suggested, it is regrettable that Vigée Le Brun’s two finest works, the self-portraits with her daughter Julie from 1786 and 1789, both in the Louvre, were not included in the exhibition. These are, or should be, icons of maternity itself. And the composition of the earlier one (also titled Maternal Tenderness; Fig. 7) is as perfect in its way as that of Raphael’s Madonna della Sedia.

It is an oddity of Vigée Le Brun’s reputation in recent years that she has been attacked by certain feminists for being insufficiently active in the feminist cause. It was presumably with these two paintings in mind that Simone de Beauvoir stated, in The Second Sex, that “instead of giving herself generously to a work she undertakes, a woman too often considers it simply as an adornment of her life.…Moreover, it is her own self that is the principal—sometimes the unique—subject of interest to her: Mme Vigée-Lebrun never wearied of putting her smiling maternity on her canvases.”3 Smiling maternity! How condescending and obtuse!

Most depictions of maternity—into the last century—were the work of men. And yet, here we see two supreme representations of it by an actual mother. It may or may not be that the pyramidal composition of the 1789 self-portrait with Julie was inspired by earlier depictions of the Madonna and Child. But here, for once, it is almost as if the Madonna, forswearing the ministrations of Saint Luke and taking up the brush herself, rises before us, flush with the beatitude of maternity. Seen in such a light, this work is without parallel in any earlier Western painting.

Vigée Le Brun: Woman Artist in Revolutionary France is on view at the Metropolitan Museum of Art until May 15.