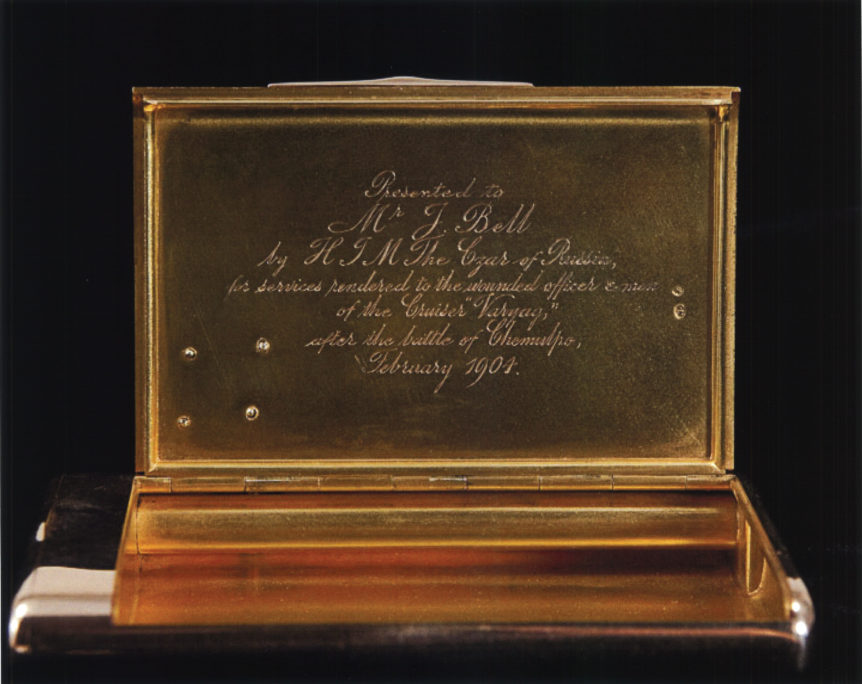 The Battle of Chemulpo Bay was fought in the waters off Korea more than one hundred years ago at the start of the Russo-Japanese war. A small historical ripple from this now obscure naval engagement recently reached Texas.

Fig. 1. The Fabergé imperial presentation cigarette case shown open, revealing the inscription to John Bell. According to Fabergé scholar Ulla Tillander Godenhielm, the engraving inside the lid of presentation cases was most often done after the recipients were presented with the award. In Russia, recipients of imperial gifts were given the option to turn them in for the equivalent value in money. Hence, the later engravings. McFerrin Foundation Collection, Houston.

The McFerrin Collection—housed in the Houston Museum of Natural Science and built over the past sixteen years by Dorothy and Artie McFerrin—features the largest private holdings in the United States of objects by the Russian jewelry firm Fabergé. The company was based in St. Petersburg, with branches in Moscow, Odessa, Kiev, and London. In 1885 Carl Fabergé (1846–1920) was appointed purveyor to the imperial court of Russia, and appraiser of the court in 1890.1 The business thrived until it was closed soon after the Bolshevik revolution of 1917. While researching Fabergé smoking accessories in the McFerrin Collection, I came across a presentation piece commissioned by Czar Nicholas II: a simple burnished gold cigarette case with a diamond-studded Russian imperial eagle appliqué on the front and a cabochon sapphire thumbpiece. The case had an intriguing inscription: Presented to Mr. J. Bell by H I M The Czar of Russia, for services rendered to the wounded officer & men of the Cruiser “Varyag,” after the battle of Chemulpo, February 1904.2 At the time, I was unfamiliar with the Battle of Chemulpo Bay, but even more I wondered: Who was Mr. J. Bell?

Fig. 2. The same Fabergé imperial presentation cigarette case as in Fig. 1. It was made by workmaster Gabriel Nykänen in 14-karat gold, with a diamond-set imperial eagle and cabochon sapphire. Simple Fabergé gold cigarette cases like this were stamped out of a mold, then embellished with decorative elements such as gems and imperial eagles. McFerrin Foundation Collection.

The empires of Russia and Japan went to war from 1904 to 1905 over territories both nations desired to control in Manchuria and Korea. Chemulpo Bay, where the battle took place, is the main port—now known as Inchon—for the Korean capital of Seoul. On February 9, 1904, the Varyag (meaning “Viking”; also spelled Variag), with a crew of 562 men under the command of Captain Vsevolod Rudnev, steamed out of the harbor, along with the Russian gunboat Korietz, carrying 160 men. The two ships exchanged fire with six Japanese cruisers and multiple torpedo boats. Heavily damaged, the Varyag and Korietz then limped back into port, where they were scuttled. Efforts to rescue the Russian sailors were undertaken by British ships and other vessels anchored nearby.3 To show his gratitude to those who were instrumental in saving his subjects, Nicholas II commissioned items from Fabergé.

The inscription on the Bell cigarette case implies the recipient was a medical practitioner who cared for the Russian wounded. I consulted the 1905 Standard Life Office Directory and Chronicle of China, a compendium of foreign residents living in Asia that year, published by an Edinburgh insurance company. The book lists five “J. Bells,” and one stood out: “J. Bell, superintendent, Government Civil Hospital, Hong Kong.” 4 This was compelling evidence that he could be the “J. Bell” honored with a Fabergé cigarette case.

Fig. 3. This silver Fabergé kovsh was presented to the wardroom of HMS Talbot in 1904. The kovsh was a traditional Russian drinking vessel or ladle whose form has been traced to the tenth century. By the seventeenth century, it had become a more decorative or ceremonial than practical item. The figure on this example represents a bogatyr—a Russian knight of yore. Courtesy of Trustees of the Royal Navy Trophy Fund, Portsmouth, England.

But how would Russian sailors, wounded in a battle in Korea, end up in a British hospital in Hong Kong? The answer was suggested by an object in the trophy collection of the Royal Navy in Portsmouth, England: a prodigious kovsh, a traditional Russian ceremonial drinking vessel, made in Fabergé’s Moscow silver workshop, which specialized in large silver pieces. It bears the inscription: Presented by the Emperor of Russia to the Wardroom of HMS Talbot in friendly recognition of the assistance rendered to the crews of the ‘Variag’ and the ‘Korietz’ after the Battle of Tchemulpo. February 1904.5 The HMS Talbot was anchored in Chemulpo Bay, along with warships from other neutral countries—France, Italy, and the United States— to observe the battle.6 These ships picked up sailors from the sinking Russian vessels and transported them out of harm’s way, and the Talbot took wounded Russians for medical attention to the nearest British port, Hong Kong.

Fig. 4. Photograph of the Russian cruiser Varyag, c. 1900. Built in Philadelphia and launched on October 31, 1899, the Varyag had a colorful multinational history. Scuttled following the Battle of Chemulpo Bay in 1904, the ship was raised by the Japanese and put into their naval fleet. In 1916 the Russian navy repurchased the vessel. It was in Liverpool for an overhaul when the October Revolution took place in 1917, and the British seized the ship, which was later sold for scrap to a German firm. Author’s collection.

With this new information, the possibility that “Mr. J. Bell” was Dr. John Bell became stronger. Confirmation of my theory was found in the April 8, 1905, edition of the British Medical Journal. On page 780, under “Medical News,” is a paragraph that reads: “The wounded officer and men of the Russian warship Varyag, which was sunk by the Japanese at Chemulpo in the first stages of the war, had the benefit subsequently of the professional care and attention of Dr. Atkinson, Principal Civil Medical Officer, and Dr. J. Bell, Superintendent of the Government Civil Hospital. The Czar recently sent for each of the gentlemen a cigarette case of solid gold, with the Imperial coat of arms set in diamonds. These souvenirs were presented to Drs. Atkinson and Bell recently by the Governor of Hong Kong“.7

A few days later, on April 12, 1905, The London Medical Press announced: “The Czar has sent gold cigarette cases to the Hon. Dr. J. M. Atkinson, principal civil medical officer, and Dr. J. Bell, superintendent of the Government Civil Hospital, Hong Kong, in recognition of the services rendered by them to the wounded officers [sic] and sailors of the Russian cruiser Variag interned for a time in the British Colony“.8 According to the Biographical Dictionary of Medical Practitioners in Hong Kong, Dr. Bell retired in December of 1914.9

Fig. 5. This Fabergé imperial presentation cigarette case, also by workmaster Nykänen, was given to Captain H. E. Batt in 1905. Made in 14-karat gold, with a diamond-set imperial eagle and a cabochon sapphire thumbpiece, it has sunburst reeding that exemplifies the variety of goldwork patterns used by Fabergé. Sotheby’s New York.

His cigarette case was auctioned at least three times—in 1967, 1983, and 1984—before the McFerrins purchased it from an antiques dealer.10 Another Fabergé imperial presentation cigarette case associated with the Battle of Chemulpo Bay went to auction in 2000—a reeded sunray design, also of gold and with a diamond-set imperial eagle. According to the auction catalogue, the case was presented to Captain Henry Ellis Batt (1850–1923) on April 25, 1905, by the mayor of Exeter on behalf of Nicholas II. Batt was commander of the Liverpool-based steamship Ajax, which also assisted the wounded of the Varyag. Further details have yet to be found.11

The two known cigarette cases, and most likely the J. M. Atkinson case, were made by the St. Petersburg Fabergé workmaster, Gabriel Nykänen (active 1889–1917), who owned his own independent shop and filled commissions for Fabergé.12 He appears to be one of Fabergé’s go-to men for imperial presentation cases. The court made a great many orders for such gifts. According to the memoirs of a Fabergé journeyman engraver, Jalmari Haikonen, published in Golden Years of Fabergé by Ulla Tillander-Godenhielm, ten men produced a steady stream of nothing but cigarette cases, and up to forty cases at a time would be waiting in line for the engravers.13 The heroic deeds of the recipients of these imperial awards will forever be immortalized in the art of Fabergé.