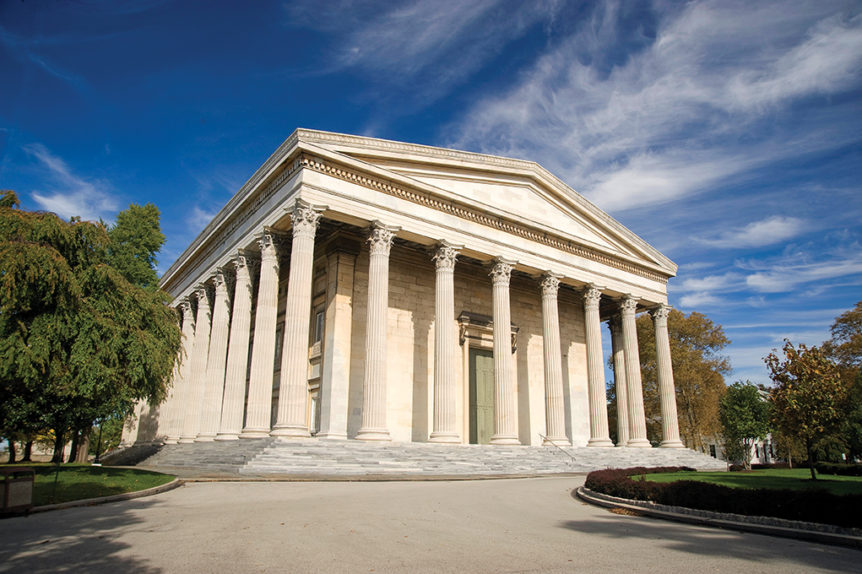 This is not a walk on the wild side, though it will take you to three Philadelphia sites much less visited than Elfreth’s Alley, the Liberty Bell, or Rittenhouse Square. If I find them more intriguing than those picturesque spots it is simply because this is where the city’s history lives on in some interesting twenty-first-century ways. The neighborhood, called either Spring Garden or Fairmount/Art Museum, is close enough to the Philadelphia Museum of Art for the walk to begin at the museum’s Perelman Building. (You can also start at the Barnes Foundation on Benjamin Franklin Parkway and walk north, though that will take somewhat longer.)

The first destination is 2027 Fairmount Avenue, but go down Green Street rather than Fairmount so you can enjoy the curious domestic architecture on its 2200 block, especially the corner lot on Twenty-Second Street where the Bergdoll Mansion has stood since 1886, rivaling the Gilded Age mansions on New York’s Fifth Avenue with its frescoes, mosaics, and gold-plated everything. It was built by the notable Philadelphia architect James H. Windrim for Louis Bergdoll, whose City Park Brewery produced a very popular lager.

Grover Cleveland Bergdoll (1893–1966), grandson of Louis, distinguished himself as a playboy, aviator, and notorious draft dodger in World War I. The quarry of kidnappers and bounty hunters, he lived on the run while his family stayed put. By the 1970s the building had been divided into apartments though its rooms kept their opulent decor, maintained by two elderly gents—said to be proud Bergdoll descendants—who also cut the grass with a push mower after dark.

On the other side of the street, next to the Convent of Divine Love where the Holy Spirit Adoration Sisters are cloistered, a massive brownstone with a turret looms over the street. (Although it plays its part convincingly, the turret actually belongs to the ghastly permastone building next door.) This brownstone, too, has some notoriety as the recent dwelling of another local figure, Vince Fumo, a former state senator who went to prison in 2009 on federal corruption charges—not an unfamiliar Philadelphia story.

Fig. 5. 2220 Green Street has been the home of Vince Fumo, a former state senator who went to prison in 2009 on federal corruption charges. Weinik photograph.

Had he been arrested many decades earlier, Fumo would have done his time a few blocks north on Fairmount Avenue at Eastern State Penitentiary, the mighty fortress that is now a museum where contemporary art meets the history of incarceration.

As you take the audio tour narrated by Steve Buscemi, it is hard to believe that when it opened in 1829, Eastern State was considered a humane and enlightened solution to crime and criminals. Isolated from one another in cells (a novelty at the time), forbidden to speak, receive visitors, or have books or letters, and hooded when moved from place to place, prisoners were meant to contemplate their souls as they stared silently at the tiny oculus of light at the top of their chambers. Regret and penitence would follow, or so the Quakerish theory went. Yes, the inmates had heat, water, and flush toilets—which were almost unheard of at the time—and these luxuries may have been partly responsible for persuading so many observers, Alexis de Tocqueville among them, to buy into Eastern State’s theory of reform. Charles Dickens, a visitor who actually knew something about prisons and a great deal about the human soul, did not: “nothing wholesome or good has ever had its growth in such unnatural solitude.”

Dickens was undoubtedly right, but Eastern State rolled on into the twentieth century, closing finally in 1971. By that time it no longer resembled anything like the enforced monastery of its origins. Eventually, in 1994, the Pennsylvania Prison Society took it over, and in the decades since it has found its way to becoming what it is now—again a place for serious reflection, but also a call to action directed at one of the most important issues of the day, mass incarceration. The temporary artist installations, many of them in the former cells, play a significant role in this mission.

Dark, dank, but paradoxically enlightening, much about Eastern State will creep you out. A stop at its excellent gift shop may lighten the mood.

Eastern State is open every day from 10 a.m. to 5 p.m. except Thanksgiving, Christmas Eve, Christmas Day, and New Year’s Day.

Corinthian Avenue runs along the eastern edge of Eastern State, leading to one of this country’s finest examples of Greek revival architecture, the Founder’s Hall of Girard College, which opened in 1847. The architect was Thomas Ustick Walter who designed several notable buildings in the city as well as the dome of the United States Capitol. The founder was the immigrant tycoon Stephen Girard (1750–1831), who bequeathed money for the school in his will, stipulating that Girard College be nondenominational and run for the benefit of orphaned or fatherless white boys. (African-American boys would have to wait until 1968 to be admitted and girls, until the 1980s.) Some three hundred students from grades one through twelve now board at the school five days a week, though their classrooms no longer occupy Founder’s Hall, which houses Girard’s collections and is used for concerts and other events. Girard College has fulfilled Stephen Girard’s vision and gone beyond it in improving lives and broadening opportunities for disadvantaged students of all races and both sexes.

Fig. 8. This view of one of the museum rooms in Founder’s Hall includes a mahogany table with marble mosaic top by Ephraim Haines (1775–1837), 1807, as well as a French marble and ormolu clock, c. 1790. Photograph by Graydon Wood, courtesy the Philadelphia Museum of Art.

On that same visit to Philadelphia, Dickens glimpsed Founder’s Hall when it was under construction and declared that it would be “the richest edifice of modern times.” I saw it with Alexandra Kirtley, Montgomery-Garvan Curator of American Decorative Arts at the Philadelphia Museum, and Katherine Haas, director of Historical Resources at Founder’s Hall, who took me through the collections of Stephen Girard, said to be the richest man in America at the time of his death. He is also, to me, one of the most fascinating and least studied—though both of my guides were well up on the details of his life. An uneducated boy who was blind in one eye, Girard had left France at age fourteen and gone to sea, eventually making his first fortune in shipping. Ventures in banking, railroads, real estate, and insurance followed.

Fig. 9. The geometric stairwell of Founder’s Hall, looking directly up toward the ceiling from the first floor. Girard College photograph.

The furniture and decorative arts in Founder’s Hall tell some of his story and, because he kept such meticulous records, his pieces, especially a set of ebony chairs made by Ephraim Haines, have become important sources for documenting other Philadelphia furniture. These chairs, described by Kirtley as “subtle statements of wealth” for the rarity of their wood, underscore Girard’s unusual combination of high-end taste and disdain for elitism. He was, Haas points out, no Philadelphia gentleman, preferring to live with his fine furnishings down on unfashionable Water Street, where he could be near the docks and his ships.

Living on Water Street in 1793 put Girard at the center of the Yellow Fever epidemic. Elsewhere in the city anyone who could flee did so. Washington, Jefferson, and Hamilton all left. Girard stayed, taking charge of the impromptu Bush Hill hospital, where amidst horrifying conditions he tended the sick and reorganized the conditions of their care. This was only one among many of his philanthropic efforts on behalf of the poor, including, Kirtley points out, demolishing the Cadwalader mansion in Society Hill to erect tenement housing.

The galleries containing Girard’s clocks, specimen table, musical desk, and other fine objects lead directly to those displaying the memorabilia of the school’s nearly 170-year history, including the jacket of the first African-American boy to graduate from there. It is a seamless transition for both curator and visitor, and one appropriate to the founder’s unusual legacy.

Fig. 11. Inside the front door of Founder’s Hall rests the sarcophagus of Stephen Girard, designed by Frederic Graff Jr. (1817–1890) and produced by Philadelphia stonecutters J. &M. Baird, and one of two life-size statues of him by Nicholas Gevelot (c. 1800–1873). Girard College photograph.

Founder’s Hall at Girard College is open to the public for tours on Thursdays and by appointment.

Retracing your steps along Corinthian and crossing Fairmount Avenue will bring you after a few blocks to Mount Vernon Street. The Thomas Eakins House at 1729 Mount Vernon occupies a spot on a block that is solidly middle class, just as it was in 1854 when the artist’s father, Benjamin, brought his family there. Only the plaque denoting a landmark building and the fourth story, added by Benjamin for Thomas’s studio, distinguish the exterior from that of its neighbors.

The interior is quite another story. If Thomas Eakins is your favorite nineteenth-century American artist as he is mine, prepare yourself. He lived here until his death in 1916 and his will stipulated that the house remain a place for artistic pursuits. And so it has—though once you pass through the tiny vestibule with its original plasterwork you are in for an attitude adjustment. Number 1729 is now the home of Mural Arts Philadelphia, and the large-scale up-to-the minute works on display, the rooms retrofitted into galleries, offices, and labs, and the bustle of students, administrators, and others do not bring anything about Thomas Eakins to mind. But once you take in the spirit of Mural Arts you will probably say to yourself: so what? For here is the epicenter of Philadelphia’s rich tradition of public art, those bold and engaging works you see all over the city executed in a variety of styles and addressing a variety of subjects—from mental health to bullying to a celebration of the city’s musical heritage—made by established artists as well as students, who come from all over to do this work.

Mural Arts began in the 1980s as an anti-graffiti project initiated by the city and run by Jane Golden, who has made it a national model for public art. The program moved into the city-owned Eakins house in 2001 and annexed the property next door in 2007. The organization works with communities, afterschool programs, hospitals, and prisons. Its reach is impressive. In the fall, Ai Weiwei, Hans Haake, and twenty other artists will create temporary installations in a nine-week city-wide public art and history project, sponsored by Mural Arts.

The “artworks” section of the website muralarts.org will point you to a selection of murals organized by neighborhood, but look around as you pass through the city, for there are many more, all emanating from this row house on Mount Vernon where Thomas Eakins once lived and worked. Nor has he been forgotten. “We love being in the home of a creator,” Amy Johnston, the program’s executive assistant, tells me before sending over an image of the Eakins house in a mural that pays homage to him. I am persuaded, and even more so when I consider the murals beneath the Girard Avenue bridge that bring to mind in their appealing and gaudy way the great Eakins canvas, Max Schmitt in a Single Scull.

Mural Arts Philadelphia is open Monday through Friday, 9 a.m. to 5 p.m. and by appointment.