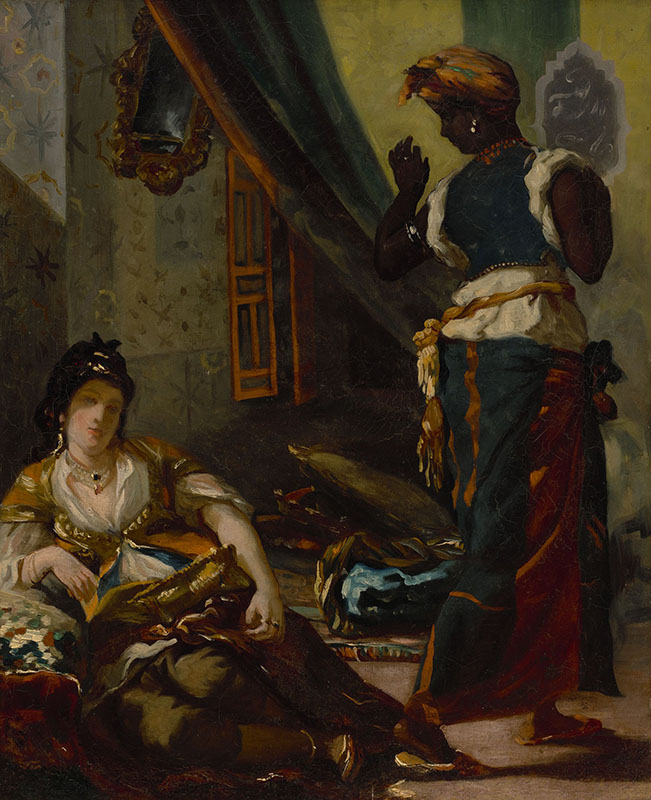 Today, the Museum of Fine Arts, Houston unveiled its latest acquisition: a newly rediscovered smaller and earlier version of Eugène Delacroix’s masterpiece Women of Algiers in Their Apartment. Painted in 1833–1834, the work in the Houston collection is likely a cabinet picture—a small, but highly finished study that would be kept in a display case—that Delacroix, the leading figure in French romanticism, made before completing the full-size version, now in the Louvre, in 1834.

The earlier Women followed an interesting road to Houston.  The museum purchased the eighteen-inch-tall painting—for an undisclosed sum—from Paris dealer Philippe Mendes, who had been approached by the painting’s owner in 2018. That person, a Parisian woman who has chosen to remain anonymous, had seen the larger version of Women at the Louvre, and felt it bore a resemblance to a painting she and her father had purchased ten years earlier. “I took a look at the painting, which was dirty and with a very thick yellow varnish, but I felt it had Delacroix’s very particular style,” Mendes told the Associated Press. “So I said, let’s clean the painting and let’s see what comes out of it.”

Cleaning revealed Delacroix’s characteristic rich color palette, and through further research Mendes learned that this version of Women had once been owned by Count Charles-Edgar de Mornay. In 1832, the count led a French diplomatic mission to North Africa, and Delacroix, then age 32, accompanied him on the six-month journey. The story goes that an official in Algiers invited the artist into his home, where he saw the women of the house in their private sanctuary, the scene he later captured on canvas. De Mornay sold the painting at auction in 1850, and it disappeared from public view.

The final steps in the work’s authentication were undertaken by leading Delacroix scholar Virginie Cauchi-Fatiga, who compared it to other paintings by the artist and examined it under infrared light and with x-ray images. Her verdict: genuine without a doubt. Art authentication is a fascinating, painstaking process, and one that our Curious Objects podcast recently explored in an episode about the rediscovery of a lost Caravaggio. Give it a listen here.