Silence, stillness, and darkness in the paintings of the Danish artist Vilhelm Hammershøi

In one of his most famous works, the esteemed art historian Sir Nikolaus Pevsner sought to define “The Englishness of English Art.” If anyone were to under take a comparable inquiry into the Danishness of Danish art, the painter Vilhelm Hammershøi could well stand as the palmary embodiment of the thing in question. His small, reticent, manically controlled paintings achieve that prim order, that almost morbid inwardness, that foreigners, at least, are apt to associate with the land of Hamlet and Kierkegaard. 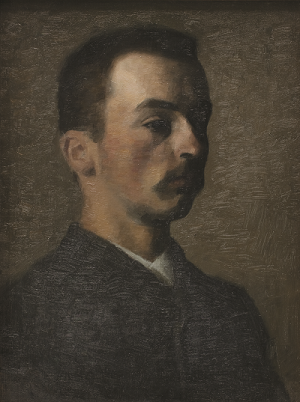 Long overlooked outside of his homeland, where his self-portrait even graces a postage stamp, Hammershøi has seen his international reputation grow ever since Kirk Varnedoe’s seminal Northern Lights: Realism and Symbolism in Scandinavian Painting opened at the Corcoran  Gallery in 1982. That was the show that finally put Hammershøi on the international map. And now, more than thirty years later, a new exhibition at New York’s Scandinavia House reaffirms the subtle charms of Hammershøi that were so splendidly in evidence in that earlier exhibition. 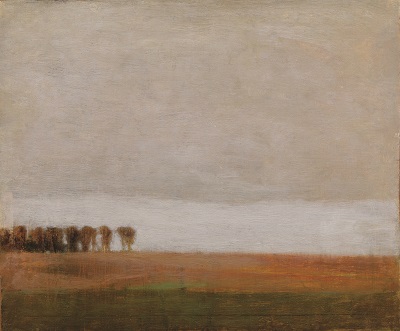 Hammershøi’s art is defined, if not overwhelmed by a sense of stillness and silence. Nothing happens in his paintings, and his life would seem to have been every bit as uneventful as his art. Although he traveled widely in Europe, he does not appear to have learned much on his travels, beyond discovering Whistler in London. At an early age he married Ida Ilsted and he remained with her contentedly for the rest of his life.

Everything we know about him suggests that his radically introspective art reflected his character. After an initial visit to his studio, Rainer Maria Rilke wrote that he intended to go see the artist again, “but without speaking with him since he speaks only Danish and understands no German. One has the feeling that all he does is paint, that that is all he can do or wants to do.” 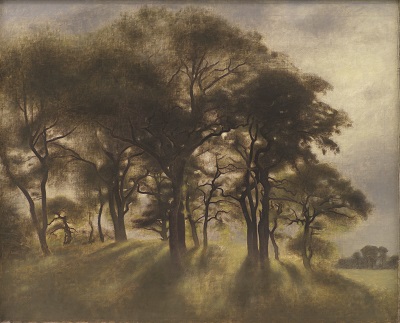 Over the four decades of his career, Hammershøi turned his hand to several of the available genres of painting and, at the very least, he acquitted himself in all of them. In addition to a fine female nude, the exhibition at Scandinavia House includes his Portrait of Ida Ilsted from 1890, an exquisite character study of the timid young woman whom he would soon marry (Fig. 4). Emerging from the pale background in a feathered hat and overskirt, she is a repressed étude in black and gray and grayish green. Her almost palpable resistance to the viewer’s gaze is even more emphatic in Woman Seen from the Back from 1888, where the sitter literally turns her back on us, as though deflecting any intimacy or connection (Fig. 5). The exhibition also includes landscapes, such as View of Jægersborg, Alle. Gentofte, North of Copenhagen from 1892 (Fig. 2) and Near Fornunen, Jægersborg Deer Park, North of Copenhagen from almost a decade later (Fig. 3). 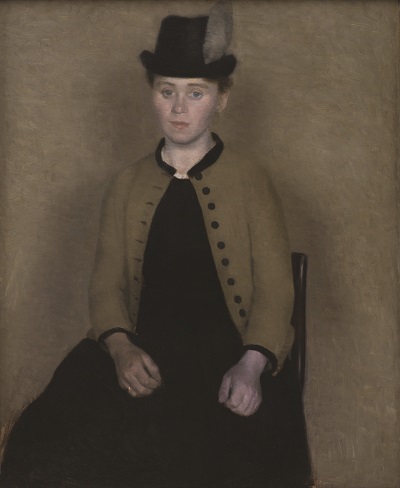 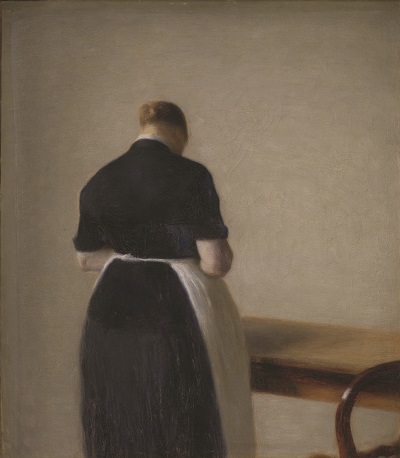 But it is Hammershøi’s interior scenes, surely, and to a slightly lesser degree his cityscapes, that represent his finest and most enduring achievement. In these works he shows himself to be a symbolist of the realist variety. Notwithstanding a few early and unimportant exceptions, he does not traffic in the vaporous mythologies of symbolists such as Pierre Puvis de Chavannes, but rather in depictions of modern life refracted through his highly refined if decidedly depressive temperament. 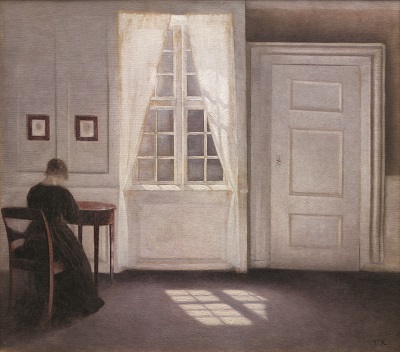 The template for these interiors comes ultimately from the school of Delft and the works of Johannes Vermeer and Pieter de Hooch, with their exquisitely calibrated order and balance. Hammershøi was hardly alone among his contemporaries in depicting interiors in this way: one thinks of his fellow Dane Carl Holsøe, of the Belgian Xavier Mellery, and the American Walter Gay. But none of these painters equaled him in artistic discernment or in the degree of his darkness or inwardness. Some of Hammershøi’s interiors are populated by a single figure seen in daylight: Interior in Strandgade, Sunlight on the Floor from 1901, for instance (Fig. 6). But how wan are these rays of the northern sun that filter through partially drawn curtains to expose the unyielding geometry of the interior space. More typical of the artist is Interior, Artificial Light from 1909 (Fig. 7), very nearly a black monochrome, in whose twilit space the eye of the viewer gropes its way around indistinct  furnishings that are illuminated by little more than two dim and insufficient candles. 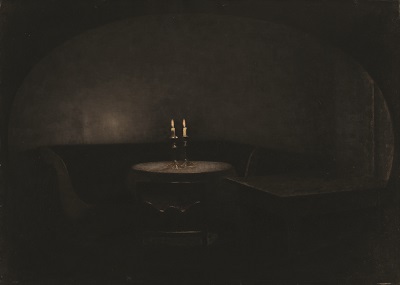 Paintings, by their very nature, are of course silent and still. But it is only through exposure to the morbid silence and the metaphysical stillness of Hammershøi that we come to appreciate just how much sound and movement are implicit in almost every other painting produced by Western art since the Renaissance. Even in his street scenes of Copenhagen—in The Buildings of the Asiatic Company, Seen from St Annæ Street (Fig. 8) and his depiction of Amalienborg Palace Square, dominated by the equestrian monument to Frederik V (Fig. 9)— we are acutely aware of the absence of all sound or movement. Surely these depleted scenes are intended to suggest that “extremity of personal absence” (in Henry James’s phrase) that is death itself. And the darkness that gathers around the edges of these works, that in several instances overwhelms them utterly, is likewise suggestive of that final, terminal extinction of light. 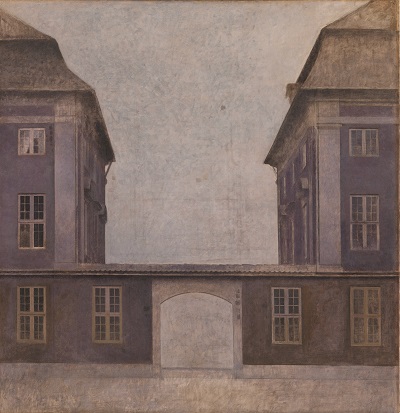 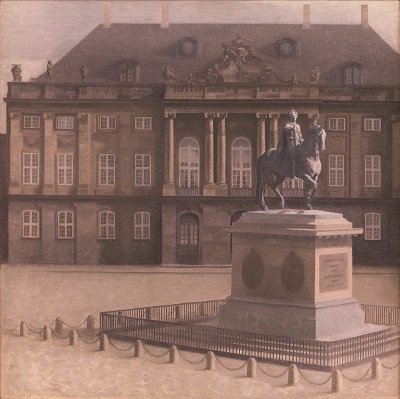 To a rare degree, these paintings embody a mood that seems to have been specific to the fin de siècle, an age that, in the music of Gustav Mahler and the novels of Thomas Mann no less than in the art of Hammershøi, was haunted by the specter of death. Nothing quite like that mood appears in any of the earlier interiors that abound in Western art, and based on all the available evidence, it is a mood that is no longer available to our contemporaries. In the case of Hammershøi it is heightened by that malaise du nord that has caused many another Scandinavian to look longingly toward the life-affirming sunshine of Italy and Greece. 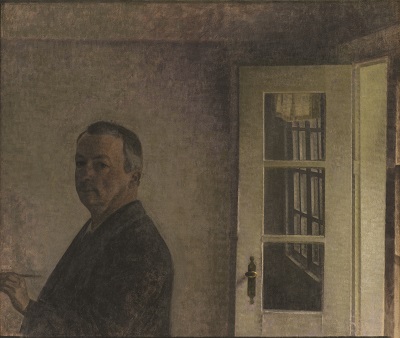 But if Hammershøi’s paintings, in their totality, express a world view that is instinct with sadness, it is often a rich and redolent, a beautiful sadness, a sadness that is largely free both of the ecclesiastical consolations of an earlier age and of the anxiety and cynicism of more recent times. This sadness consists in a sense of surrender to an irresistible and universal process, even as it is redeemed by an intuition about the ability of art and beauty to break through to transcendence.

Painting Tranquility: Masterworks by Vilhelm Hammershøi from SMK—The National Gallery of Denmark is on view at Scandinavia House in New York until February 27, 2016.