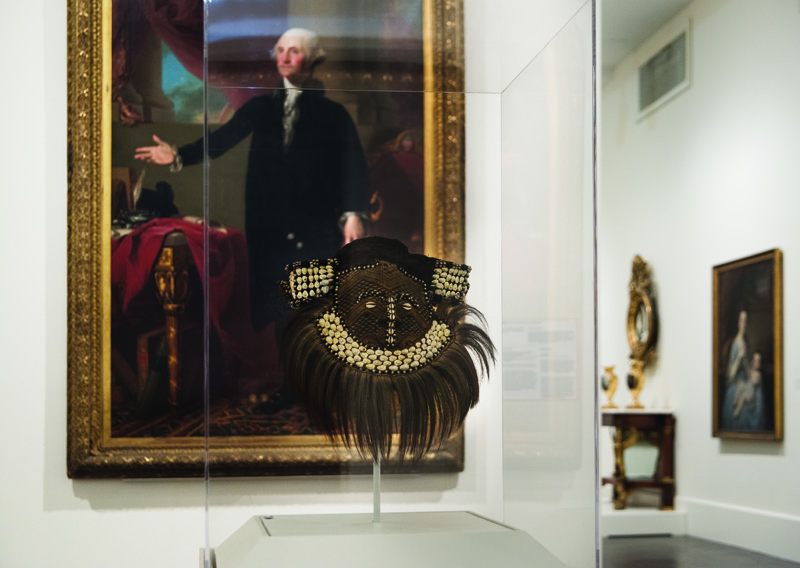 As they are with their collections of Native American art, many museums are rethinking the way they present, describe, and discuss the art of Africa. The Brooklyn Museum, which boasts one of the country’s most important collections of such work, has taken a noteworthy approach. In a curatorial project entitled African Arts—Global Conversations, historical and contemporary works of African art have been placed throughout the museum in juxtaposition with other artworks from around the world, in order to reveal the common themes and concerns of the artists who made them, and, in the case of older African works, offer a way for visitors to think of them as something other than ethnographic artifacts.

In one of the more striking examples of works mounted in counterpoise, a 1796 portrait of George Washington by Gilbert Stuart faces a late nineteenth- or early twentieth-century ceremonial mask made of leather, and adorned with cowrie shells and monkey fur, from the Kuba people in what is today’s Democratic Republic of the Congo. The relationship? Both depict national leaders. The mask is a representation of a king. Other interesting juxtapositions include that of four processional crosses, including one from fourteenth-century Italy and another from the Ethiopian Orthodox church, and a still life by artist Beauford Delaney, a leading light of the Harlem Renaissance, paired with a Fang reliquary figure from Gabon.

The Brooklyn Museum was the first in the United States to mount an exhibition of African art as art (though the title of that 1923 show—Primitive Negro Art, chiefly from the Belgian Congo—is cringe-inducing today for several reasons). The museum is now preparing for a re-installation of its African art collection in new galleries that are adjacent to the galleries for its celebrated Egyptological collection—uniting the art of the continent.

African Art—Global Conversations was originally scheduled to run until November 15 at the Brooklyn Museum • brooklynmuseum.org