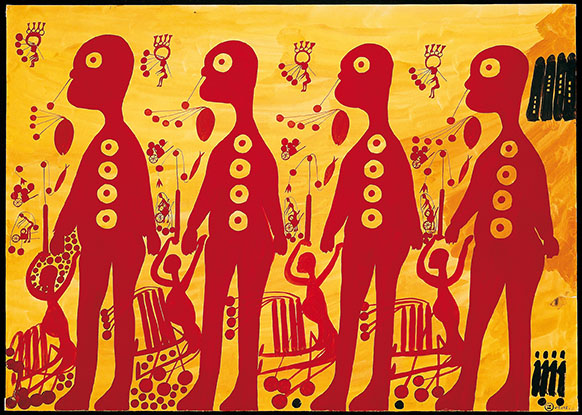 Carlo Zinelli (1916–1974) suffered from schizophrenia, and was further traumatized by his experiences as a soldier in the Italian army during World War II. In 1947 he was committed to a psychiatric hospital in his native Verona, but years of treatment seemed to have no effect on his condition. Then, in 1957 Zinelli was allowed to work in a painting studio on the hospital grounds. A kind genius began to blossom. Zinelli painted for up to eight hours a day, producing nearly nineteen-hundred works of art.

Fifty-five of his paintings are now on view at the American Folk Art Museum, in the first-ever museum show of Zinelli’s work in the United States. Valérie Rousseau, curator of self-taught art and art brut at AFAM, believes that it is possible to identify phases in the development of Zinelli’s iconography. His signature motifs are simple, brightly colored human and animal figures, almost always shown in profile and often covered in dots that might represent holes. The artist Jean Dubuffet— who first championed the work of outsiders as a class of art—learned of Zinelli’s work from his psychiatrist Vittorino Andreoli in the 1960s. He added ninety-nine pieces to his Collection de l’Art Brut in Lausanne, Switzerland. Zinelli’s mental state deteriorated after he was relocated to a new hospital in 1969. Disoriented by the move, he painted very little, and died five years later.

Untitled by Zinelli, 1970. Collection of Robert A. Roth; photograph by Bill Bengston.