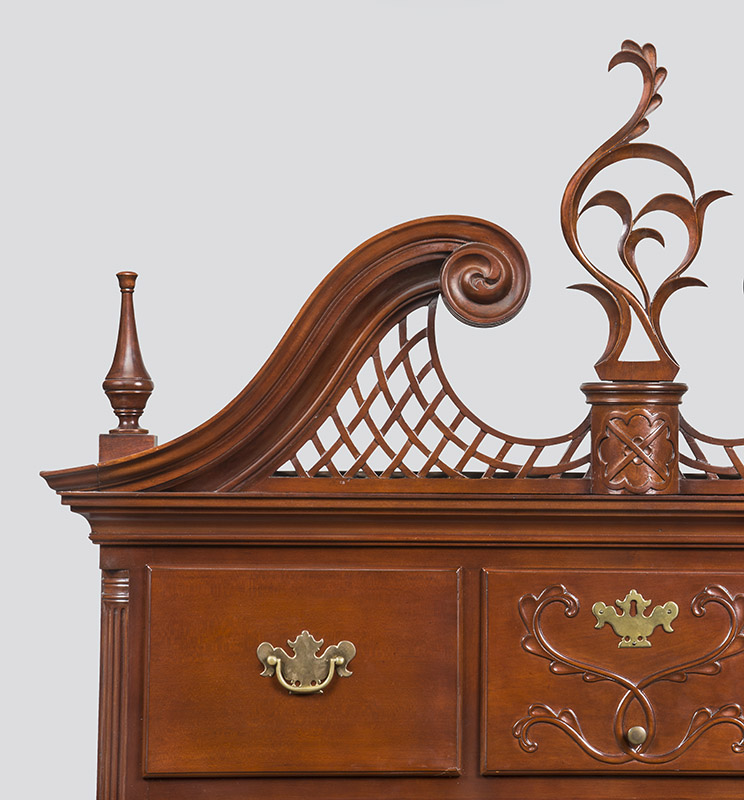 An article on the design strategies of eighteenth-century cabinetmakers Benjamin Frothingham (Massachusetts, 1734–1809) and Eliphalet Chapin (Connecticut, 1741–1807) appeared in American Furniture in 2017. Written by master carver Will Neptune and North Bennet Street School instructor Steve Brown, the article detailed a discovery: that a set of proportions corresponding to the Tuscan and Ionic orders of classical architecture had guided Frothingham and Chapin’s hands in their design of a pair of case pieces: “every part . . . mathematically related to every other part, and visual complexity accumulat[ing] step-by-step.”

The discovery sheds light on the working methods of these two craftsmen, and likely provides a key to understanding the furniture of other makers from their era, a story that’s hard to tell except through several thousand words of scholarly erudition and mathematical formulas. It’s easier to show, and, now, happily, that’s exactly what’s happening. The high chest attributed to Chapin that’s discussed in American Furniture is in the collection of the Wadsworth Atheneum, and while Neptune was doing research about the piece, Brandy Culp, the institution’s curator of American decorative art, became intrigued. “I was just fascinated by this fresh look at a Connecticut icon,” she says. “I asked Will if we could turn the text that he’d helped write for Chipstone into something in the round, an exhibition.”

The result is The Mathematics of Elegance, an exhibition in a new gallery on the second floor of the Wadsworth’s Avery Memorial building that takes Chapin’s high chest as its subject. That piece is on view, as is its twin (also in the Wadsworth’s collection), along with contemporaneous books of design and Neptune’s working drawings. The first chest is shown all of a piece, the other is “deconstructed,” in a manner of speaking, into lower case, upper case, and drawers, giving viewers a better look at how the piece came together. Made in East Windsor Hill, Connecticut, between 1775 and 1785, it boasts the type of rococo embellishments popularized in the anglophone world by Thomas Chippendale’s 1754 Director, and which had—at the time—only belatedly made their way to the Americas. Wall labels explain the set of classical-design principles—more commonly found in architecture—that guided Chapin’s creation of elements large and small, from the length of the legs and top and bottom cases to the minute- and second-degree turns of the scrolls and spider-web-like filigree in the pediment, as well as the graceful sweep of its cabriole legs terminating in Chapin’s specialty: exquisitely rendered ball-and-claw feet, a motif of Asian origin meant to evoke pearls clutched in the talons of dragons.

“By breaking it down so the general museum visitor can better appreciate the process of eighteenth century design,” says Culp, “We hope people take a second look, and that it makes people think differently about furniture of the period.”