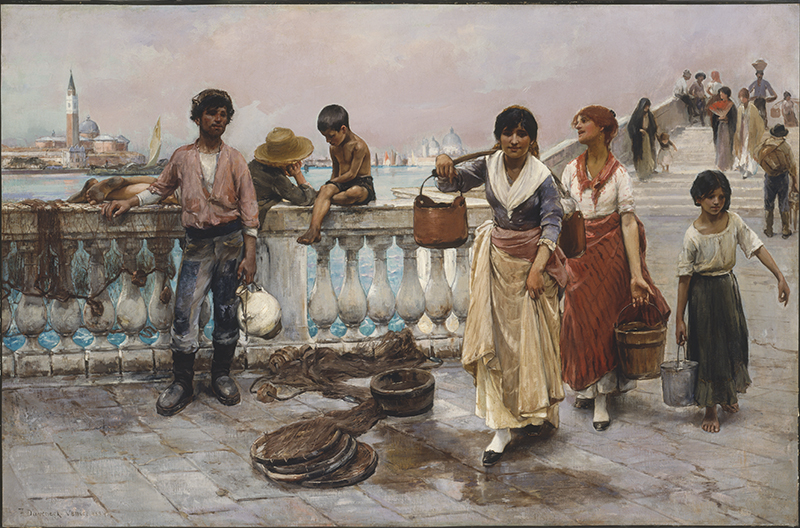 Although it would be foolish to suggest that the influential and wildly productive Jean-Léon Gérôme is lost to history, it is safe to say that the great academician is perhaps less widely known today than his students Thomas Eakins and Mary Cassatt. And while it would be equally foolish to suggest that Frank Duveneck is but a footnote to his more recognizable students, such as John Henry Twachtman, the Kentucky-born artist is not the name he was in his day. Reviewing a 1972 show at Manhattan’s Chapellier Galleries, critic John Canaday described Duveneck as “a painter who promised to establish a major position in American art but stopped halfway through his career and settled for a minor one.” To be fair, Canaday also asserted, “His best paintings . . . can still bring you up short. . . . They have the air of quickly executed classroom demonstrations by a painter who in his studio might have rivaled Manet.”1

Success and esteem—which Duveneck very much enjoyed—are no guarantee of an enduring reputation and lasting legacy. And history is rarely unendingly kind. So it is welcome news that the Cincinnati Art Museum (CAM)— which houses the largest collection of Duveneck’s work—is giving the artist a good hard look with Frank Duveneck: American Master. The museum’s last in-depth Duveneck show was 1987’s An American Painter Abroad: Frank Duveneck’s European Years. The current exhibition, organized by Julie Aronson, CAM’s curator of American paintings, sculpture, and drawings, casts a wider net to fully examine the artist’s training, influence, and work as painter, sculptor, and etcher. “This project more fully utilizes our collections than any previous exhibition, presenting a fully integrated display of the Cincinnati works across all media and in the context of thirty-five major works on loan from other museums and private collections,” Aronson says. “There is still a lot to uncover about this artist and his milieu, but we have taken an important step.”

The son of German immigrants, Duveneck was born just across the Ohio River from Cincinnati in Covington, Kentucky, in 1848. He reportedly demonstrated a creative streak early on and as a teenager was apprenticed to a local firm that produced paintings and sculptures for the decoration of Catholic churches. He contributed to commissions in Kentucky, Pennsylvania, New Jersey, and Quebec before heading to Germany in 1869, where he enrolled in the Royal Academy of Fine Arts, Munich. Studying under Wilhelm von Diez—who encouraged quick studies and nonacademic subject matter—Duveneck proved an apt pupil and in 1872 produced a signature work: Whistling Boy (Fig. 1). Arguably one of the artist’s best-known canvases, it depicts a lad clad in a workers’ apron, an expression somewhere between indifference and defiance clearly delineated on his face. While the facial features—the pursed lips and pudgy nose—are solidly modeled, the torso is rendered with a loose and lively touch, a nearly non-illusory approach that seems to embrace the notion of paint as paint.

These two poles—the attentive mastery of realism and a willingness to explore a kind of visual vehemence—marked the essential parameters of Duveneck’s endeavors. As André Dombrowski notes in his catalogue essay, Duveneck “belonged to the generation of late ‘painterly Realists’ that emerged in the mid-1860s, whose manner of Realism had shifted from Courbet’s initial formulation of the style in the 1840s: darker and more demonstrably painted, more directly inspired by seventeenth-century models like Frans Hals and Jusepe de Ribera.”2

Although Duveneck’s work was considered respectable in fairly short order, an early presentation in Munich left one observer questioning his “large color blots” and portraits that “allow us to recognize so little of any particular forms, neither the main nor the peripheral.”3 Even after a successful Boston debut in 1875, a certain unscrubbed modernity in his work could induce squeamishness. When The Turkish Page was exhibited in New York at the National Academy of Design in 1877, visitors appreciated the exoticism conveyed through the handsomely rendered brass vessel, animal hide, and plumed bird, but found the waif at the center of the image off-putting (Fig. 2). The enervated youth (“ugly in form and repulsive in face,” according to the New-York Tribune4 ) possessed none of the sweetness and light that would prove so appealing in the urchins of John George Brown or William- Adolphe Bouguereau. But from the start, Duveneck had his admirers, including the Boston-born, Europeanbred Elizabeth Boott (Fig. 7), whom he later married, and her friend, Henry James. Although James found the humbly-born Duveneck “terribly earthy and unlicked,” he deemed him “an unsuspected man of genius.”5

Central to the growing general appreciation of Duveneck’s efforts was the seeming spontaneity of his brushwork, a gestural dynamism that suggested not only a swiftness of execution (the artist was known to work quickly) but a masterful assurance of intention. Boott, an artist herself, studied with Duveneck before their engagement and wrote of his methods, “Everything is moist, he paints in a puddle, in fact, as one guesses from the look of his things.”6 This fluid aspect became the primary formal strategy in the plein air paintings Duveneck first produced at Polling, in the Bavarian countryside, in 1878. The looseness, which formed a sort of structural vagueness in such works as the Whistling Boy, assumed in these relaxed renderings of the landscape, a kind of impressionistic specificity (Fig. 14).

While an implied celerity is a signal attribute of Duveneck’s practice, his process was not always solely a matter of swift execution. “He was a wonderful and adept draftsman, in fact, and created a variety of different types of drawings for a range of purposes,” says Aronson. “He made an abundance of gestural thumbnail sketches that he transformed into compositions for his paintings, as well as more composed figure studies and portrait drawings made before the model. For the first time, our project, with the scholarship of Elizabeth Simmons, research assistant for the Cincinnati Art Museum, looks at the importance of drawing to Duveneck’s pedagogy and practice.”

Duveneck had begun teaching in earnest at Munich in 1878, where his students included Twachtman, Theodore Wendel, and John White Alexander. Various “Duveneck Boys,” as they were known, followed Duveneck to Venice and later Florence. “He almost exclusively taught life classes before the model, which, with its basis in the interpretation of nature, was for him the essence of art education,” Aronson says. “Like other academically trained artists of his time, he appeared for criticisms periodically, otherwise leaving his students to work, but he also occasionally joined them in art-making sessions. He was known to demonstrate improvements by putting his brush to students’ canvases.”

Not unlike his visits to the German countryside, Duveneck’s Italian sojourns propelled his work in new directions. Dark portraiture gave way to cityscapes and genre scenes rendered in a lighter palette. “Water Carriers, Venice [Fig. 3] is the centerpiece of Duveneck’s Italian period,” Aronson says. “The painting has a casual, relaxed quality to it that belies all of the thought and work he put into it. The pearly lightness of it we don’t usually associate with Duveneck— he uses the blue of the water and the pale yellow and red of the skirts as accents in a composition with a lot of white and various grays. Duveneck gives the composition energy and interest by using diagonals. The staircase forms a diagonal into the depth of the space at the right and the women continue that line moving out towards us. It is keyed to appeal to an American audience and it quickly entered the collection of an American living abroad.”

After Elizabeth’s death in 1888, Duveneck returned to the United States. While he continued to visit Europe regularly, his commitment to art and artists in his native country grew ever more pronounced. He joined the faculty of the Art Academy of Cincinnati, presented his work at expositions and venues across the nation, and served on multiple juries and selection committees. He was a valued advisor to CAM director Joseph Henry Gest, offering input on acquisitions. Duveneck died in 1919, but his reputation was vital enough that the Whitney Museum of American Art devoted a show to his work two decades later. As peers and pupils passed from the scene, the artist’s profile faded. But this painter’s painter legacy remained fresh for those with eyes to see. “Duveneck is a great master,” Robert Henri remarked in 1936. No student painter sharp enough to grasp Duveneck’s achievement, he said, could but be “inspired to develop for himself a technique of corresponding dignity.”7

Frank Duveneck: American Master is scheduled to be on view at the Cincinnati Art Museum from December 18, 2020, to March 28, 2021. cincinnatiartmuseum.org

THOMAS CONNORS is a Chicago-based arts writer whose work has appeared in a variety of publications, including Fine Art Connoisseur, Hali, and Art and Auction.