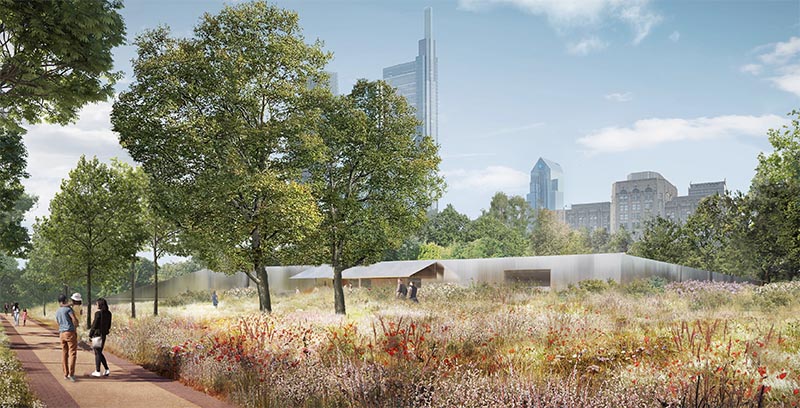 As design historian Glenn Adamson once noted in our pages, from a certain vantage point in Philadelphia you can see the work of three generations of Calders. Standing beneath Alexander Calder’s 1964 mobile Ghost at the Philadelphia Museum of Art, you can look up Benjamin Franklin Parkway to see the Fountain of the Three Rivers, sculpted by Alexander Stirling Calder, the mobile-maker’s father, at Logan Square, and then look further in the distance to the bronze statue of William Penn atop City Hall, the work of Alexander Milne Calder, his grandfather.

Soon there will be a fourth Calder attraction along the parkway: Calder Gardens, a nearly two-acre, multilevel sculpture park with enclosed exhibition spaces for the display of mobiles and stabiles by Alexander Calder, plans for which were unveiled today by the project’s board of trustees. “Our intention for Calder Gardens is not only to create the ideal environment for the public to encounter my grandfather’s work but also to elevate personal contemplation and reflection,” said Alexander S. C. Rower, president of the Calder Foundation. “Calder’s role as a pioneer of experiential art is essential to his legacy. For viewers who open themselves up to the possibilities of his mobiles and stabiles, the unexpected takes root. His objects continuously unfold in real time.”

The exhibition spaces were designed by Herzog and de Meuron, the Swiss architectural firm known for project such as the Beijing National Stadium and the de Young Museum in San Francisco. The surrounding gardens have been conceived by Piet Oudolf, the designer of New York’s High Line, who is known for naturalistic landscapes featuring perennials and native grasses.

Calder Gardens—which will be situated between 21st and 22nd Streets on the parkway, across from the Barnes Foundation—is scheduled to open in 2024.