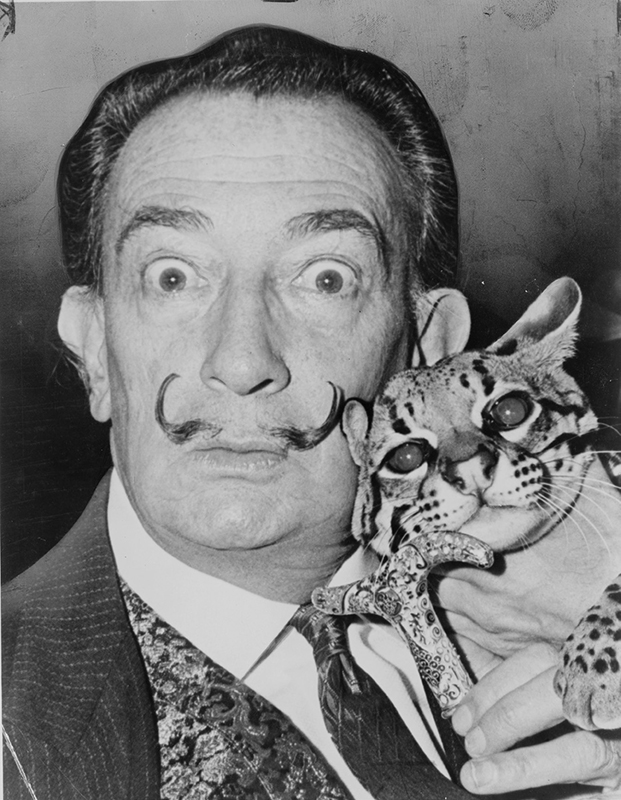 Salvador Dalí is a figure who transcends fine art and popular culture. Known as much for his assertive mustache as for his fantastical paintings— such as the melting clocks of The Persistence of Memory—the Catalan artist was a shrewd manipulator of his own image and was fascinated by celebrity, iconography, and mass media. Part pop artist, part avant-garde visionary, part madman, Dalí took the everyday and transformed it into the surreal.

Dalí’s vision was of a world without boundaries— houses made of dreams, sofas in the shape of lips, telephones with lobsters for handpieces. He created jewel-encrusted brooches in the shape of sea creatures for wealthy art collectors, but he also cut up magazines to make collages. Nothing was too mundane to escape his manipulation. Perhaps his most famous collage is Mae West’s Face which May be Used as a Surrealist Apartment, in which he transformed the sultry performer’s hair into curtains and her lips into a stylish divan. Other experimentations with magazines were unearthed during the 2004 exhibition Dalí and Mass Culture: doodles of ants upon crossword puzzles and a Life magazine cover wherein he added anatomical detail to two female sculptures. The extent to which Dalí used magazines in his work is difficult to ascertain, as these creations seem done in haste and with ephemerality.

Thus, it was not until very recently that many of us on the ANTIQUES editorial staff became aware that Dalí employed the cover of one 1974 issue of our magazine as his canvas. The artwork is held by the Dalí Museum in St. Petersburg, Florida. The unaltered cover depicts London’s Crystal Palace, site of the Great Exhibition of 1851, as seen from the front gate. With careful strokes of paint, Dalí has transformed the leaves of an overhanging tree into a woman’s face. He was a master of the double image; as the Dalí Museum notes: when you see the trees, you don’t see the woman; when you see the woman, you miss the trees.

When we look at Dalí’s woman in the trees, we can choose to see her or not to see her. Surrealism, as an art movement, was much the same way. In surrealist circles, dominated by men, women were heralded as muses but rarely as creators. This discovery has given us an opportunity to reflect on the role of The Magazine ANTIQUES in popular culture, the hands it’s ended up in, and what this rarely-seen piece of Dalí artwork may mean within the artist’s pantheon of works incorporating the fragmented body.