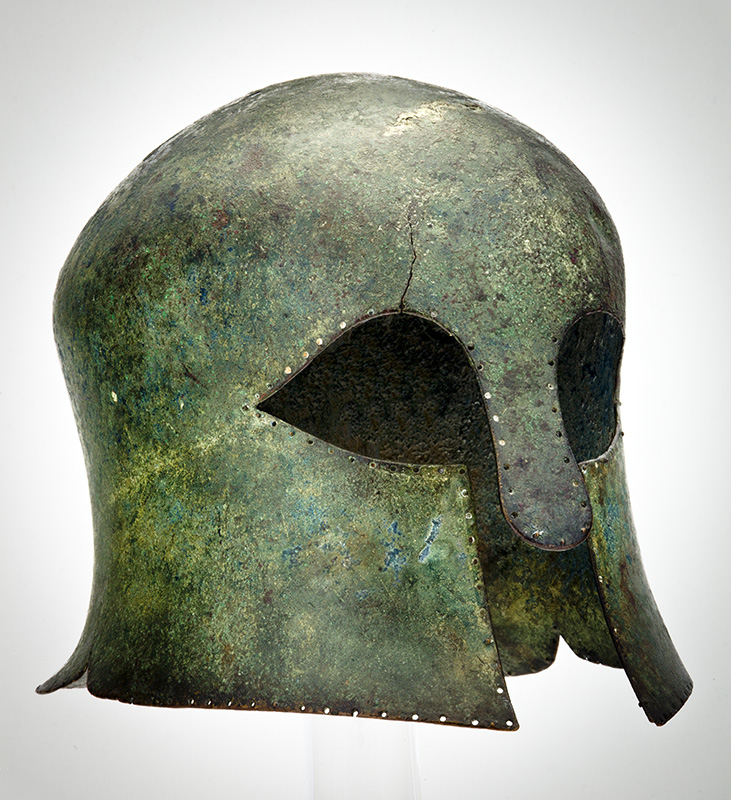 Nine-and-twenty knights of fame Hung their shields in Branksome Hall;

Ten of them were sheathed in steel, With belted sword, and spur on heel

They carved at the meal With gloves of steel, And they drank the red wine through the helmet barred.

Organized by Jeffrey Forgeng, the Higgins Curator of Arms and Armor and Medieval Art at the Worcester Art Museum, the traveling exhibition, The Age of Armor: Treasures from the Higgins Armory Collection at the Worcester Art Museum, is at the Toledo Museum of Art through February 27, 2022. Including more than eighty works, the exhibition spotlights the development and history of the classic knightly suit of plate armor—which was used from the mid-1300s to the mid-1600s—and how different kinds of armor have been employed around the globe, from ancient to modern times. The show features armor for the battlefield, but also that created for tournaments and ceremonies, thereby revealing not only the practical function of armor, but also its cultural role as a symbol of personal identity, social prestige, and the values of a heroic past.

Had John W. Higgins been born with a silver spoon in his mouth, he probably would have exchanged it for one of steel. Although his younger sister grew up to be the novelist Olive Higgins Prouty (1882–1974), author of Stella Dallas and Now, Voyager (both of which became Hollywood films), others in the Higgins family had mechanical predilections. According to family tradition, their father, industrialist Milton Prince Higgins, paid his way through Dartmouth College by working as a blacksmith.

Milton Higgins helped found the engineering school at Worcester Polytechnic Institute, which John subsequently attended. In 1896, upon graduating with a degree in mechanical engineering, John entered his father’s firm, Worcester Plunger Elevator Company. (“Plunger” was the term for hydraulic elevators.) When Milton sold Plunger in 1902, he and John jointly purchased the Worcester Ferrule and Manufacturing Company, which they reorganized into Worcester Pressed Steel (known as Presteel). An important maker of rolled sheet-steel products, the company adopted an armored knight as its emblem. When Milton Higgins died in 1912, John succeeded him as president and treasurer.

The outbreak of war in Europe created a new demand for steel products, and on America’s entry in 1917, Higgins consulted Bashford Dean (1867–1928) founder and curator of the arms and armor department at the Metropolitan Museum of Art, who designed a prototype combat helmet for American troops. Not surprisingly, Dean based his deep, bowl-shape prototype on medieval helmets. Unfortunately, it proved impractical and possibly too expensive to produce. Nevertheless, Dean proved to be an invaluable friend and advisor thereafter.

Postwar America entered the Roaring ’20s, and among the trends followed by certain moneyed Americans was armor collecting. Following the example of newspaper tycoon William Randolph Hearst (1863–1951), who was loading his Pacific coast castle, San Simeon, with a gallimaufry of art, antiques, and armor, Higgins surrendered to his chivalric desires. As Europe’s financial woes forced its impoverished aristocracy to auction their family treasures, including vast amounts of armor, Higgins took advantage of the situation and began to collect armor seriously in 1926, first acquiring “one or two copies of suits,” while still aspiring to own “an interesting genuine museum piece.” Then, in 1928, advised by Dean, he purchased seven full suits of armor from the influential and often controversial British art dealer Sir Joseph Duveen (1869–1939). The growth of his collection soon inspired Higgins to display his treasures in a purpose-built gallery. Situated adjacent to the Presteel factory, the new museum was built between 1929 and 1931 to a handsome art deco design by Boston architect Joseph D. Leland (1885–1968). Higgins intended the building to celebrate steel as art. In fact, it celebrated his two great loves: within the elegant steel and glass facade, which also housed the Presteel offices, the galleries were fashioned with soaring Gothic arches and a vaulted ceiling suggesting the Great Hall of a medieval castle.

By the time Higgins died in 1961, his European collection included several dozen full suits of armor, three thousand armor components, and one thousand weapons and accessories. His non-Western arms included hundreds of objects from Japan, the Islamic world, South Asia, and Africa. There also were tapestries, sculptures, paintings, and other artworks relating to armor. However, the 1970s and its challenging economic climate wrought great changes to the museum, especially after the closure of Worcester Pressed Steel in 1975.

The ensuing decades brought numerous ups and downs, but though it survived one crisis after another, with the severe economic downturn of the early 2000s the museum found itself on borrowed time. In November 2013 the Worcester Art Museum concluded an agreement to take the Higgins Collection, which was transferred there in 2014. Today the preserved Higgins Armory (still crowned with its shining armored knight) has been converted into a stylish events center. And while the Worcester Art Museum renovates its armor galleries, John W. Higgins’s choice treasures are touring the nation.

Reflecting on the importance of the Higgins Collection and certainly the rare opportunity in this age of non-fungible tokens to view and examine such a traditional form of both craftsmanship and metalic art offered by the current tour, the Worcester Museum’s Forgeng observes (by email) that, “Ironically, medieval-style arms and armor are being produced in greater quantities today than they ever were during the Middle Ages—certainly in virtual media like computer games, and perhaps even in physical form as reproductions. The objects in this exhibition offer a rare opportunity to get up close and personal with the real thing. They are real objects originally worn and used by real people, and they offer us a unique window on a world that continues to thrive in our imaginations half a millennium later.”

The primary source for this article, including documentary quotations, is “John Woodman Higgins and the Higgins Armory Museum,” Higgins Collection Digital Archives, Worcester Art Museum. Following its stop in Toledo, the national tour continues at the Denver Art Museum in Colorado, May 15–September 5, and the Cummer Museum of Art and Gardens in Jacksonville, Florida, October 4–January 8, 2023.