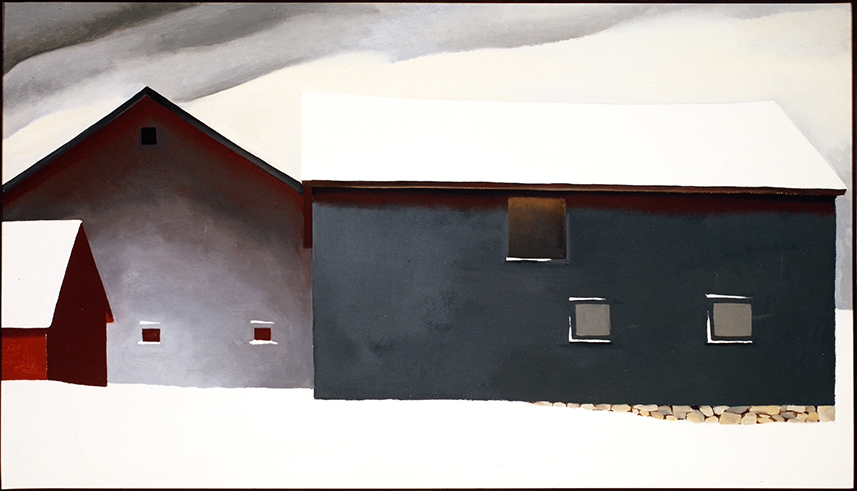 A decidedly different perspective on the pasture can be seen at the Brandywine River Museum of Art in Pennsylvania.

While modernism was taking root in the cities of Europe, in this country urban artists from the Stieglitz circle and regionalist painters alike looked inland to the hinterlands, searching for an American style. “Rural modernism,” according to the Brandywine show, is what they created.

Drawing on techniques imported from the Continent and developed in the artistic crucibles of New York, Chicago, and Boston—but also in bucolic locales like rural Iowa and Texas—painters such as Georgia O’Keeffe, Maynard Dixon, Josephine Joy, N. C. Wyeth, and others created a body of work that was ebullient and beautiful—but often anything but idyllic.

Disaster was a common theme in the days of the Dust Bowl. Alexander Hogue’s Crucified Land (1939) depicts a field scarred with deep ravines of a color that is only a few shades lighter than blood, and in James Brooks’s Oklahoma Barbershop (1931) a small gray building sits like a smudge in a dark and forbidding landscape of red earth that’s more reminiscent of Mars than of the Midwest.

Long a staging ground for the triumphal procession of homesteaders, speculators, and adventurers, the American landscape was beginning to turn ugly. In Harold Weston’s The Lumberman (1922) a faceless figure raises his ax over his head, cruciform logs at his feet, making his way toward the edge of a thinning forest. One can imagine the Pacific lying just beyond the purple mountains in the background, the lumberman unwittingly clearing his way to nothingness, what once seemed an endless continent at last coming to its terminus.