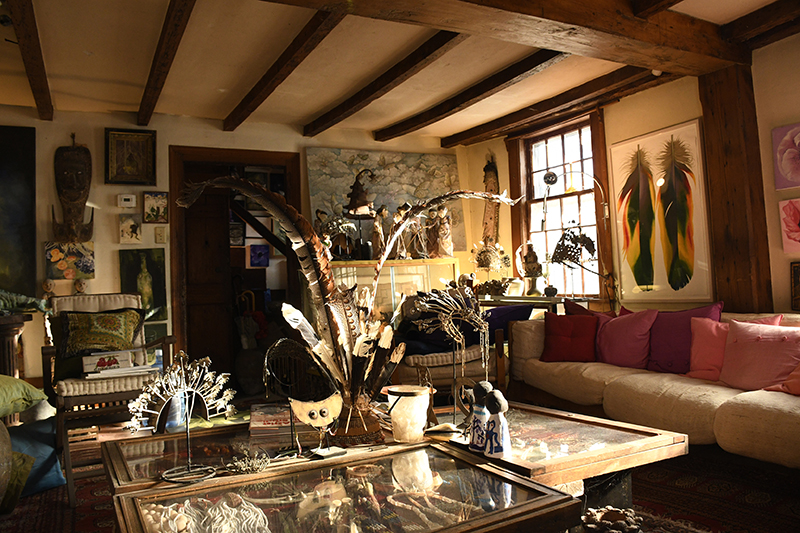 Marblehead, Massachusetts, just sixteen miles north of Boston, has long been a place with ties to other parts of the world. In the eighteenth and nineteenth centuries, maritime merchants and the men who sailed their ships made their livings catching fish, hunting whales, and trading in merchandise from afar. Many clapboard- and shingle-sheathed houses, built with fortunes made from the sea, still stand in the town. They impart a charming, innocent feel to this once rough, now gentrified stretch of New England shoreline. One such house, built in 1695 by a cooper named John Homan, who made barrels for packing cod, holds the treasures of a more recent explorer. Mary Jo McConnell, an artist, naturalist, and adventurous collector, has occupied this tiny, timber frame saltbox since 1965.

A printmaker and painter of prodigious energy, McConnell decided in 1993, after a conversation with the Smithsonian’s then-secretary S. Dillon Ripley, that she would travel to Papua New Guinea to see firsthand and document the behavior of a rare group of wild birds called bowerbirds, the males of which create colorful palettes of materials around nests they build on the ground. By arranging fruits, nuts, flowers, and even man-made objects in their “gardens” on the forest floor, the male birds can attract discerning females to become their mates. The effects can be stunning. When McConnell had a chance to see the birds and their distinctive bowers in person, she was dazzled by their extraordinary displays and intrigued by their behavior.

McConnell spent parts of the next twenty years documenting the lives of Vogelkop bowerbirds (Ambylornis inornatus), which are known as “the clever ones” by the tribespeople who share their mountainous terrain. “Scientific research by outsiders was banned by the government,” McConnell explains, “but because I was an artist, I was allowed to go anywhere I wanted. I had to get permission from government officials to cross tribal borders, and they viewed me with some suspicion, but the local people could not have been more welcoming, friendly, and helpful.”

With her artistic materials in hand, she made seven arduous trips to the remote Indonesian province of West Papua, the westernmost section of the island of Papua New Guinea. Living in villages, she visited the bowerbirds’ nesting areas high in the Arfak Mountains and recorded the birds’ behavior in her paintings and field notes. She also collected plants and insects used in the bower decorations for analysis at home. She preserved her memories of Indonesian cultural life with artifacts she acquired from people she met along the way.

An avid collector of all things interesting and beautiful, McConnell often compares herself to the bowerbirds she studies. And her house does resemble, at least in spirit, some of the extravagant bowers she has recorded during her trips. On entering its cozy, low-ceilinged living room, one is immediately struck by McConnell’s manifestly boundless curiosity, her love of color, her artistic talent, and her discerning eye as a collector. Intricately interspersed with what she has created herself is a rich array of material culture that she has assembled over the last six decades. There are textiles, carvings, and intriguing handmade objects not only from Indonesia, but from many other parts of the world as well.

McConnell developed her love of natural history with influence from her father while she was a child in the Finger Lakes region of New York State. A passion for art eventually overtook her interest in science, and her initial plan to pursue a scientific career morphed into an artistic one that combined both fields. Her creative zeal was bound up with an attraction to the cultural history of other parts of the world, which she began to experience firsthand soon after her marriage in 1959.

Her naval aviator husband became a commercial airline pilot, and McConnell found the world at her fingertips. As the spouse of a pilot, she could travel for free to almost any place she wanted to go. She chose places with rich art traditions and cultures very different from the ones with which she had grown up. On frequent visits to Haiti and then Bali, she immersed herself in the lives of the people there and brought home creations ranging from metal-scaled fish models and carved animals to textiles, jewelry, and ceramics. Her own artistic endeavors were stimulated and enriched by her travels. As the style of her paintings, prints, and fabrications evolved, McConnell’s ethnographic collections grew and became more meaningful to her.

On the walls of her house and in glass-covered table-cases on its first and second floors are exquisite necklaces, bracelets, and other artifacts from the native people she came to know and admire during her time abroad. Everywhere one looks are unusual things that are at once arrestingly eye-catching and full of backstories that reflect ways of life that are in steady decline around the world: shell necklaces used to barter for brides in New Guinea, textile spirit bags festooned with the claws of birds of prey, the bones of small marsupials, boar-tusk bracelets, and gourd-made penis sheaths selected and used by their original owners both to conceal and advertise their anatomical attributes. An exhibit case on the first floor is filled with feathered headdresses woven from natural materials. Some had seen years of use in festive ceremonies; others served to validate the supernatural powers of the shamans who made and wore them.

On a glass case in her living room, a troop of Javanese shadow puppets stands ready to perform. The soft, organic colors of their woodblock- printed robes are echoed in the fabrics hanging on the wall behind them. Their delicate, porcelain heads shine in dappled sunlight from a window.

The ancient wood framing of her house is textured and dark, but the walls are light, and every room seems to pulse with color. Adding to the joyful, faraway spirit of McConnell’s home are the cries of parrots, macaws, a silvery-cheeked hornbill, weaver finches, rollers, turacos, society finches, and canaries. Some of their blue, yellow, green, and orange feathers, transformed by McConnell into enormous prints that hang on her walls, offer form and structure that are as eye-grabbing as their colors. She devotes a good deal of time each day to preparing meals of fresh fruit and vegetables for the birds and cleaning their walk-in aviaries. In return, they provide her with companionship, cheerful serenades, and artistic inspiration.

McConnell once had as many as fifty live birds. Now the number is probably closer to thirty-five. All of them remind her of the time she has spent in the wild. There is no television in her house, and no computer. Her life is focused on the living world and the art she can create from it, rather than what she might be able to find online.

McConnell resists the lure of scientific illustration per se. She prefers to see art in science—and everything else—rather than science in art. Early on in her study of bowerbirds she developed a remarkable theory: that the male birds she was observing were not simply attracting mates to their bowers for reproduction, but also were using their vibrant displays to express artistic talents. On each of her trips, even when the locations of their bowers had changed, McConnell was able to identify individual birds by the distinctive styles of their bower construction. She also discovered that the vegetation they used for display was rarely edible, thus dispelling the belief that they were simply utilitarian attractions chosen to demonstrate spousal and parental capability.

To reinforce her sentiments about the birds’ artistic talents, McConnell, as she once said in a lecture, gave some of them names that she believed reflected their personalities: Leonardo da Vinci, “serene, composed, refined, the Renaissance master”; Vincent van Gogh, a bird with a “loose, splashy, bright palette and driven energy”; Paul Klee, a soft and linear avian artist who “painted with precise delicacy”; and Andy Warhol, a bird that used “tin cans, tapes, ribbons, and gimmicks” in his constructions. Because these were the individuals whose individual styles she could most easily identify, it was their bowers she chose to record during her successive expeditions.

McConnell’s multiple visits to the Arfak Mountains in West Papua have been supported by her friends at home, as well as the new friends she has made among the Soughb tribal people in the area where the bowerbirds live. She lived in their village, Hungku, as she made daily sojourns into the steep slopes surrounding it. To find her subjects’ bowers, she was guided by the tribe’s chief, Moses Saiba, and some of their most skillful hunters.

When McConnell first visited Hungku, she paid the people of the village to refrain from eating the bowerbirds, but over time, through her own repeat visits that demonstrated that the birds could support a small but lucrative trade in ecotourism, she convinced them that protecting the birds was in their own best interest. Her goal now is to ensure the birds’ continued protection. “Our greatest challenge is from people outside of Hungku who want to cut the forest and mine the copper and gold that lies under it,” she says with dismay. In Indonesia’s unregulated scramble to exploit the area’s resources, she fears that commercial interests will displace and destroy the bowerbirds to which she has devoted the last thirty years of her life. Despite what she might do to help from afar, in the end, the only ones that can safeguard Leonardo, Vincent, Paul, and Andy and their bowerbird offspring from destruction are the Soughb people who share their forest habitat.

Marblehead, Massachusetts, is a long way from Papua New Guinea, but McConnell’s house conveys the feeling of that faraway country with its wide array of artifacts and her life-sized paintings of the bowerbirds’ marvelous arrangements of nuts, berries, flowers, mushrooms, and feathers. Wandering through its light-filled rooms and admiring the treasures McConnell has acquired over a lifetime of travel, one can feel like a bowerbird, drawn to the artful assemblages of a uniquely gifted “clever one” in human form.