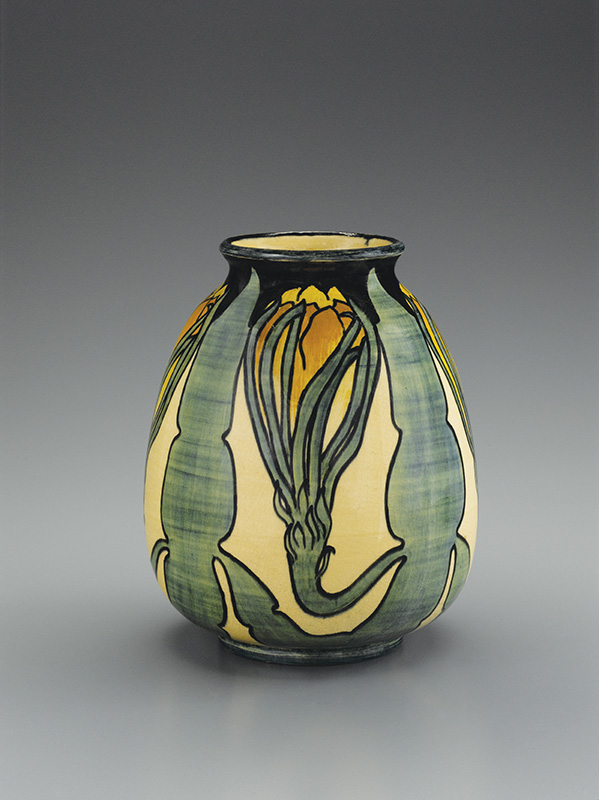 Fifty-one years ago, this publication introduced many readers to the Newcomb Pottery in a short article based on what had been learned to that date about the first decades at the New Orleans ceramics enterprise founded in 1895.1 The essay presented information and recollections by various historians and interested laypersons, many associated with Tulane University, about the pottery produced at H. Sophie Newcomb Memorial College. Illustrations included an odd assortment of works from a few museums and private collections known to the author. Developing scholarship and the flood of Newcomb ceramics that came to the market over the past half-century occasion an assessment of what we have learned and which objects stand out as the most exceptional.

Various exhibitions and publications—based on sustained scholarship by Jessie Poesch and Sally Main at the Newcomb Art Gallery and later discoveries by Alice Cooney Frelinghuysen, Martin Eidelberg, and Adrienne Spinozzi—have laid a solid groundwork for questions of aesthetic goals and artistic successes. Brainchild of arts professor William Woodward (1859–1939), Newcomb Pottery was immediately dominated by women, starting with its first educator, the gifted decorator Mary Given Sheerer.Men performed the physically demanding work—such as working with clay and throwing vases at the potter’s wheel—but it seems that Sheerer may well have thrown a bowl around 1897 (Fig. 2).2 Though the vessel had fallen slightly in the kiln and sustained a firing crack, she decorated it anyway with abstracted cross-sectional plant imagery evocative of the botanical graphics of William Morris, as well as Victorian fretwork and the whiplash curves that would come to define the art nouveau style.

From early experiments with this type of ornament through its display at the Pan-American Exposition in Buffalo in 1901, Newcomb Pottery surveyed a range of motifs, from conventionalized to naturalistic patterns. A vase featuring the mysterious night-blooming cereus strikes a perfect balance between the two styles, presenting a subtly thrown shape, intricately rendered design, and complex palette, from nearly-black indigo to watery blue-green and brilliant yellow for the buds (Fig. 1). This vase, designed and decorated by Roberta Beverly Kennon, was marked on its base with an “X,” indicating that it was to be kept for the modeler or the art department collection. It was illustrated in Gustav Stickley’s Craftsman in December 1902 (Fig. 5).

Connections to the American arts and crafts movement through the Craftsman and participation in the Pan-American Exposition—where furniture makers Stickley and Charles Rohlfs also had prominent displays—may have led Newcomb designers to the ultimate symbol of this movement: the oak tree. Quarter-sawn oak was the standard material for arts and crafts furniture. Leona Fisher Nicholson brilliantly wielded a three-part pattern to ensure that her vase always presents either the oak tree boldly facing front or the sheltered place under the canopy between two trees (Fig. 3).3 The oak tree vase combines a confident form with a perfectly unified design and intrepidly tooled, deeply carved surfaces. The oaks are rendered with absolute clarity and glazed in contrast to the bone-white recesses with some of the most perfectly fired and deeply suffused indigo ever achieved at Newcomb.4

Newcomb Pottery made vases with animal, rather than vegetative, motifs for only about one year, circa 1902. Without question, the most successful of these designs is a tall vase encircled with marsh birds standing amid bamboo (Fig. 4). The vase vividly portrays the gallinule, common in the South, especially in details such as its long thin legs and toes and small heads. This tour de force of exquisite modeling and rich suffusion of color was oddly not the one chosen for illustration in Dekorative Kunst in March 1903, which also showed a vase with marsh birds, probably gallinules (Fig. 6). That version, also by Marie de Hoa LeBlanc, and of nearly identical shape, features four birds, radically compressed to a horizontal frieze, where they stalk through the water, alert and predatory (Fig. 5).

Floral imagery is the single most dominant decorative motif on Newcomb pottery from the period of its founding through 1910, and one vase clearly stands above all others in this category (Fig. 8). LeBlanc’s tall, delicately thrown vessel embellished with clematis is a high-water mark for Newcomb’s attempts at perfect integration of geometric and naturalistic elements and seamless unity of shape and ornamentation. At the foot, watery but rich deep blue underglaze pools, with subtle green fields above forming the ground for stems to rise through leaves to two rows of vivid indigo blossoms at the top. Among the rarest colors on early Newcomb vases, yellow is seen in the meticulously carved carpels and stamens both in the primary upper row of blossoms and peeking through in the lower offset blossoms behind, as well as in a kind of horizon above. The sophisticated layering of stems and lattice, two rows of flowers, and multiple bands of contrasting colors at top and bottom yield a complex of perfectly controlled carved and glazed imagery against a subtle buff ground. Much more than the sum of its parts, this vase is a sublime masterwork in which characteristics play off and enhance one another, challenging the viewer to resolve the density of design and to revel in the perfection of ideally fused aspects of form, line, pattern, and color.

Among serving ware, a fascinating pitcher by Harriet Coulter Joor, decorated with a vegetative motif representing unopened hops blossoms or artichokes, was featured as the frontispiece for the 1904 publication How to Make Pottery by Mary White (Fig. 7).5 Other exceptional floral vases have surfaced over time, including a most unusual hyacinth vase by Joor (Fig. 12). The shape is an upside-down reinterpretation of a Chinese form, split into color fields of robust green leaves and indigo blossoms. A later version of this shape was embellished with geraniums by Mazie Teresa Ryan (Fig. 10). This superb vase rises from a slightly taller foot to a semi-conventionalized skirt of green leaves arranged in two rows against a brilliant field of blue. Blossoms arise on tall narrow stems, with petals enmeshed in a riot of decorative bands, including a collar of vertical tooling known on very few examples. For covered vessels, nothing compares to another Joor masterpiece, a marvelous lidded jar with stylized daisies, which is so graphic as to invite comparison with pop art (Fig. 11).6

Vases from Newcomb Pottery finished with a copper reduction glaze in a complex iridescent red were very hard to fire and are exceedingly rare. One remarkable example with conventionalized blue crab decoration by Mary Williams Butler is perfectly executed with a deep rich crimson color that thinned just enough in firing to clearly convey the complex carving in the clay (Fig. 13).

Around 1910 Newcomb’s predominant motifs changed to landscape imagery. Early examples of this transition were rendered with the same colors and high-glaze finish that had been characteristic of the pottery’s vases for more than a decade, but soon the palette shifted to the softer, creamier glazes of the famous moon-and-moss period that lasted until the pottery closed in 1940. One exceptional early landscape is rendered on an upside-down bell-shaped bowl, with imagery arising from a series of colored bands to a ground of deeply saturated indigo holding the roots to trees rising above (Fig. 14). Bright ocher-yellow glaze bursts through the grove’s canopy, shading to white at the top, where the clay rolls back inward and is capped with a striking blue rim. This bowl embodies the hot, humid bayous surrounding New Orleans, where around 1900 some of America’s greatest achievements in ceramics were created.

1 Robert W. Blasberg, “Newcomb Pottery,” The Magazine ANTIQUES, July 1968, pp. 73–77. 2 The base bears Sheerer’s scraped initials and the  pottery’s N-in-C cipher but has no indication of a potter or clay type. 3 Nicholson’s colleague Harriet Coulter Joor used a closely related motif for her China Tree table scarf, in linen, 1907. This pattern number 918 was created by Stickley’s craftsman needlework department. For reference, see Kevin W. Tucker, Gustav Stickley and the American Arts and Crafts Movement (Dallas and New Haven: Dallas Museum of Art and Yale University Press, 2010), p. 203. 4 Leona Nicholson experimented with a fine, closely related model that was fired just a few hundred vases before this model. That version is a less-satisfying but excellent early effort: a tall cylindrical vase, decorated with narrow tree formations repeating six times. 5 Mary White, How to Make Pottery (New York: Doubleday, Page & Company, 1904), frontispiece. 6 As with other examples of decorators trading motifs, Marie de Hoa LeBlanc was known to have used a closely related daisy motif on a vase that has been exhibited for many years at the Carnegie Museum of Art, Pittsburgh.

Joseph Cunningham is curatorial director of the Leeds Art Foundation.