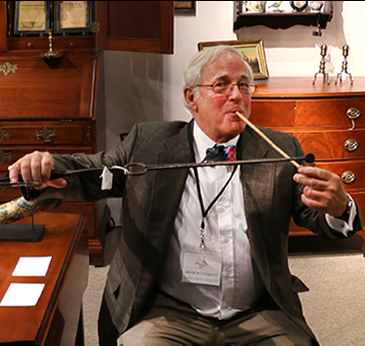 The Delaware Antiques Show, celebrating its fifty-sixth anniversary, is in full swing at the Chase Center on the Riverfront in Wilmington, Delaware, where it runs through Sunday. We at ANTIQUES wouldn’t miss it for the world, and at last night’s opening night party—while cradling Manhattans and savoring lobster bisque shooters—we caught up with a few of the sixty dealers who’ve brought their fine and decorative arts to this one-weekend-only bazaar.

“I was being taught in the womb,” says Arthur Liverant, third-generation proprietor of Nathan Liverant and Son. As a child, “my first lessons were in folding blankets, from which I graduated to polishing brass, and from that to polishing silver,” he says. With an upbringing like that, it’s no wonder Arthur ended up staying in the family business. When acquiring objects, he pays attention to quality and craftsmanship, of course, but “good design is timeless,” he says. An example of fine design in an antique object is a pair of pipe tongs, a multi-use tool of the eighteenth century. This wrought iron utensil incorporated a pin for cleaning a pipe’s bowl, a tamper, a perforated disk to help a smoker with the initial draw, and the tongs for picking up a hot coal from the fire to light the tobacco. Of the several examples in Arthur’s booth, one mid-1700s New England specimen measures more than twenty-eight inches in length. It’s the biggest pair of pipe tongs he’s ever found.

“I got my first apartment and had to put some stuff in it,” Skip Chalfant explains when asked how he got into the antiques business. His shop specializes in American furniture, decorative accessories, and fine art from the 1700s to 1900s. “The new stuff was junk. My mother said, ‘Why don’t you get antiques?’” One thing led to another, and he ended up taking a summer job with dealer Philip Bradley. He liked the work just fine, and decided to become a dealer himself. That was fifty years ago. He looks for “quality—the lines” in a good piece of furniture, as well as “what makes you happy, what makes you smile.” After finding a piece that fulfills these conditions, such as the tiger maple Pennsylvania lowboy from c. 1760–1765 in his booth at the Delaware Antiques Show, the next step is to pull it apart and make sure it’s the genuine article.

Joan Brownstein is first and foremost an artist, but art doesn’t always pay the bills. Fresh out of Cornell in 1970, “I couldn’t support myself with painting,” she recalls. When considering what to do as her “day job,” she took a cue from her parents. “They were collectors,” she explains, and “The first things I bought were a quilt, a painted nightstand, and ceramics.” Today, she specializes in New England folk art paintings of the eighteenth and early nineteenth centuries, and owns a joint shop with her husband, American furniture dealer Peter Eaton. Minutiae matter to Brownstein. She called attention to an 1817 watercolor portrait by Rufus Porter, the New England artist who was also the founder of Scientific American, in her booth. “The handling of the ear canal and the highlight in the eye are very consistent in his work,” she says, explaining that some details aren’t worth changing from sitter to sitter.

Jim Glazer’s early interest in antiques came via his wife. Nancy was a student of art history at the Barnes Foundation, and Jim took a liking to the pieces he saw there, particularly the Pennsylvania German furniture, pottery, and blanket chests. Dealing antiques just “seemed like a good way to make a living,” he says. The pair’s taste is eclectic, and their booth is full of folk art, furniture, and decorative art pieces. There are two showstoppers this year: an unusual secretary signed by I. Weber, a Meadville, Pennsylvania, cobbler, that incorporates carved patterns like those commonly found embossed on shoes, belts, and other leather goods of the era. The other: the only cupboard known that’s completely covered with polychrome tramp art carving.

Maria had the passion for antiques; Peter—an executive at PepsiCo—the funds. Her enthusiasm rubbed off on him, and after she died he took over the antiques business they’d started together, which dealt in English ceramics. These days, Maria’s and Peter’s daughter A. J. runs the show. What people gravitate to in her booth depends on what they already have an affinity for, she says. If they like creamware they may want an English teapot, such as the very small and highly collectible c. 1760–1770 unit formed like a head of cauliflower. If it’s mochaware they like, maybe the draw is c. 1790 tankard which, unusually, comes with an intact lid. Majolica fanciers might like the c. 1865 Minton ewer with classical detailing and the initials of HP Protat—Minton director and sculptor—on the handle. If people are into Chinese export porcelain, A. J. even has that: since her father died in 2014 she’s made a conscious effort to expand the scope of her gallery’s collection.

Mo Wajselfish’s father was a big businessman and a major collector in England, and Mo grew up in a house full of art, which inspired him from the time he was a small child. When his father’s artist friends dropped by, they “hailed me as a great artist,” he jokes. As a teenager, trying to make it as a musician, he started collecting: bronzes, wood carvings, and more. “Everything I buy, I buy with my heart,” he says. But his eye is good, too. Soon, acquaintances were coveting Mo’s belongings, and so he started dealing. He offers pieces as large as Craftsman furniture, alongside mini-masterpieces like a matchbox-size piece of wood carved to look like a tiny leather valise (it opens, revealing itself to be a coin purse).

Straight out of college, Spencer Gordon worked for an antiques dealer. “This is kind of interesting work,” he began to think: “Maybe we could do this.” He and Mark McHugh invested a couple thousand dollars in the idea, and over the next twenty years built their antique and modern silver business to where it is today, showing at places like the Delaware Antiques Show and the Winter Show. “We pinch ourselves sometimes,” says McHugh. Gordon pointed out an urn by English silversmith William Adams that is featured in their booth. “It’s exceptionally large and unusual, and was the type of piece that would be in Andy Warhol’s collection, as in fact this was,” he explained. “If something speaks to us visually, the next question is, does it speak to us intellectually? When you start getting those together, it gets really exciting.”