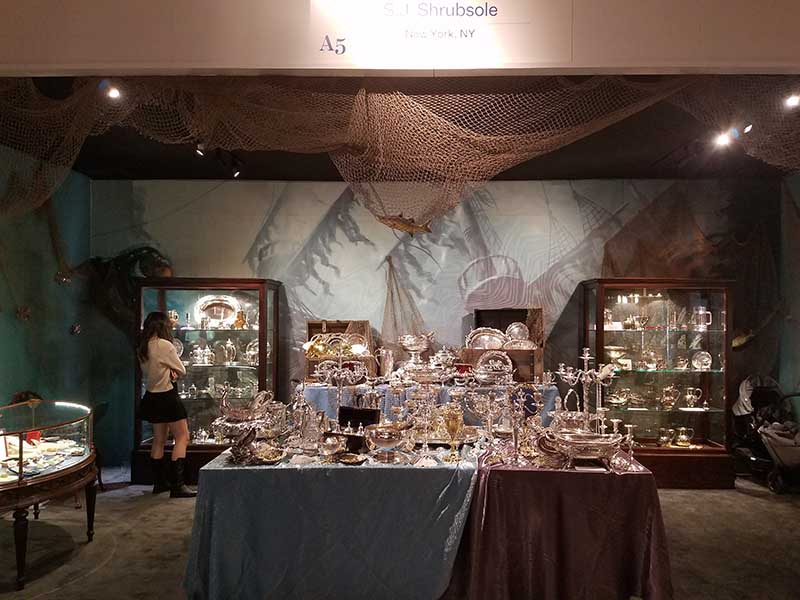 Throughout the fair, we’ll bring you selections of what’s on offer from some of our favorite galleries. Today: Boffo Booths, Part 1

Eye-catching allure is a given at the Winter Show—one of the world’s premier showcases for art and design, and open now through February 2 at the Park Avenue Armory in New York. But some exhibitors know that a little extra touch of theatricality never hurts. Here we bring you the first of two installments featuring galleries whose presentations stopped us in our tracks. Today we have a tastemaker trifecta: three booths styled by Ralph Harvard, the Virginia-born, New York–based interior designer known for his singular gentlemanly panache.

For the venerable silver dealer S. J. Shrubsole, Harvard created a maritime treasure-trove tableau, complete with fishing nets and faux doubloons and strings of pearls strewn among the sterling platters and pieces of hollowware. shrubsole.com ralphharvard.com

Highlights include a skull-shaped chalice made in 1869 in London by Alexander Macrae . . .

. . . and an English yachting trophy made in 1843 by Mortimer and Hunt and presented to a regatta winner, the third Marquis of Conyngham.

Along with a selection of her trademark portrait miniatures, the Philadelphia-based dealer is presenting paintings by New Orleans artist Andrew LaMar Hopkins, whose work channels that city’s antebellum Creole culture. The lush tropical colors of both the art and the booth are particularly energizing in the midst of a New York winter. portrait-miniatures.com

Notable works include Old Creole Days (2018) by Hopkins, depicting a street scene in the French Quarter . . .

. . . as well as an arrangement of eighteenth- and early nineteenth-century portrait miniatures.

The Levy booth is styled as a tongue-in-cheek Moving Day Sale for the esteemed early American furniture and art dealer. In a bold stroke, the New York gallery will soon change locations from its longtime home on Manhattan’s Upper East Side to the borough’s Chelsea district, where many patrons of the Whitney Museum and the area’s many contemporary art galleries will no doubt get a happy and eye-opening introduction to eighteenth- and nineteenth-century art and design. levygalleries.com

Highlights include this c. 1765 Chippendale sofa, featuring a carved skirt and ball-and-claw feet, crafted in Massachusetts . . .