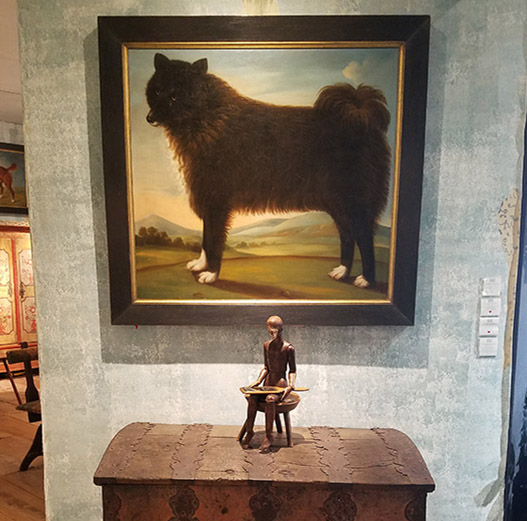 Throughout the fair, we’ll bring you selections of what’s on offer from some of our favorite galleries. Today: Bravura Booths, Part 2

The London gallery prides itself on its atmospheric style of presentation and display. An air of eccentric sophistication pervades their booth, which is full of carefully arranged vignettes of vernacular furniture and folk art that evoke the warmth of a rustic English home. It’s a beloved old cashmere sweater of a space. robertyoungantiques.com

Notable works include a finely sculpted artist’s mannequin from northern Europe, made from pine about 1850, which perches on a marriage chest beneath an oil-on-canvas portrait of a shaggy dog in a stylized landscape, c. 1830 . . .

. . . as well as a leather bombard—an old-fashioned pitcher—of about 1790, resting on a hefty sycamore butcher’s serving table among candlesticks and tankards.

The booth of the New York purveyor of art deco, mid-century modern, and contemporary design from the likes of Joseph Maria Olbrich, Émile-Jacques Ruhlmann, and Ayala Serfaty was so full of wares it almost bulges out of its allocated space. maisongerard.com

Worthy works include Titan, a monumental Honduras mahogany cabinet with rotating door by Michael Coffey, 1978 (head to our Instagram to see a video of the cabinet in action!) . . .

. . . and a group of pieces—centered on a c. 1945 vase—from the Ciboure Pottery, a Basque country workshop that imparted an art deco spin to Greek revival ceramic forms and decoration.

The folks at Hirschl & Adler conjure their usual magic, creating the sort of space you’d like to live in. Their centrally located booth is again outfitted with double height windows to give it the look of a Gilded Age parlor. There’s even a mannequin in a wedding dress at center stage, to play the resident member of the Four Hundred. hirschlandadler.com

Childe Hassam’s demure 1901 pastel A Wet Day on Broadway, painted early in the artist’s period of residence in New York, hung beside one entry . . .

. . . and the 1880 Portrait of Gertrude Vanderbilt by Raimundo de Madrazo y Garretta, which the gallery’s Eric Baumgartner called one of the artist’s finest child portraits, hangs on an external booth wall.