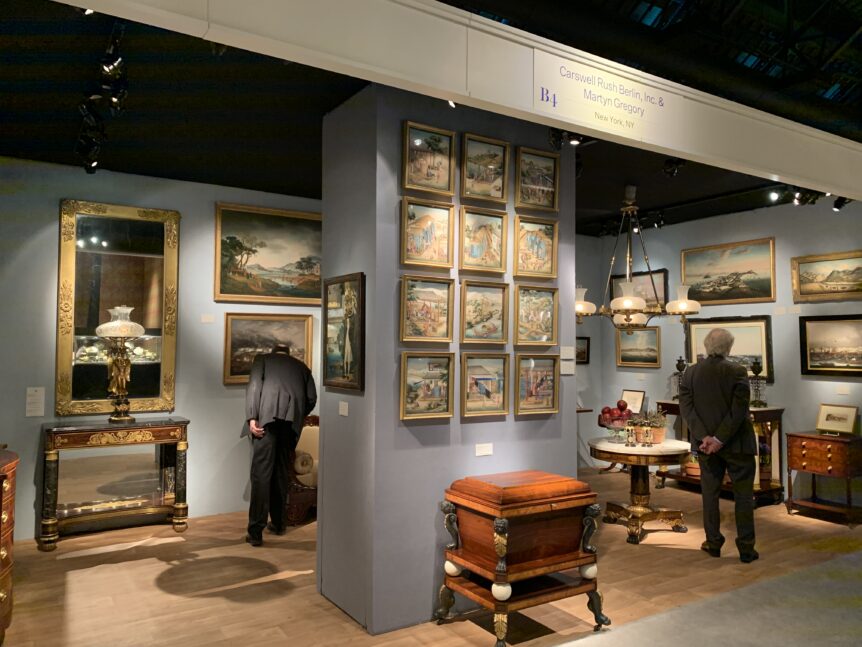 Throughout the fair, we’ll bring you selections of what’s on offer from some of our favorite galleries.

Massachusetts-based dealers Spencer Gordon and Mark McHugh have an eye for the unusual in American silver, and have placed many historical artifacts in the collections of museums that include the Met in New York and the MFA Boston.

Tiffany & Co. “Viking Punch Bowl”—made of decarbonized iron, silver, and gold–that was exhibited at the World’s Columbian Exposition in Chicago in 1893.

A pair of monumental copper-and-silver vases by Gorham that were displayed at the “Louisiana Purchase” World’s Fair held in Saint Louis in 1904.

Berlin is an authority on the high-style neoclassical furniture made in such burgeoning cosmopolitan centers as New York, Philadelphia, and Baltimore in the early decades of the eighteenth century, as the nation grew prosperous and confident in its future. Of particular note at the Winter Show are pieces attributed to the New York workshop of Duncan Phyfe.

A c. 1815 games table attributed to Duncan Phyfe. The eagle-shaped front legs and elegantly streamlined plinth mark it as the finest example of a form Phyfe had previously essayed in tables with griffin and lyre legs

. . . and this cellarette, also of c. 1815 and attributed to Phyfe, with a case that sits atop on a quartet of eye-catching marble spheres.

The Park Avenue gallery was established in 1912 and has been in the care of the same family for four generations. Silver and porcelain were the firm’s original mainstays, but since the 1970s the gallery has become well known for antique jewelry.

A pair of c. 1870 earrings with rhodolite garnet and pearls mounted on eighteen-karat gold setting with black enameling.