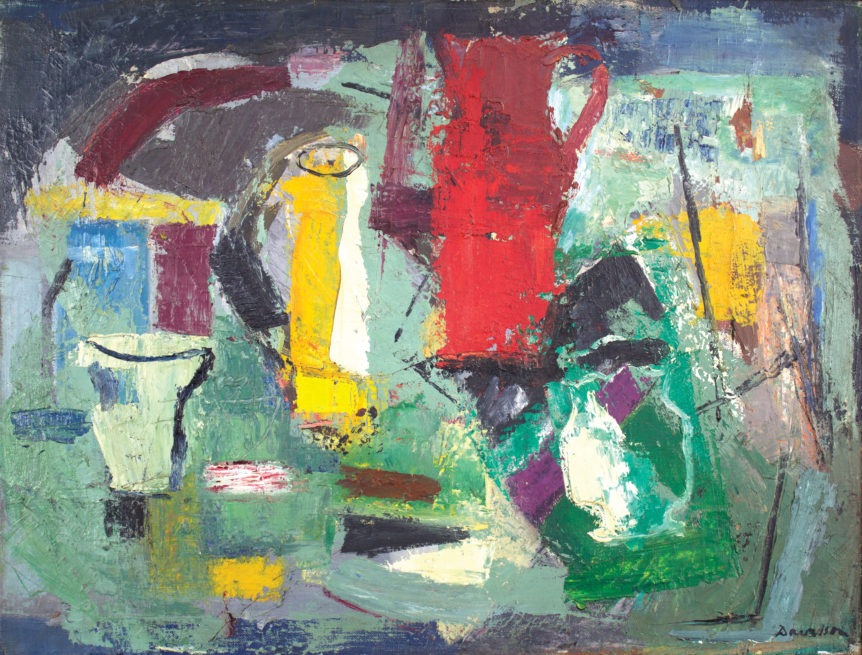 When modernism dominated art in the United States, from the interwar period onward, Morris Davidson was a prominent and widely exhibited painter—as well as a teacher, a critic, and a leader of arts organizations. And yet, since his death in 1979, his work has fallen into obscurity. A new exhibition, American Modernism at Mid-Century: The Work of Morris Davidson, at the Fine Arts Gallery at Vanderbilt University in Nashville gives the artist his due, shining a spotlight on his lengthy career, with special attention paid to his postwar works.

The student/curator–led exhibition, guided by professor Kevin Murphy, brings together twenty-two works by Davidson, and homes in on the artist’s embrace of abstraction, which shaped his art and was the focus of much of his writing and lectures from the 1930s through the 1970s. At a symposium in 1933 at the Whitney Museum of American Art—two of Davidson’s paintings were shown in that year’s inaugural Biennial—he said: “Abstraction at its best is concerned not with mere design as is commonly said, but with the poetry of plastic organization, the putting together of painting elements in a fresh and vital manner.” This perspective reveals itself in paintings such as Composition with Saw (1936): familiar objects such as a cup and newspaper, set in a dreamlike, Cubist framework—a still life abstracted.

During his time in Paris in the 1920s, Davidson encountered cubism, futurism, and other concurrent art movements, which sparked his life-long exploration of abstraction. Rejecting the subject-based storytelling of realism, he was drawn to what he described as the School of Paris’s “expression of the individual consciousness.” Back in the United States, he was a proponent for abstract painting as founder and president of the Federation of Modern Painters and Sculptors in New York City—an organization supporting artists through exhibitions, forums, and lectures—and as a leader of the Provincetown Art Association. This show, along with Murphy’s comprehensive catalogue, places Davidson deservedly back into the narrative of American modernism, illuminating his influence on artists across the country.