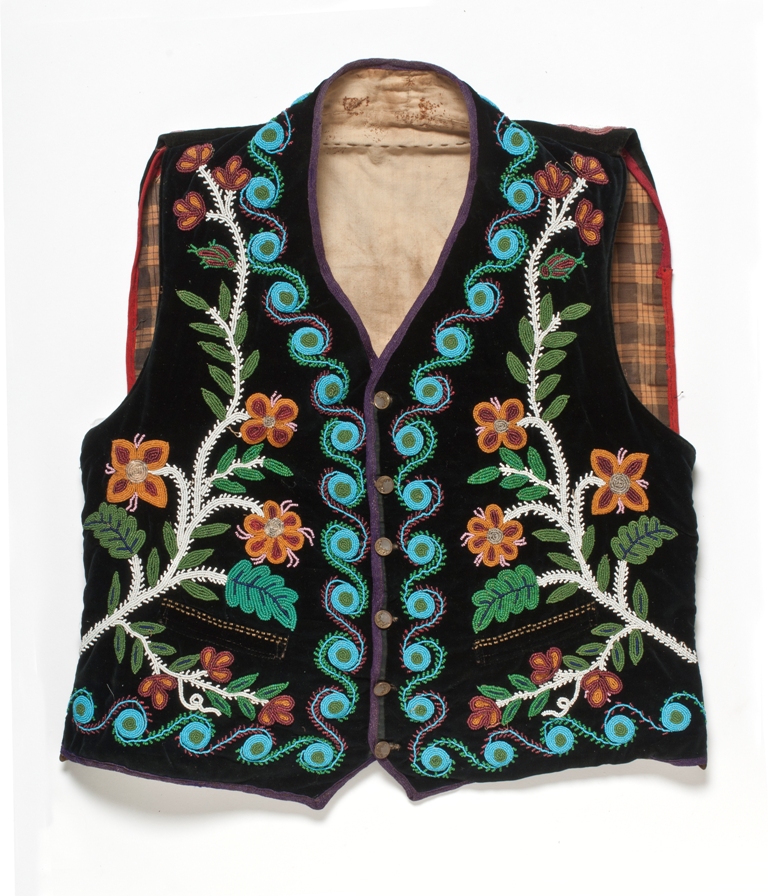 In both the academic and museum worlds, Native American and Euro-American stories have usually been told separately, presented in separate contexts, and their histories explained from their singular perspectives. But many twenty-first-century museums are beginning to move in a new direction in interpreting the history and mutual influences of the two cultures. Floral Journey: Native North American Beadwork, an exhibition at the Autry National Center in Los Angeles, tells the story of flower imagery in Native American beadwork, quillwork, and embroidery through the lens of an intermingling of histories. The exhibition, guest curated by Lois Sherr Dubin, shows how the interactions between Native communities and Euro-American settlers during the fur trade and the era of westward expansion resulted in a new art form and an intriguing means of creative exchange. Rather than showing a singular view of the history of Native floral design, it presents the stories of Euro-Americans and Native Americans in conversation with one another and provides a venue for the Native voice to shine through.

While the items are selected for their beauty and diversity, they also tell stories of the people behind them, from the unnamed women who created this detailed, intricate work-–often under devastating historical circumstances–to contemporary Native American artists who are continuing this cultural heritage. Throughout the exhibition, quotes and interviews from Native artists lend voices and fresh perspectives, and contemporary artwork is presented alongside historical counterparts to show that the beadwork tradition continues to thrive.

Floral beadwork had emerged as a dominant art form across Native North America by the late 1800s, due to the exchange of ideas, techniques, and materials between Native communities and Euro-American settlers, fur traders, and missionaries moving westward across the continent. During the heyday of ethnographic collecting, collectors and curators tended to favor geometric beadwork because it was considered more traditionally indigenous. For this reason, floral beadwork has been somewhat overlooked in museum collections. Through its assemblage of more than 250 beaded, quilled, and embroidered items-–many on view for the first time–the exhibition at the Autry has ignited renewed interest in the visual power of Native American floral artwork.

Prior to European contact, Native Americans used shell, porcupine quills, moose hair, mineral paints, and other natural materials for personal adornment. Through a network of indigenous trade routes, these items spread throughout North America. For example, shells from both the Pacific and Atlantic coasts made their way across the continent. While some natural materials such as moose hair were more localized to particular environments, others such as porcupine quills were widespread.

Traditional geometric designs transitioned into florals as the use of needles and thread allowed for the proliferation of curvilinear imagery. Native designs made their way onto Euro-American clothing styles as well. Women beaded traditional designs onto new types of clothing, such as the Ojibwe beadwork done on the man’s velvet suit vest shown below. However, Euro-Americans also made use of Native materials. For example, Ursuline nuns in Quebec taught embroidery arts–activities that they considered “civilizing”–to young Native women, exposing them to European floral patterns. In turn, the Huron taught the nuns to use moose hair as an embroidery material. The unique Huron chair panel combines a French floral design with tufted moose hair, demonstrating this creative exchange.

The arrival of European trade goods had a profound impact on Native American art. As settlers and traders moved westward, they introduced Native communities to steel needles, trade cloth, silk ribbons, and colorful glass beads. Trade beads that arrived pre-strung on hanks were much less labor-intensive to use than shells, which had to be individually cut and drilled by hand.

Plains beadwork also reveals an important connection to medicinal plants. Mint leaves and echinacea, both used for traditional healing, are but a few of the plant species that appear in Plains beadwork. The floral designs typically remain geometric and abstract, retaining pre-contact design traditions. In the pair of Lakota boots illustrated, small quill­work floral designs are intentionally placed within the more traditional geometric imagery.

Other regions incorporated recognizable plant species into their beadwork as well; for example, in the Northeast Woodlands the fiddlehead fern serves as an important design motif. Contemporary artist Niio Perkins continues this tradition through Emma, a woman’s outfit done in the traditional Mohawk style.

The idea of “civilizing” Native people through florals applied to men as well as women: by wearing flower beadwork, Native men were perceived as somewhat pacified in the eyes of settlers and government officials. Ironically, beaded buckskin jackets, often embellished with floral beadwork, also became popular with men such as General George Armstrong Custer and William “Buffalo Bill” Cody. This blend of cultural identities reveals much about Native/non-Native exchange but also suggests something about complex notions of femininity and masculinity.

The meanings inherent in some of this imagery are often opaque and open to interpretation. For example, in this photograph from about 1900, Oglala Lakota leader Red Cloud wears clothing beaded with florals but also with images of the American flag. Flag imagery is frequently found in Plains beadwork in the late 1800s, particularly among the Lakota, who were one of the tribes most affected by government suppression during the reservation era.

The convergence of Native American and Euro-American materials was not confined to the Northeast and the Plains. Beaded octopus bags are an excellent example of how widespread this exchange became. Prior to contact, Native people created bags out of the skins of fur-bearing mammals, with the four legs of the animal dangling down, to hold tobacco and medicine. The arrival of trade cloth and glass beads reshaped this indigenous form into a new artistic style.

Although their exact origin is uncertain, early beaded octopus bags from the Cree and Métis people of Canada exist from the 1840s. The style spread with the fur trade, and by the early 1870s people of the Northern Plains, Columbia River Plateau, and Pacific Northwest had adopted the form. Although beaded by women, these bags were traditionally worn by men as symbols of status. Among the Athabascan, wearing a fully beaded octopus bag signified that a man was a great hunter and able to provide for his family. The contemporary artist Glenda McKay pays tribute to the historic octopus bag in her work. She continues the tradition of blending non-Native and Native materials by using both red felt and glass beads alongside materials that are indigenous to Alaska, including sealskin, porcupine quills, and carved mammoth ivory.

Many beadwork artists today are committed to using traditional materials, including microbeads--the smallest bead sizes ever produced–that were only manufactured for a brief period from the late 1880s to the early 1920s. These tiny beads could only be strung with animal sinew as their miniscule holes were too small for a needle and thread to pass through. Artists now seek out these beads to add historical integrity to contemporary pieces.

Some trade materials are particularly resonant in certain regions: Cherokee artist Martha Berry, for example, only uses red and blue broadcloth in making her bandolier bags because those were the two colors used by her southeastern ancestors. Berry has singlehandedly revived the tradition of Cherokee beadwork, an art form lost after the devastation of the Cherokee people during the Trail of Tears. She has researched Southeast beadwork across the country in museum collections and historic photographs to teach herself the tradition and to pass it on in her community.

While contemporary artists like McKay and Berry create more traditional beadwork, working in the same methods as their ancestors, others have moved in new directions. Luiseño-Shoshone artist Jamie Okuma shows that the Native and non-Native art worlds continue to fuse today through her quillwork stiletto boots for Christian Louboutin. Her boots, along with the other items on display in the exhibition, are works of art that tell a wider story of cultural survival and cultural exchange.

PAIGE BARDOLPH, an associate curator at the Autry National Center of the American West, served as the in-house curator for Floral Journey: Native North American Beadwork.