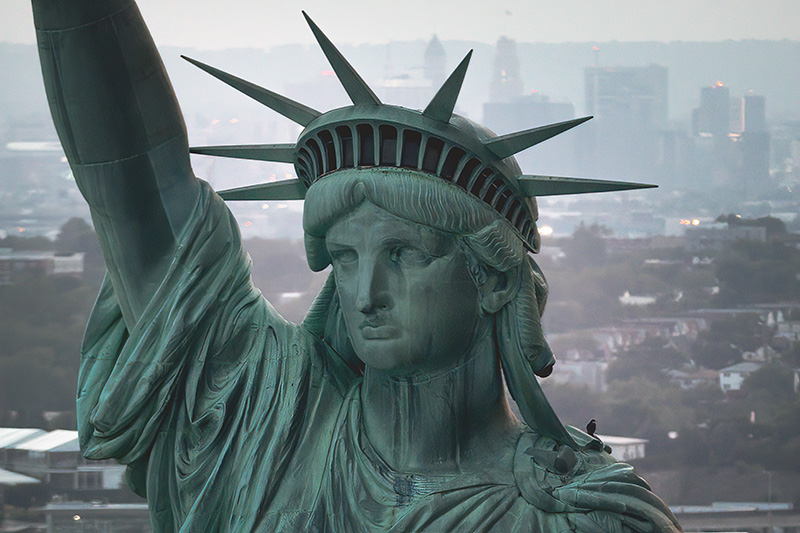 When the idea of the Statue of Liberty was first raised around 1870, many Americans found the proposal, if not exactly insane, at least idiotic. Given that Lady Liberty has become the universal symbol of New York City and of America’s most cherished ideals, it is hard to imagine the hostility, perplexity, and indifference that it initially encountered. But perhaps it shouldn’t be so difficult. Suppose that a bevy of Frenchmen showed up and announced their desire to erect the world’s tallest statue—a woman in classical attire—in the middle of the world’s busiest harbor and then asked the locals to foot a good part of the bill for the project. Some Americans with classical training might remember the Colossus of Rhodes, one of the vanished wonders of the ancient world, together with the lofty statues of Nero and Constantine that once stood in Rome. Others might recall more recent statues such as those of Arminius in Germany and San Carlo Borromeo in Italy, both about half the proposed height of Lady Liberty. But for most Americans, the proposal was a baffling waste of time and money. Furthermore, since the project appeared likely to benefit only New Yorkers, it was unclear to the denizens of the Midwest or California what it could possibly have to do with them.

Today, of course, the statue is seen as the common property of all Americans, perhaps of all people everywhere. But it is the fate of many world-famous artifacts that, through our very admiration, eventually we cease to see them at all. As with the Mona Lisa and the American flag, it is only through the strenuous exertion of our minds that we can tear away that mantle of oppressive familiarity that surrounds the statue, to find that a work of art, indeed two works of art, lie hidden beneath. The first, made of galvanized copper, one-tenth of an inch thick, is the famous 151-foot tall Lady Liberty, who, clad a l’antica, lords over New York Harbor. But she herself stands on one of the more striking examples of late nineteenth century American architecture, the 150-foot plinth designed, in a vaguely Egyptian style, by Richard Morris Hunt.

The statue was the idea primarily of two Frenchmen, the ardently republican statesman and writer Édouard Laboulaye and the sculptor Frédéric-Auguste Bartholdi. A native of Colmar in Alsace, Bartholdi was a man of boundless energy and extravagant ambition. For a monument to French valor against the Prussian invasion of 1870, Bartholdi conjured into being a lion, seventy feet long and thirty-five feet high, emerging in high relief from the living rock of Belfort, near the eastern edge of France. Another grand project, very similar to Lady Liberty and intended to celebrate the opening of the Suez Canal in 1869, consisted of a towering statue of an Egyptian woman holding a torch aloft and standing on an island at the entrance to the canal. No sooner had that project fallen through, however, than the irrepressible sculptor revised it to accommodate the specifics of New York Harbor, and then he headed for the New World to share it with the Americans.

As Bartholdi would later recall, “In the course of the voyage I formed some conception of a plan of a monument, but I can say that at the view of the harbor of New York the definite plan was first clear to my eyes. . . Yes, in this very place shall be raised the Statue of Liberty, grand as the idea which it embodies, radiant upon the two worlds!”*

Traveling the length and breadth of the country, he met such worthies as Ulysses S. Grant, Henry Wadsworth Longfellow, and even Brigham Young in Salt Lake City. More materially, he made the acquaintance of Richard Morris Hunt, the first American architect to graduate from the École des Beaux-Arts and the man who would eventually design the magnificent structure on which the statue now stands. A third man would eventually join this team and play a crucial part in its success: Gustave Eiffel. Not yet known for the tower that has borne his name since the Exposition Universelle of 1889, Eiffel designed the metal trusses that underpin the statue’s many tons of copper skin.

But although the local luminaries received Bartholdi with courtesy and words of encouragement, the question of paying for the venture bedeviled the project from its first stirrings almost to the day of its completion. Fortunately, the siting of the statue was easily resolved. Initially Bartholdi scouted a number of possible locations, among them Battery Park and even Central Park. But he was especially drawn to Bedloe’s Island in New York Harbor. It had served as the site of a fort since the first decade of the nineteenth century, when the eleven-pointed bastion proved its use against the British during the War of 1812. But by 1880 it had outlived its military functions. And because it belonged to the federal government, Bartholdi secured permission to build over the fort (whose base survives intact under the statue’s podium). Thereafter, the problem of financing the project remained paramount. Because the citizens were not initially enthusiastic, Bartholdi hoped to animate them and win backing by sending parts of the sculpture (which was completed piecemeal in France) to tour the country. Thus, while the statue’s noble head (said to be based on Bartholdi’s mother) rose up over the Champ de Mars in Paris, roughly a decade before the Eiffel Tower arrived, the disembodied arm, together with the famous torch, perplexed Philadelphians at the Centennial Exhibition of 1876, and then Manhattanites, when it moved to Madison Square Park and remained there through 1882. The money began to pour in only after Joseph Pulitzer initiated a fundraising campaign in the pages of his newspaper, the New York World, resulting in more than 120,000 individual contributions. As the statue came closer to completion, the enthusiasm for the project grew ever greater. Thus despite the rain and fog that marred the opening festivities on October 28, 1886, President Grover Cleveland led what is believed to have been the first ticker-tape parade in history from Madison Square Park down to the Battery, before a yacht bore him off to Bedloe’s Island.

Bartholdi’s statue is perhaps the fullest embodiment of the “statuemania” that defined France’s Second Empire and, due to the example of Paris, would come to define capital cities, and even secondary cities, throughout the world. No painting or poem, it was felt, could express an elevated abstraction or commemorate a glorious event quite as well as a form cast in bronze or hewn from stone. No public building, whether in Paris or London or Lower Manhattan, was tolerable to contemporary taste unless it was outfitted with a battalion of such figures, and never were sculptors in higher demand to respond to the public’s seemingly insatiable appetite. The Statue of Liberty, as the most eminent commission of the age, must stand as the embodiment of this cultural passion that defined the second half of the nineteenth century. Although the beautifully modeled folds of Liberty’s classical robes are based on innumerable ancient precedents, Bartholdi was surely inspired in part by the statue of Melpomene in the Louvre. The defiant power with which Liberty thrusts her arm upwards, however, and the visual thrill of her sevenpointed crown, are entirely unprecedented.

The logical corollary of statuemania was the imperative need to provide a suitable podium for a sculpture. Indeed, the design of these bases was a not inconsiderable part of a career in architecture, and one of the men most in demand for such a commission was Richard Morris Hunt. For most visitors to Liberty Island, as Bedloe’s Island is now known, that base, although almost as tall as the statue itself, will pass unnoticed. Unlike the burnished refinement that Hunt usually favored for his limestone structures, here he uses a humbler darker sandstone, as befits the implicit functionalism of what, typologically, is supposed to serve as a lighthouse. The rough-hewn rustication of the bulk of the structure, the simple Doric pillars, and the triangular pediments of the entrances, all confirm this posture of infrastructural utility. But no one should be fooled. This refined composition, by one of the most gifted architects of the age, was a perfect match for the statue that rises above it, one of the wonders of the modern world.