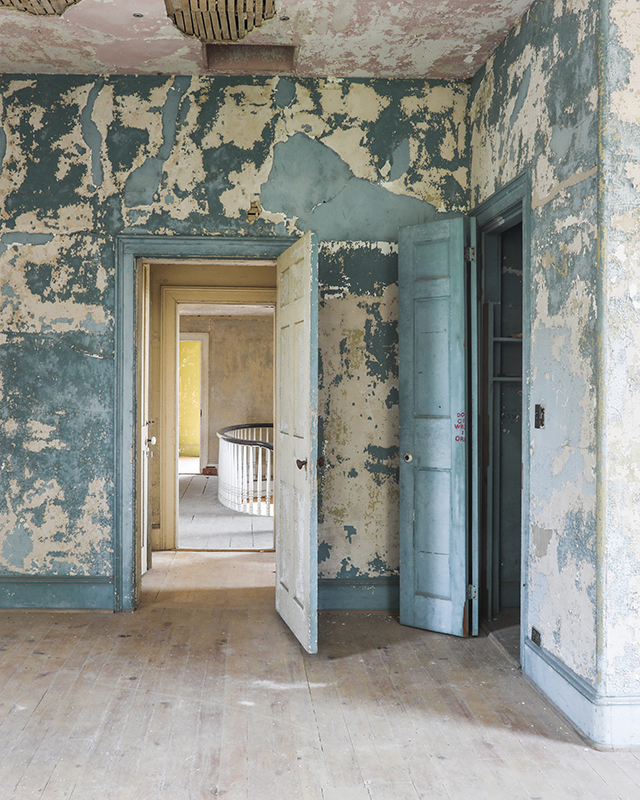 With photography by Anthony D’Argenzio for Zio & Sons 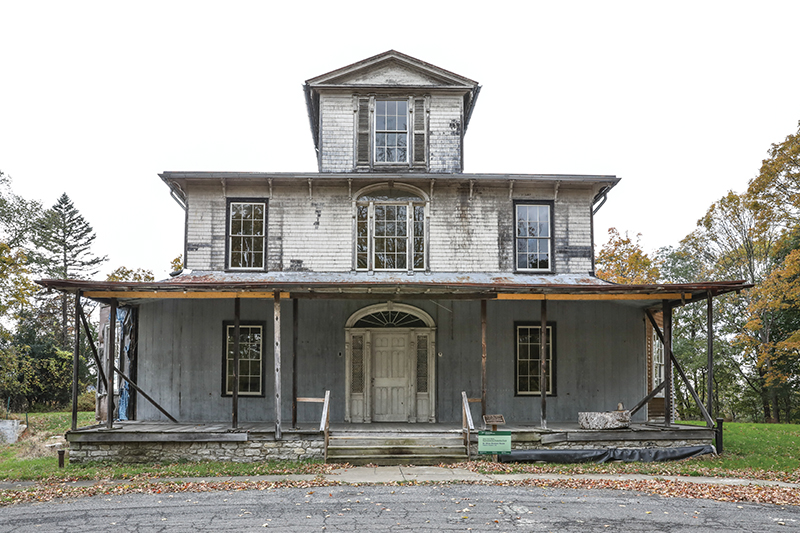 Fig. 1. The original 1812 “bones” of the Federal style Samuel Plumb house are evident in this photograph taken in 2018. Much of the ornament added by Alexander Jackson Davis (1803– 1892) in 1839 has been stripped off, along with the tall terra-cotta octagonal chimney pots. All photographs by Anthony D’Argenzio for Zio & Sons.

Hidden on the grounds of the New York State correctional facility in Hudson, New York, is an elegant villa that dates to 1812. Abandoned in 1970 when the prison took possession of the house and the land around it from the New York State Training School for Girls, the house had been the residence of the superintendent of the reformatory established in 1904. The villa was scheduled for demolition as a fire department training exercise in the early 1970s when Richard Hampton Jenrette learned of it. The famed historic preservationist had purchased Edgewater, an 1825 estate in nearby Barrytown, in 1969, and personally intervened to secure the Bronson House’s listing on the National Register of Historic Places in February 1973. He also ensured proper plywood covers and venting of the windows to mothball the architectural gem. 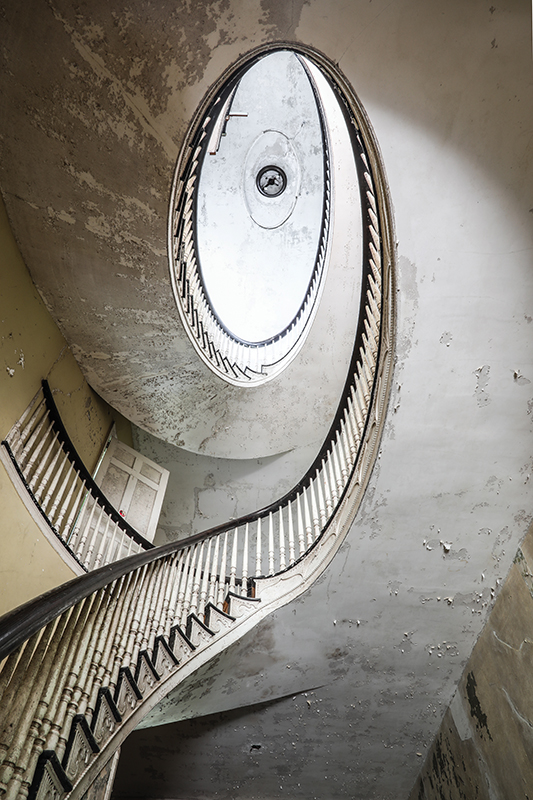 Fig. 2. A three-story elliptical stair rises in theatrical baroque fashion through the center of the house. The non-matching plaster center ellipse and round light fixture are a much later addition. Part of the restoration process will include installing a polished plaster ceiling. Above is a detail of the staircase ornamentation.

Historic Hudson, Inc., a local volunteer preservation group founded in 1996, gained access to it and advocated for preserving the building. They obtained the listing in 2003 as a National Historic Landmark, along with fifty-five acres of the historic landscape surrounding it. In 2008 Historic Hudson was finally able to secure a long-term renewable lease with New York State on the house and the surrounding 1.2 acres, beginning work to “save the patient” after thirty-eight years of abandonment. Since then, with grants from individuals, foundations, and the State of New York, more than $1.2 million has gone toward exterior conservation and stabilization. It is still inaccessible to the public except when opened for special events held by Historic Hudson.

Fig. 3. The third-floor tower room is a favorite for many visitors. It was built in 1849 as a schoolroom for the three Bronson sons, who were entering their teen years. At the time, the hall would have been one open room with six large windows to ventilate the whole house and bring light down through the center stairway.

Businessman Samuel Plumb, a rope maker from Nantucket, built the villa in Hudson, a city founded in 1785 by whalers and merchants from New England who sought a secure port after suffering harassment by the British navy during the American Revolution. Plumb was among the second wave of New Englanders to settle there. He earned his fortune with an innovative use of Robert Fulton’s steamboat: operating towboats secured with his rope. A witty, decorative, carved-wood rope motif appears throughout the house, both indoors and out. 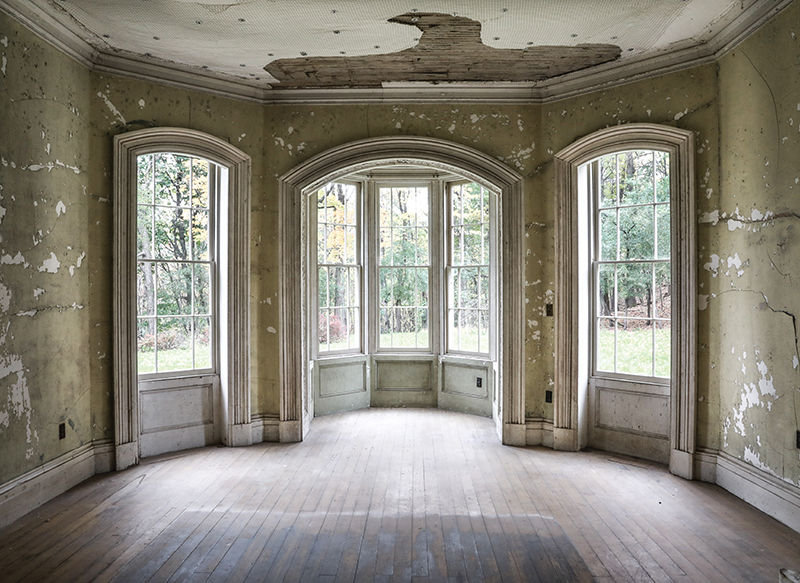 Fig. 4. This theatrical set of windows is on the north side of the triple parlor added by Davis in 1849. The angled windows mean the room is filled with streams of both early morning and late afternoon sun. The windows look out on the landscape designed by Andrew Jackson Downing (1815–1852) and almost appear to be theater draperies opening to the sylvan views. Last summer, all forty-one original windows were given new paint by the British company Farrow and Ball, who not only donated the paint but is also working with Historic Hudson on color analysis as work moves forward.

The original three-story villa was built on an open landscape in a restrained and elegant Federal style that would change when Dr. Oliver Bronson, a wealthy New Yorker, bought the property in 1838. His wife, Joanna, was the younger sister of the New York financier and arts patron Robert Donaldson, who introduced the Bronsons to architect Alexander Jackson Davis. (Donaldson would later purchase Edgewater, and enlist Davis to design its attached octagonal extension.) He also acquainted them with the young arbiter of landscape and domestic design, Andrew Jackson Downing. Archives hold a canceled check for $100 from Bronson to the Downing nurseries in Newburgh, New York, confirming an order of plant materials substantial for that era. 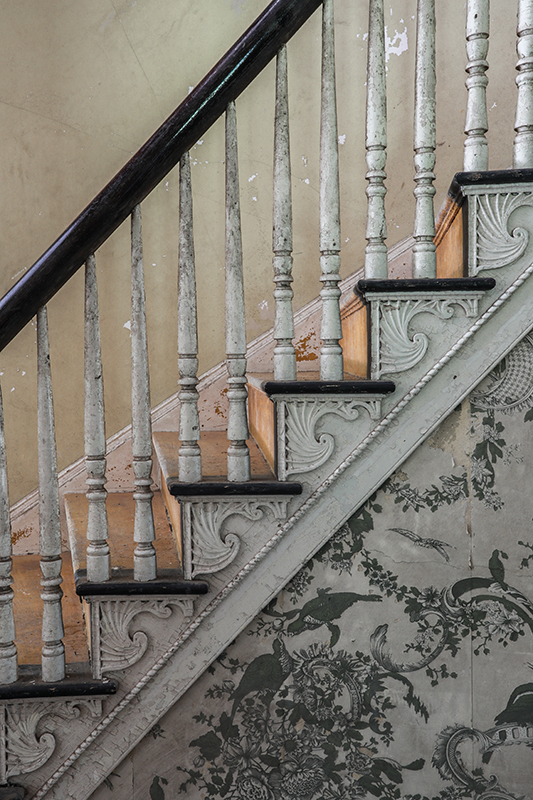 Fig. 5. The original stringers on the staircase in the front hall retain their 1812 wooden rope motif ornament. Davis continued using this rope detail, indoors and out, in his work on the house in 1849. The wallpaper throughout the house was chosen by the wife of the New York State Training School for Girls’ superintendent in 1954. The school occupied the house from 1904 to 1970.

Along with the landscape, the house was fashioned to be “picturesque.” It is the earliest known example of the style that became known as Hudson River Bracketed. The architect extended the roof and inserted decorative drop-acorn brackets beneath the eaves. On the eastern side of the house he added the veranda with ornate carved-wood details, as well as tall terra-cotta chimney pots. Davis created a subtle play of light and irregular shadows connecting the building to the newly landscaped grounds as one integrated composition. 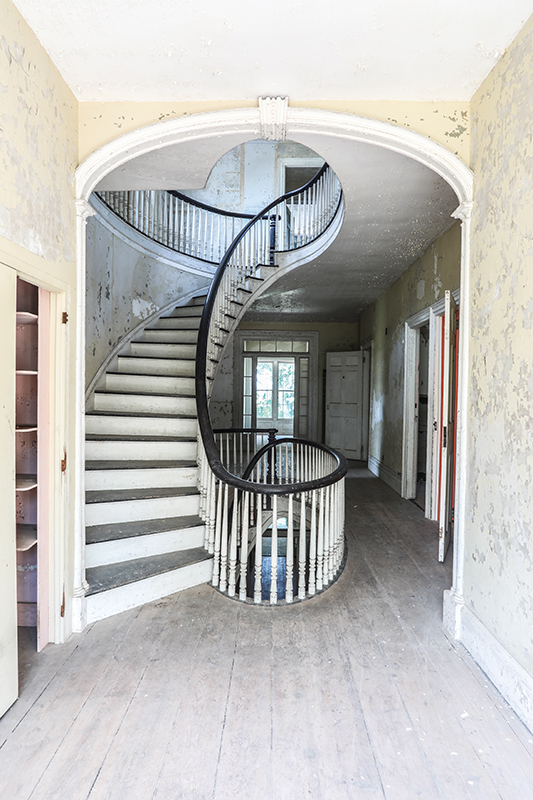 Fig. 6. The second-floor hallway has a delicately carved original arch that has been tightly hemmed in by twenty-inch-deep twentieth-century closets. The handrail, from the 1870s, is much heavier than the original; the latter will be re-created based on the elegant thin railing surviving on the very similar elliptical stair in the James Vanderpoel House in Kinderhook, New York.

The Bronsons hired Davis again in 1849 to expand the villa and further landscape it. He added a grand triple parlor suite to the western side, bedrooms on two floors, and a third-floor tower, orienting the house to the west with a large open veranda with additional drop-acorn ornament. 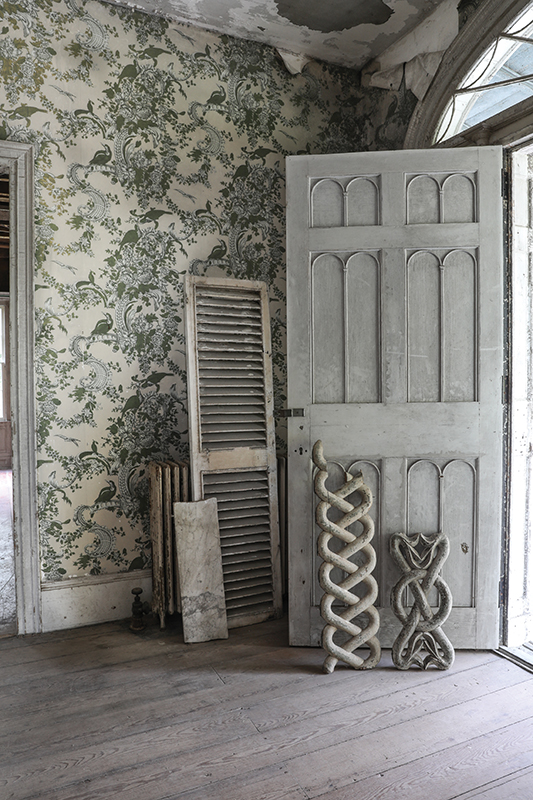 Fig. 7. The 1839 veranda will be recreated, thanks in part to the discovery and saving of some of the original ornamental carved wooden elements, including the two pieces leaning against the door in this photo. America did not yet have a cast-iron industry to produce such work, so this veranda represented the culmination of the wood carver’s art.

The Bronsons sold the property in 1853. It remained a private country seat for a succession of three owners until New York State purchased it for institutional use in 1917.

A hundred years later, the treasure once again has a future. Conservation and stabilization of the villa’s exterior is expected to be completed this summer. The 1812 basement kitchen area will be restored for use as meeting space, with modern carbon-free utilities—heat, hot water, and electricity will return for the first time in fifty years. Historic Hudson is working to make a public park of the surrounding intact nineteenth-century landscape. The city of Hudson desperately needs open green space accessible to those without cars. This includes local residents as well as visitors who travel by train to Hudson, Amtrak’s third busiest station in New York State. This local community is hard at work to preserve an asset of great beauty and national importance. 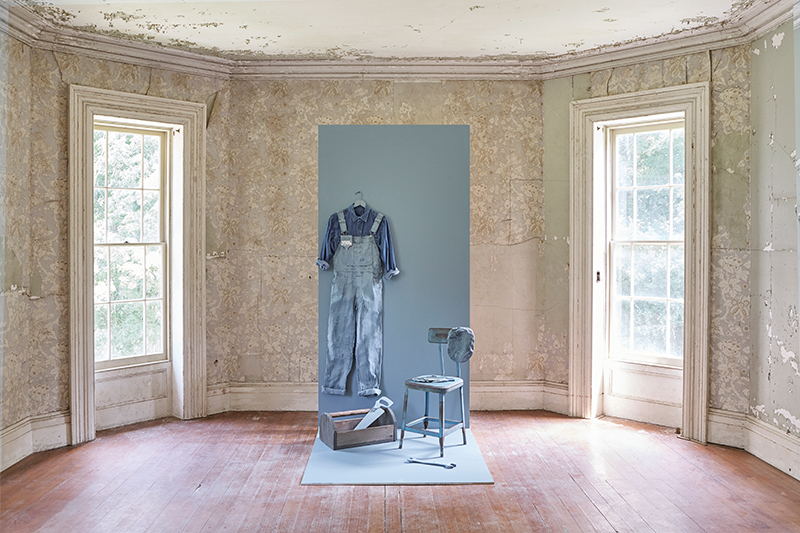 Fig. 8. Farrow and Ball launched nine new paint colors and displayed each in a room at the Bronson House, styled by Zio and Sons. Pictured here is De Nimes, inspired by the everyday workwear made in the French city of Nîmes.

ALAN GRAY NEUMANN is the president of Historic Hudson. 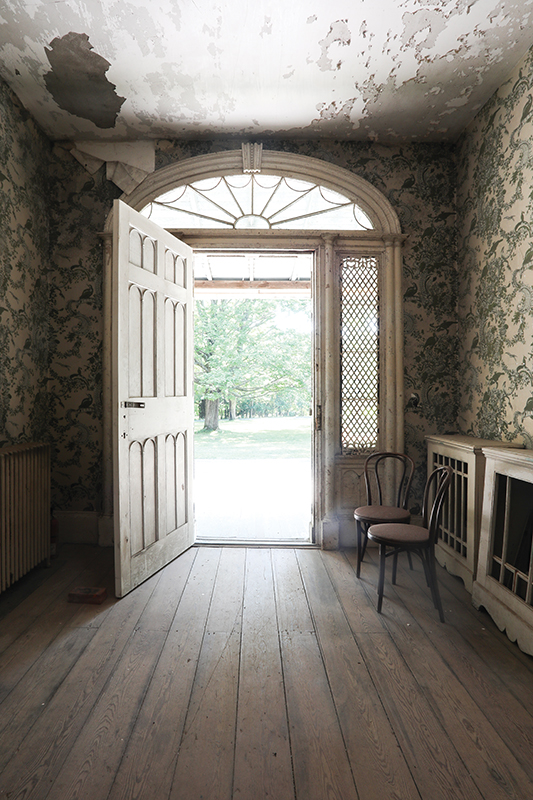 Fig. 9. Davis added a layer of picturesque ornament on the 1812 exterior, including giving the six-panel front door added detail. The original door frame and fanlight remain intact; the sidelight grilles were added in the 1870s.