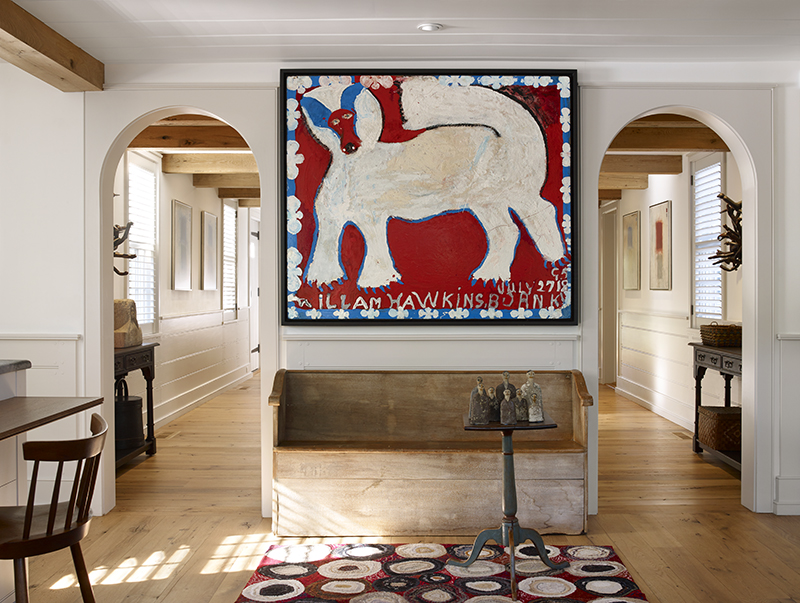 At a time when art seems to be viewed by many collectors primarily as an investment instrument—purchased by proxy at auction and quickly whisked to a freeport storage facility in Geneva or Singapore, never to be seen and appreciated until the next time it goes up for sale—it is refreshing to learn about someone who collected for the joy it brought him.

By all accounts, the late Larry Dumont experienced a sort of rapture when he encountered a work of art he admired and desired. “He was one of the smartest and most interesting people I ever met,” says Frank Maresca, principal of the New York art gallery Ricco/Maresca. “But if I had to point to one extra special thing about Larry it was his enthusiasm. When something captured his deep interest, his enthusiasm was that of a four-year-old with an ice cream cone—absolutely unbridled. He’d light up like a thousand-watt bulb. And he’d start to stutter, as if he couldn’t express his enthusiasm fast enough.”

Dumont was interested in many subjects and collected widely, but principally folk and self-taught and outsider art, along with contemporary work. On these pages you see part of his collection as it was arrayed in the house in the town of Sag Harbor on the east end of Long Island that he shared with his partner, Martin Gould. After Dumont died unexpectedly in 2018, much of the collection was dispersed, the most noteworthy pieces sold at auction. These photographs remain as a testament to a singular collecting eye.

If there was a characteristic common to all the art that appealed to Dumont it was quirkiness, says Patrick Bell, co-owner of Olde Hope Antiques, an elegant gallery in Bucks County, Pennsylvania, that specializes in folk art. “Larry was attracted to the imperfect,” Bell says. “By that I mean something that isn’t classically straightforward and pristine. He liked the unusual—even a repair that was unusual. Something not expected.”

Take, for an example of the delightfully defective, a small painted side table with a base made from a slender dogwood tree trunk and its roots. One of the roots is too short to touch the floor, making it appear as if the table is about to walk out the door (Fig. 9). As for the unexpected, there were no better examples of that in Dumont’s collection than a pair of wall-mounted carvings made from the knotted roots of rhododendron bushes. Several of the root tips have been whittled into the shapes of animals—an owl, storks, a parrot, snakes, and what might be a dog (Fig. 2).

Dumont was by profession a child psychiatrist, and thus sensitive to the wrinkles in the fabric of the human condition. As well, he had been diagnosed with Asperger’s syndrome, a disorder at the milder end of the autism spectrum. It seems reasonable to believe that both facts influenced his approach to art. “Larry’s feelings about himself being flawed translated into that, I think,” says Bell. Particularly so when it came to self-taught and outsider art. “Artists living on the fringe; hanging on by a thread. Larry appreciated that. He understood it in a way other people might not. He took it very personally.”

That genre of art is known by many names: intuitive art, art brut, visionary art, naïve art. Maresca, who deals in that field, has definitions that offer useful refinements. “Self-taught art is made by non-art historical artists. They did not go to art school; they are people whose process owes very little to art history,” he says. “Outsider art is work produced by artists working so far outside of society as we know it that they needed caregivers.” Dumont had prominent works in his collection representing artists of each of those types.

Of self-taught artists, Dumont’s collection included works by Sister Gertrude Morgan, Howard Finster, Clementine Hunter, and the sculptor William Edmondson. Perhaps the most noteworthy work of self-taught art that was on display in Sag Harbor was White Dog by William Hawkins, a composition in enamels, cornmeal, and collaged paper on a four-by-five-foot panel of Masonite (Fig. 5). One of the most admired African-American self-taught artists of the last century, Hawkins was born in Kentucky on July 27, 1895—facts he recorded in his signature on most of his paintings. He moved to Columbus, Ohio, in 1916—by one account, to avoid a shotgun wedding—served in the US Army during World War I and later worked variously as a truck driver, numbers runner, and horse breaker. Hawkins began making art in the 1930s, but only dedicated himself seriously to the pursuit in the late 1970s, developing a colorful, expressive style for depictions of such subjects as local landmarks—like the Ohio State University football stadium—and fantastical animals such as his white dog.

At the Sag Harbor house, Dumont kept works by two particularly fascinating outsider artists. One is Judith Scott, a sculptor who was the subject of a retrospective that opened in 2014 at the Brooklyn Museum. Scott, who died in 2005 at age sixty-two, was deaf and had Down’s syndrome. She created complex, fastidiously woven mixed-medium pieces made of found objects and yarn, string, fabric swatches, or just about anything that could be wound, wrapped, or bundled (Fig. 6).

The other is Martín Ramírez, one of the seminal figures in the world of outsider art. Born in 1895, Ramírez left his native Jalisco, Mexico, at age thirty to find a job in the United States. Barely able to speak English, he worked for the railroads and in mines in northern California, but became a drifter during the Great Depression. Ramírez was arrested in 1931, reportedly in a disorientated state, and while in police custody was diagnosed as manic-depressive and sent to a mental hospital. Later diagnosed with schizophrenia, Ramírez would spend the rest of his life in state psychiatric facilities. He began drawing on scraps of paper, and in the early 1950s a professor of psychology named Tarmo Pasto, an artist himself, was visiting the hospital wards and saw Ramírez’s work. He arranged for Ramírez to have supplies of proper artistic materials, ensured that his drawings were kept safe, and would also organize exhibitions of his work. Ramírez developed a striking and singular style in which he used angled and curved lines to form a kind of theater-like frame for a repertoire of motifs that included riders on horseback, locomotives, deer, and the Virgin Mary (Fig. 3). Among outsider artists, Ramírez’s art stands as among the most affecting and instantly recognizable.

While acquiring art is one talent, displaying it is another—and the skill it takes to do so is an underappreciated art in itself. The tableaux you see on these pages are the work of interior designer David Guilmet, a partner with Patrick Bell in the firm Bell-Guilmet Associates. Beyond a brief to update the house, furnish it, and select and array pieces from the art collection, Guilmet was given no instructions by Dumont and Gould. They insisted on being kept in the dark regarding the designer’s plans. They wanted to be surprised—a prospect Guilmet found, he says, “petrifying.”

Guilmet decided that his objective would be to make the house “look lived in, without having been lived in.” That is, the interior would have clean, simple, modern architectural lines, yet the rooms would have a well-worn, well-loved character and patina. The center staircase was removed and a new one built at the rear of the house, leading up from the kitchen and dining room, a move that opened up the downstairs spaces and heightened the enfilade effect between rooms. The ceiling and walls were taken down to the studs and new, thicker beams of repurposed oak were installed, along with new wainscotting and arched doorways downstairs and vertical beadboard paneling upstairs.

“Larry was a master at choosing art, and I knew he wanted a space to show his collection at its best,” Guilmet says. The designer made admirable juxtapositions of art, furniture, and architecture: pairing the Hawkins with a nineteenth-century Nantucket bench; the Ramírez with eighteenth-century Windsor chairs and a tavern table from the same period; and installing a thrusting architectural eagle above the fireplace, which he flanked with an Indian princess trade figure and a mounted early-eighteenth-century broom. The effect is warm and charming and Dumont and Gould, Guilmet says, were “beyond thrilled.” How could they have been otherwise?