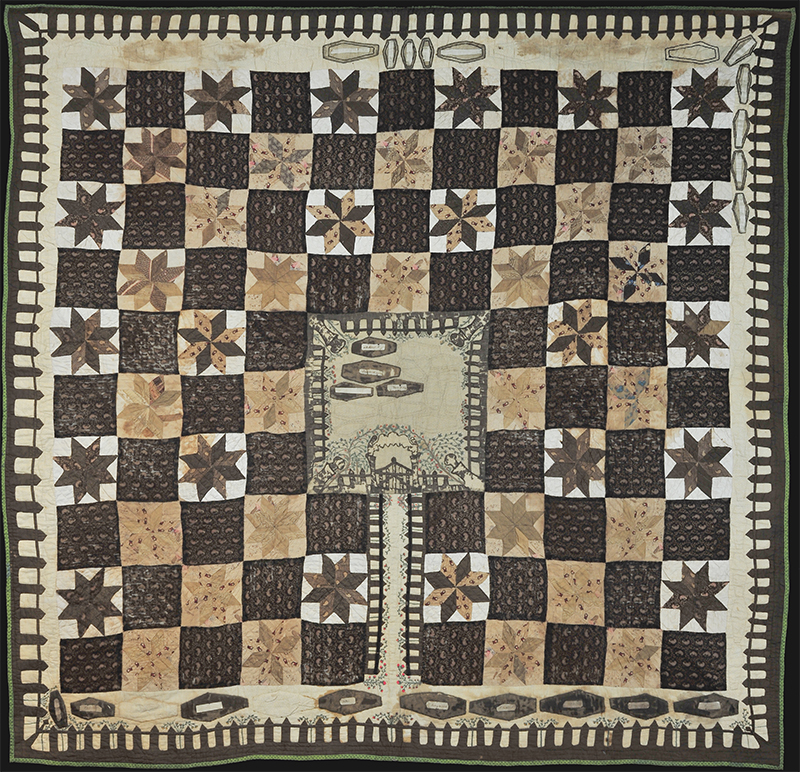 Stitches of Sorrow – The Graveyard Quilt

Perhaps more than any other folk art form, quilting embodies diversity in its history. While enslaved women would help their mistresses make quilts, following traditions handed down from European grandmothers, they would also craft quilts for their own families. Integrating designs passed down from their own ancestors, African American women comingled decorative European or frontier styling with their own cultural and artistic influences. Their works reflected African traditions known for colorful fabrics, and boldly exhibited the perennial drive toward human self-expression.

The quilt shown here is well-known among students and collectors of these early American textiles, dating to 1843 and crafted in Lewis County in northeastern Kentucky, near the Ohio River town of Vanceburg. It would be considered a “mourning quilt” and was made by Elizabeth Roseberry Mitchell and her daughters, Elizabeth and Sarah. This artistic quilt records life and death in the Mitchell family, and is recognized as a work in progress that changed over many years.

Spectacular in a folksy way, it has been nicknamed the “Graveyard Quilt,” depicting a cemetery at its center, surrounded with a picket fence. The elaborately embroidered cemetery entrance is decorated on either side with a trellis of climbing roses that arch above a fancy gateway, and large sculpted columns at each corner of the cemetery. A fenced walkway, also bordered with vines and roses, leads to the outside edge of the quilt.

The quilt top is cotton, adorned with patches of eight-pointed stars arranged in an alternating pattern against dark brown blocks of calico. Surrounding the outside border of the quilt is another picket fence around a number of appliquéd coffins, each labeled with a family member’s name. Elizabeth’s coffin is labeled “Mother,” and was originally located at the lower left of the quilt. At her death in 1857, her coffin was lifted and re-stitched into the central graveyard. As the years progressed, other family members were added to the quilt. As each died, the year was added to their coffin, and it was moved into the central graveyard.

It is apparent that daughter Sarah continued to alter and update the quilt after her mother’s death, recording the family’s history until the early 1870s. While Sarah lived until 1911, her alterations ceased sometime before her father’s death in 1875. The quilt remained a cherished Mitchell family heirloom, descending to Nina Mitchell Biggs. For the sake of posterity, she donated the Graveyard Quilt to the Kentucky Historical Society in 1959, where it remains preserved at the Thomas D. Clark Center for Kentucky History.

Cherished memories and hints of historic family culture are chronicled in the artistic designs of many iconic Bluegrass quilts. The Graveyard Quilt illustrates the love that Elizabeth Mitchell had for family, and the function of these artistic textiles in recording a family’s history and genealogy. In depicting family births, deaths, and marriages, this utilitarian art form conveyed decades of emotion that were expressed thoughtfully and carefully—stitch by stitch.

A Limner in the Bluegrass

As early as 1980, examples of portraiture rendered by a prolific but unnamed watercolor artist began to surface in North Carolina and around the Bluegrass. The majority of this itinerant artist’s work was rendered between 1826 and 1828 in Guilford County, North Carolina, where at least fifty of his unsigned but distinctive portraits have been identified. Collectors thus began referring to the unnamed painter as the “Guilford Limner.” While many of the painter’s subjects were from North Carolina, the earliest of his works, dating between 1818 and 1826, are of subjects who lived in the Bluegrass region of Kentucky.

By 1983, about thirty-five examples of the Guilford Limner’s work were known, and several of those portraits were exhibited at North Carolina’s Greensboro History Museum. To accompany that exhibition, Karen Cobb Carroll authored a catalogue entitled Windows to the Past, where she described the limner as “an itinerant, an independent journeyman who plied his trade wherever and for as long as support lasted. He saw himself as a craftsman rather than an artist, and rarely signed his work.”

In May 2010, four Guilford Limner paintings were featured on the PBS television program Antiques Roadshow. A guest brought in family portraits for appraisal: heirloom paintings depicting four of her ancestors. Appraiser Ken Farmer assessed the value of the four paintings at a handsome $60,000. Soon after, the guest loaned them to the Museum of Early Southern Decorative Arts (MESDA), where they were placed on exhibit. After the PBS program publicized the high value of the work from this unidentified southern folk artist, many more of his portraits began to surface.

In his works dating from 1818 to 1833, the Guilford Limner’s watercolors are usually painted on heavy, high-quality woven paper, and range in size from 5 x 7 inches to slightly larger than 11 x 18 inches. Skillfully executed, the artist paints the faces of each subject with delicate detail that shows the sitter with large bright eyes, his fine brushstrokes depicting even the subject’s eyelashes.

Each painting shows the subject engaged in the activities of life, often writing, knitting, or holding a book or handkerchief. Small accessories are commonly shown, with both women and men adorned with their jewelry, gloves, eyeglasses, or swords. Colorful clothing is the norm, while usually painted with less detail. The brightly colored settings are often busy with marbleized woodwork, painted chairs, and candle stands or small tables that might hold a vase with a bouquet of flowers. Vines, branches, or tall flowers often flank the background.

Many of the Guilford Limner’s paintings are inscribed with the subject’s name and the date. These details provide legitimate provenance as the paintings descend within families, and help to verify the location of the artist at a specific time. Twenty-one of the Guilford Limner’s works show members of Kentucky families who hail from Breckenridge, Clark, Bourbon, Scott, Green, Washington, Lincoln, and Franklin Counties. The Kentucky paintings are the earliest of the Limner’s work, and date from 1818 to 1825. The stylistic consistency and dating provide evidence that the Guilford Limner worked for at least seven years in the Bluegrass before removing to North Carolina around 1826.

Noted historian Sally Gant, now retired from MESDA, has a passion for this still-unnamed artist and has researched “him or her” for many years. As of December 2019, she has identified eighty-six of his paintings and is working on a publication that will report her in-depth study. Sally generously shared her research about the Limner’s years in the Bluegrass, concluding: “[The Guilford Limner’s] Kentucky works demonstrate a marked evolution in technique and composition over these years, an obvious evolution in style and format. It is quite possible that he trained as a miniaturist while there.”

Never before published, the three earliest known portraits by the Guilford Limner are shown here, each painted in an oval surround, which has been recognized as an early trait of his work. The portraits of husband and wife are labeled Joseph E. Hardaway and Polly Hardaway (married in 1811 in Breckinridge County, Kentucky), with Polly’s portrait dated 1818.

The unlabeled painting of the seated gentlemen is dated 1818 (in pencil on the reverse), and was most likely rendered near Lexington, Kentucky. This geographical attribution is family provenance and is logical, as the subject is sitting in a fancy chair easily recognized to be from the Lexington shop of chairmaker William Challen.

Learning to become proficient with needle and thread was an important part of a young girl’s upbringing in the eighteenth and nineteenth centuries. Creating a sampler was an artistic way for an eight-year-old girl like Mary Ann Wade to showcase her skills. The third child of Jeremiah and Sarah Alexander Wade, Mary Ann was born in Cumberland County, Kentucky, on December 27th, 1827.

Her vividly colored sampler is a large and impressive example of this type of frontier embroidery, measuring 16 . inches tall by 15 . inches wide. The piece is stitched with silk thread on linen fabric, and Mary Ann demonstrated her skills by embroidering two rows of alphabet letters and numbers, followed by the stitched initials of each of her siblings. Horizontal bands of decorative needlework separate these motifs from a central verse taken from an eighteenth-century children’s hymn:

Be thou my Guide be thou my Way

Ah! write the pardon on my heart

And whensoe’er I hence depart

Let me depart in peace

The verse is followed by other motifs including a heart, game birds, and flower baskets. Along the bottom edge, the child had stitched: “Mary Wade’s Work Aged 8 1835.”

The verse was taken from a 1763 children’s hymn titled “And Am I only Born to Die?” written by the noted Methodist cleric Charles Wesley (who wrote over six thousand hymns during his lifetime). Mary Ann’s choice to stitch these particular lines into her sampler suggests that she knew she was dying, and was offering her sampler as a cherished memory for her parents and siblings. Eight-year old Mary Ann Wade died only months after she completed her sampler, and was buried at the Wade Cemetery in Marrowbone, Kentucky.

This article is excerpted and adapted from Into the Bluegrass: Art and Artistry of Kentucky’s Historic Icons, published by American Historic Services (2020) and available through intothebluegrass.net.

MEL STEWART HANKLA is an educator who serves on the advisory board of the Museum of Early Southern Decorative Arts, among other appointments.