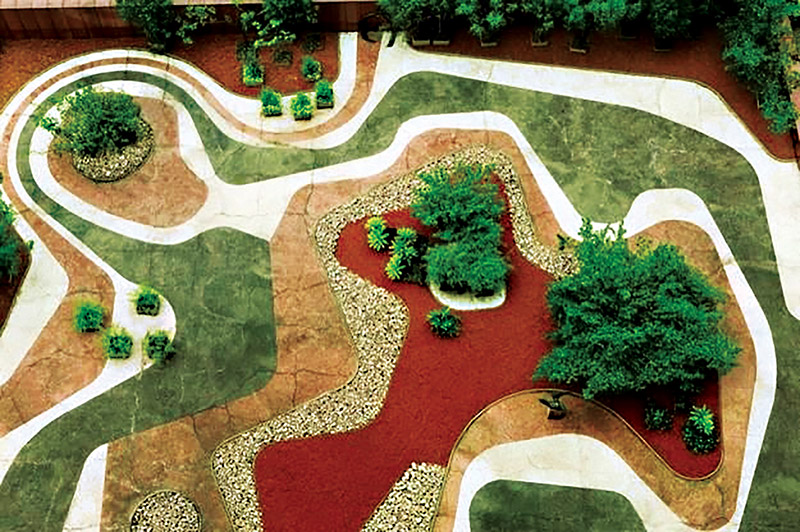 New York loves Roberto Burle Marx. In 1991 the Museum of Modern Art celebrated him as an artist who transcended his calling as a mere landscape designer (Roberto Burle Marx: The Unnatural Art of the Garden, a grotesquely misguided title). The Jewish Museum rolled him out in 2016 as Roberto Burle Marx: Brazilian Modernist, fit company for a group of contemporary sculptors, mixed-medium artists, and photographers whose work was also on display. The man was indeed a painter, a ceramist, a sculptor, a set designer, and so much more. He broke a lot of molds as he created the only one that could contain him—that of a visionary plantsman who brought all the arts to one dynamic moment in the garden. That is the Roberto Burle Marx the New York Botanical Garden is uniquely positioned to honor in The Living Art of Roberto Burle Marx, a tribute that doesn’t, so to speak, put the garden in the shade.

Although tropical plants, especially those native to his home country of Brazil, were his primary material and South America the locus of most of his three thousand gardens, Burle Marx was a citizen of the world. He spoke six languages and seems to have captivated nearly everyone who came within his sphere, as I can attest, having been at the University of Pennsylvania where his occasional presence radiated excitement far beyond students of landscape architecture. Born in 1909 to a German Jewish father who immigrated to Brazil and a Roman Catholic mother from that country’s elite, he left for Berlin at nineteen and studied painting. His transformative moment occurred one day in the greenhouse of the Berlin-Dahlem Botanical Garden, where, improbably enough, he encountered the “force” of Brazilian tropical plants for the first time. The only gardens he’d known in Brazil had been done in the spurious European style he describes as very much “in conflict with the surrounding landscape.” The Brazilian flora was a revelation, but he did not turn away from painting that day in the greenhouse. He had simply discovered that “the force of genuine tropical nature” was the material “for the plastic work that I looked to do.” What continues to inspire landscape architects as different from him as the wild and wonderful Martha Schwartz is not so much his particular style as this sense that gardens allow the artist far more versatility than paintings do.

An equally important part of the Burle Marx legacy has been his passionate advocacy for the preservation of plant life, primarily the plant life of Brazil, where he collected and preserved more than thirty-five hundred species. That is certainly part of what makes him an ideal subject for an exhibition during what the NYBG is calling its year of #plantlove. Here is a typical passage from one of his many lectures: “I have been very much preoccupied with preserving an authentic reservoir of our plant life, today more than ever threatened by destruction on a massive scale—thoughtless, swift, and irretrievable—which continues, side by side, with our demographical explosion and with the perfection of the machines which exploit our forests and which exterminate whatever gets in their way.”

If you think it was easy for him to say this, know that this was a man who lived under, and had to work with, the military dictatorship in Brazil, which was the prime mover of that country’s environmental destruction. Somehow he got away with it.

There was nothing sentimental about this plantsman’s love of nature. Civilization, he insisted, was characterized by human interference with the physical world, and the landscape architect was required to construct an artifice, which is partly why his hardscaping—his walls, pathways, and borders—is as thrilling and imaginative as his use of plants and water. There is always something paradoxically wild about his taming of the landscape.

It is unfortunate that Burle Marx’s public gardens in Brazil have not been as well preserved as his private ones, especially as he preferred public work in dense urban settings; it is equally disappointing that, except for one small installation, he did no gardens in this country. The exception is his Cascade Garden, a small tropical rainforest under glass at Longwood Gardens in Pennsylvania, where, unaccountably, the signage does not bear his name. Sharon Loving, now vice president of horticulture at Longwood, who was a gardener there in 1993, remembers the process of design and installation overseen by Burle Marx, who, she says, worked like an artist improvising, innovating, and likening the desired result to a symphony. It is a small canvas that nevertheless allows for his characteristic variations in texture, sound, movement, color, and light. (For an account of the wonders at Longwood, see Tom Christopher’s article “Tradition and innovation at Longwood Gardens” in The Magazine ANTIQUES, March/April 2012.)

The New York Botanical Garden has a far bigger canvas than Longwood for the temporary installation of three gardens inspired by Burle Marx and created by his longtime friend and protégé Raymond Jungles. For the Modernist Garden on the Conservatory Lawn, where you will be able to walk the walk of a Burle Marx garden, Jungles drew inspiration from public and private works in São Paulo, Rio de Janeiro, and Caracas, bringing together curvilinear planting beds, textured paths, and a wall carved in relief similar to one in São Paulo’s Banco Safra building. The Explorer’s Garden, an indoor installation, will celebrate Burle Marx’s many expeditions to recover plants from diverse environments: Brazil’s coast, mountains, Amazon forest, and the vast savanna known as the Cerrado. Several of his dramatic favorites will be displayed here. Jungles’s third inspiration, the Water Garden, will beckon with, among other beauties, the Tyrannosaurus Rex of the plant kingdom, the giant water lily known as Victoria amazonica, used lavishly by Burle Marx and a crowd pleaser, justifiably so.

The drama and sensual pleasures of a Burle Marx garden rest on his disciplined knowledge of botany. Because there was no tradition of native plant collection and cultivation in Brazil at the time, he both collected and cultivated many species himself. Here, too, the NYBG has gone the extra mile with an installation in the Britton Science Gallery exploring plants from Brazil’s three main biomes. The science in this display may be lost on the plant ignorant like myself, but everyone even remotely interested should read his lecture “The Plant” in the superb collection Roberto Burle Marx Lectures: Landscape as Art and Urbanism, edited by Gareth Doherty, where his gift for making effortless connections between plant life and our life is a running theme.

There will be more, a lot more, enough to finally bring this extravagant spirit into view, something earlier exhibitions could not do. His prints, paintings, plans, drawings, lithographs, tapestries, and particularly an installation re-creating the Sítio Roberto Burle Marx, his estate, where all of his passions came together in one joyous celebration, will be on display in the Library Building. There will be Brazilian music and dance. His art, curated by Edward J. Sullivan, professor of art history at New York University, will emphasize the last thirty years of his creativity, when his works were mostly abstract, but there is no corralling this man with labels, styles, or eras. He was a maximalist and a minimalist, a modernist and a historicist: “my work reflects modernity, the date on which it takes place, but never loses sight of the reasons for its own tradition.” He rejected the idea that he sought originality. On the contrary, he sought the deepest sources of creativity in the things that had come before him, especially folk art because it is so beautifully based on the observation of nature: “It is almost as if nature had anticipated the thoughts and aspirations of men. It suggests that beauty is not meaningless but fundamentally arises out of a reason for being.” Is it surprising that so many people would follow this man to the ends of the earth . . . or at least to Sítio Roberto Burle Marx?

If we need proof of Burle Marx’s insistence that gardens are a necessary artifice amidst the brutality of the present, the 250 acres set aside in the South Bronx are serving just that purpose and have for many decades.

The Living Art of Roberto Burle Marx is on view at the New York Botanical Garden from June 8 to September 29.