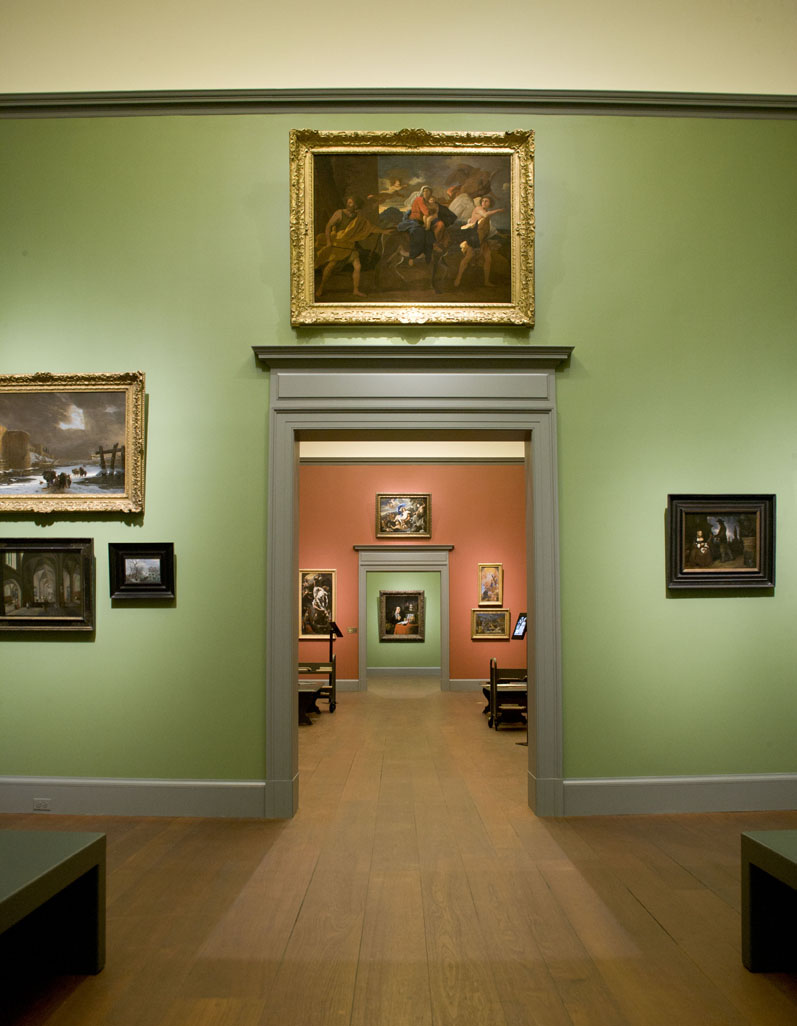 In the 1960s when manufacturing wealth melted away in Worcester, Massachusetts, as it did in so many American cities, the city’s museum fell on hard times. It gradually lost its ability to innovate and thereby lost its momentum. Now that Worcester is reemerging as a vibrant part of the greater Boston area, WAM is also coming back, reconnecting with its history of boldness and experimentation and building on its tradition of risk taking. Th­e “crown jewel” of an industrial city, WAM can pride itself on having been among the fi rst in this country to collect and present photography as an art form (1904); the  first to acquire works by Monet (1910) and Gauguin (1921); among the fi rst to establish a partnership with public schools (1919); and the  first to import a medieval building from Europe (1927). It is with this tradition in mind that we are rebuilding the institution.

Fig. 2. As part of its [remastered] initiative, the Worcester Art Museum reinstalled three galleries of old master paintings, clustering works on walls painted the traditional art-gallery colors of green and red. Above the doorway hangs Flight into Egypt by Nicolas Poussin (1594-1665), 1627-1628.

Our ongoing priority is that of access–in the physical, aesthetic, intellectual, and social senses–to the museum. We began by reopening the museum’s main doors, which had been closed for quite some years (see Fig. 1). Because most visitors entered the building from a side entrance near the parking lot, the museum had chosen to economize by not staffing a second entrance. But there was a signi cant price to be paid for that economy–it deprived visitors of the “wow” experience of entering the Renaissance Court (Fig. 3), and by so doing it sent a message about the institution’s diminished vitality.

In addition to reopening the front doors we engaged the cutting-edge fi rm wHY Architecture to design and build a walkway to the main entrance so that families with strollers, visitors with disabilities, those who have a hard time using stairs, and those who choose not to use stairs no longer need to use our ADA-compliant back entrance. Opening this fall, the walkway will change the perception of our Salisbury Street facade considerably, combining beaux arts with high tech, using a work of art to enter a place of art (see Fig. 5).

Our changes to the permanent display started in 2013 with three galleries of old master paintings from the late sixteenth to the early eighteenth century. Our goal in what we have called [remastered] was to slow visitors down and encourage them to enjoy as many works of art as possible. The previous installation reflected traditional museum practice, while [remastered] broke away from the muted wall colors, the use of labels, and the presentation of old master works in single file and at eye level. Following the rule that innovation often comes by way of new uses of the past, we went back to the traditional picture gallery colors of red and green, as they are found in London’s Dulwich Picture Gallery and in stately homes all over Britain. Instead of focusing on an art historical narrative, we have emphasized the spatial relations as well as the subject matter that connects the artworks. In doing this we hope to encourage comparative and self-guided viewing, without the need to “know.” Clustered, as well as decorative arrangements, entice people to look up, down, diagonally, close, and far (see Figs. 2, 6). And so Poussin’s highly abraded Flight into Egypt was taken from storage to become a supra-porticus (see Fig. 2). Our theatrical rapprochement with original viewing conditions was further enhanced by tilting the paintings; we wanted to reconnect the wall with the space of the viewer and to make the experience more immediate, more visceral.

In such a context, the question of information flow needed to be addressed in new/old ways, too; the wall labels we are accustomed to have a distancing effect; they transform the experience of art into a lesson about an exhibition. We therefore provided alternative sources of information, starting with the basic tombstone information on laminates (a principle still used in places like the Galleria Doria Pamphilj in Rome). In addition, we made books available in the galleries and installed iPads that provide multilayered alternate kinds of information (conservators describing their work on a painting, for instance, or a social historian reflecting on images of aging in a work of art, but purposefully diluting the art historical voice). We also allowed visitors to comment or write their own labels.

Fig 6. For [remastered] the museum eliminated wall labels and began experimenting with alternative sources of information in the galleries, ranging from iPads and books to visitor-generated labels.

When it came to seating, we wanted ours to be flexible enough to encourage social interaction. Our current solution is to use the kind of bentwood chairs you find in European cafés, which can be moved around by visitors; the configuration of these chairs changes over the course of the day, and in the evening leaves the ghosts of conversations that took place there. We are still working on other solutions to comfortable seating.

Fig. 5. Access to the Salisbury Street entrance will be improved with the addition of a “bridge”-depicted in the bottom image in an artist’s rendering-designed by wHY of New York and Los Angeles, the first component of a ten-year master plan developed by the firm.

Besides collecting visitors’ comments-which continue to come in abundance-we have worked with students from Worcester State University and Worcester Polytechnic Institute to gather more data. Two of their studies found that the new installation has resulted in more visitor time viewing art and more dynamic movement throughout the galleries. The studies also indicated a range of responses, some negative, some confused, some enthusiastic, to our experiment with alternate labels, so the question of how to enhance the viewing experience while meeting the need for information continues to challenge us. As we wrestle with these approaches, the comfort and connection of the visitor with the art are our priorities.

Since [remastered] opened, we have experimented in other areas of the museum, notably in the arms and armor collection, which we acquired from our integration of the Higgins Armory Museum in 2014. Recently guest curator Eric Nakamura combined historic Japanese works of armor with contemporary artists’ reflections on the samurai (see Fig. 7). We created a bridge between different cultures and audiences by involving artists such as Miya Ando, Shawn Cheng, and James Jean who have built their reputations outside the traditional museum world and have significant followings in social media. The reward has been greater diversity in the age and ethnicity of our visitors, and that development has spread throughout the museum.

Fig. 7. The exhibition Samurai!, on view to September 6 and curated by Eric Nakamura, founder of the influential independent magazine Giant Robot,juxtaposes historical Japanese arms and armor with samurai-inspired works by contemporary artists.

The beauty of an encyclopedic museum like WAM is that it allows us to create–in fact it challenges us to create–different approaches to different cultures. Our presentation of folk art this summer in the exhibition American Folk Art, Lovingly Collected is a case in point. We have had to think about how we should present art that was conceived for a particular kind of domestic space in a formal museum setting. It is an exciting time at the Worcester Art Museum as we encounter the problems that point the way to interesting solutions for us and for our growing audience.

MATTHIAS WASCHEK is the director of the Worcester Art Museum.