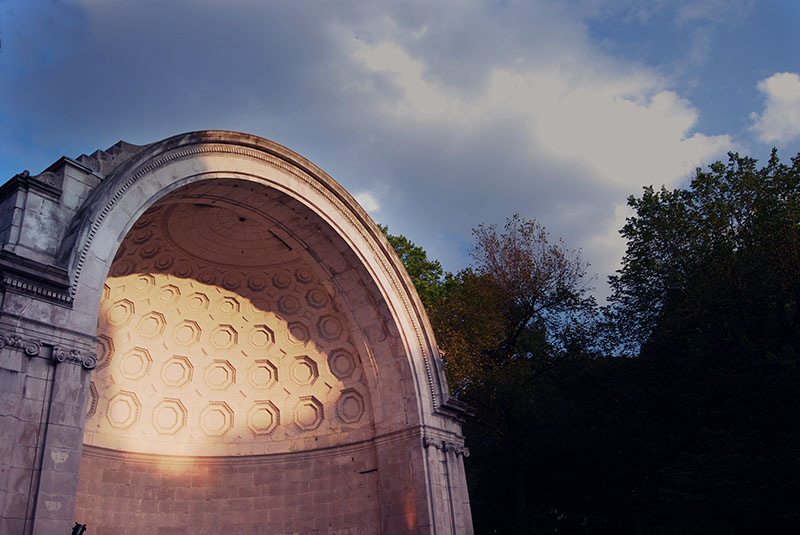 There are two ages of stone: its geological age and its human age. In one sense, the Naumburg Bandshell in New York, which has just been splendidly restored through the good offices of the Central Park Conservancy, dates to 1923. But in another sense, the Indiana limestone that makes up its finely cut ashlar blocks is hundreds of millions of years old. The human age of stone begins the moment it is quarried by human hands and exposed to the elements. Dust and the atmosphere immediately set to work on the surface, dissolving about half a millimeter of the stone in each century that passes. But now the band shell has been thoroughly scraped and sanded, and the removal of that sooty film lays bare its mineral core. The freshly exposed stone looks as good as new because, in a very real sense, it is new.

The band shell, battered not only by the elements but also by civic neglect and the tough love of a rambunctious citizenry, now glows as it did a century ago. Except for a pair of stone urns that originally flanked the attic level of the facade—removed long ago— the structure looks exactly as it did when it was first unveiled. Its cream-colored blocks are once again as smooth and precisely joined as the day they were set, while the dentilation of the cornice and the coffers of the inner dome once more catch the light of the setting sun as they did in the Coolidge administration.

With its signature half dome, the band shell is an haut lieu of the historical memory and cultural life of New York City. In addition to the countless summer concerts that have been performed there over the past decades, E. B. White wrote eloquently about the structure and Martin Luther King Jr. spoke there and John Lennon was eulogized from its raised podium. Indeed, the Sixties happened at the band shell as surely as they happened in Woodstock. Named for Elkan Naumburg, the banker, philanthropist, and musicologist who funded its construction, it replaced a far smaller building designed in a Moorish idiom by the park’s original structural architects, Calvert Vaux and Jacob Wrey Mould. The newer stage was the design of Naumburg’s nephew, William Gabriel Tachau, who had studied at the École des Beaux- Arts in Paris and came back thoroughly imbued with the exalted classicism of that school.

With elegant Ionic columns and paired pilasters at either end and a fine bronze door in the center, the band shell embodies the classical aspirations of the American nation in the early years of the twentieth century, even if it was one of the last projects in the city to be built in that style. Among its sources are the three so-called cisternoni in Livorno, designed by Pasquale Poccianti in the second quarter of the nineteenth century, as well as Pirro Ligorio’s nicchione in the Vatican Belvedere from about 1560. And while it does not completely match the more Victorian idiom that defines many of the built structures in Central Park, its formal language sorts well with this most ceremonious part of the park.

For all its charms, however, the band shell was very nearly demolished. The New York City Landmarks Preservation Committee, which can almost always be counted on to come to the wrong decision, voted for its demolition in 1989, and only the heroic efforts and legal action of Christopher London, Elkan Naumburg’s greatgrandson, saved it from that fate. But if his efforts merely preserved the building, and if Mayor Bloomberg’s administration, in 2003, intervened only to keep it from falling down, this latest campaign, begun in 2019, has restored it to its original glory. In June, the last of the scaffolding was removed and, less than two weeks later, concerts resumed. One of the very finest things about summer in New York has thus been restored to its citizens.