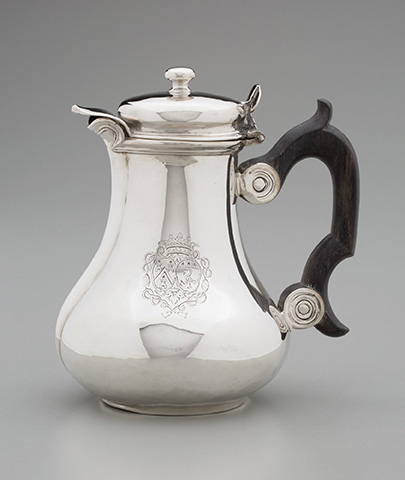 “I cannot bear tea, coffee, or chocolate, and cannot understand how anyone can like that sort of thing. I find that tea tastes of hay and rotten straw, coffee of soot, and chocolate is too sweet and soft. What I would willingly partake of, would be a good dish of Biran brot, or beer soup.” So wrote Charlotte Elizabeth, Princess Palatine, in December 1712, clearly not a fan of the once-exotic beverages that had been introduced to Europe by the early seventeenth century and were staple drinks for all levels of society by the end of the eighteenth. The Detroit Institute of Arts has organized a delightful and illuminating exhibition that explores the myriad ramifications that coffee, tea, and chocolate had on European culture. Included are not only examples of the wide array of accoutrements they spawned—from vessels for serving and storing to teaspoons, coffee grinders (Madame de Pompadour’s is included), and furniture such as a tea table by Adam Weisweiler—but also paintings and prints that record their use at home as well as in the coffeehouses that sprang up in England, first as places where men, primarily, met to discuss politics and business, and later became favorite haunts of the urban poor.

In addition to the artworks, there will be videos about the preparation of coffee, tea, and chocolate, as well as opportunities to touch, hear, smell, and taste. “The exhibition is a very exciting venture for the DIA, with regard to the rich, complex story we’re telling, and the innovative visitor-centered ways in which we are presenting it,” says DIA director Salvador Salort-Pons. “While European art will be at center stage, the exhibition examines global interconnections from centuries ago that we hope will resonate with all visitors today.”

The accompanying book (Coffee, Tea, and Chocolate: Consuming the World) includes a fascinating essay on the spate of satire inspired by the new social practices and coffeehouse culture as well as one on the Americanization of coffee preparation and drinking from the colonial period to the present.