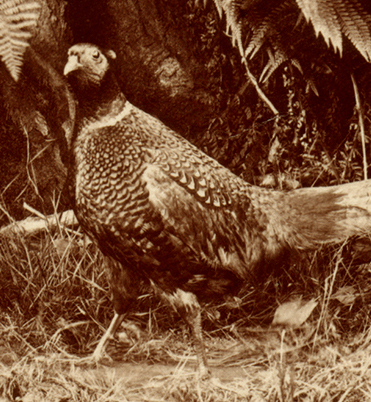 A feeling of intimacy between human beings and animals pervades By Hoof, Wing, Paw, or Fin: Creatures in Photographs, an exhibition at Hans P. Kraus Jr. Fine Photographs until December 20. Many of the images—daguerreotypes, tintypes, autochromes, and silver gelatin prints by the likes of Hill and Adamson, Peter Nissen, Harry Pointer, and Edward Steichen, and which include what’s likely the first photograph ever made of an animal, Joseph-Philibert Girault de Prangey’s Rome, Forum, Boeufs (1842)—come from a time when Darwin’s On the Origin of Species was new, and when many in the West still believed that the first people had been led astray by a talking snake.

In Pheasant and Ferns (1850s), a bird is seen emerging from between creeper-entangled trees and spreading ground cover, striding confidently into the path of Welsh photographer John Dillwyn Llewelyn. The bird is eyeing the camera, and looks somewhat taken aback, as if surprised to discover another animal (that is, a Homo sapiens) squinting at it through a boxy contraption of glass and metal. It deserves a New Yorker caption, the cartoonishness of the moment reinforced by Llewelyn’s decision to shoot from a low, ground-bird’s-eye view. And since this might have been the bird’s—or any pheasant’s—first encounter with the accoutrements of photography, invented some eleven years before, the moment might also be a novel one, both species intent on something new under the sun.

As likely, however, the seeming reciprocity between man and beast in images like these is simply a byproduct of photographers’ still somewhat awkward relationship with the tools of their trade. Flexible roll film wasn’t widely available until the introduction of the Kodak camera in 1888, and before that—unless you were an exceptionally quick hand at changing plates or slides—you either got your shot or you didn’t, especially when it came to unpredictable subjects like animals. If the exposure turned out a little off-kilter—like the shivering rabbit in Louis de Lucy’s 1860 Lapin Domestique that has decided to pose off-center on its wooden post, or Ferdinand Küss’s self-conscious-looking parrot (“you want me to hold my leg like this?”) in the photographer’s Still Life with Parrot, Fruit and Goblet (1860s)—well, so be it.

Many art critics of the nineteenth and early twentieth century would have seen proof in these awkward pictures that photographers with their matrices of glass, copper, and celluloid would never be able to capture the capital-T Truth that painters were capable of committing to canvas. But if awkwardness is the result of animals letting a little personality show, it seems simply that a different truth is bodying forth.

Photographers in the early twentieth century would learn to please the critics by playing to what were considered their medium’s strengths: stark, informative detail and the ability to stop a single decisive moment in its tracks. Edward Steichen’s Grasshopper and Wheat Stalk from about 1921—the period when he was turning away from pictorialism—is a perfectly gorgeous image, indexical yet artistic, that nails this new “straight” photography style. But at what cost? Looking closely at this shard of frozen time, one seems to detect that something within the grasshopper has turned to ice as well. That elusive intimacy, that animal subjecthood, is gone.

[This article was updated on November 25, 2019, to reflect a new closing date for the exhibition, originally scheduled for November 15, 2019.]