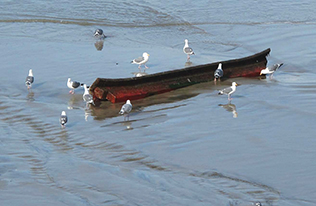 How a tsunami-tossed pair of sacred Japanese artifacts found their way across the Pacific and back home again.

Just before daybreak on a chilly March morning in 2013, Judson Randall scanned the beach in front of his weekend house in Oceanside, Oregon, with binoculars. He spotted an unusual object, surrounded by a cloud of seagulls pecking at its surface, that at first looked like a boat with a long keel. When the sun was high enough, he went down to take photographs and discovered something resembling a section of a roof about fourteen feet long, with a crease along the peak and traces of red paint. He telephoned the Oregon Parks and Recreation Department, and they came to pick it up.

Mystified, department rangers texted Randall’s photographs to Kyle Iboshi, a reporter for Portland’s KGW Channel 8, who had been reporting on Japanese debris landing on American shores, including a volleyball that had been returned to its high school. By coincidence, that day Iboshi was filming at the Portland Japanese Garden. He showed the photos to the garden’s curator, Sadafumi Uchiyama, a Japanese native. Uchiyama immediately identified the salvaged object as a kasagi, the curving crosspiece in the Myojin style from a torii, the bright vermillion gate that signifies the spiritual entrance to a Shinto shrine. Originally mounted atop two round posts, this section, he realized, must have washed away from a coastal village during the Great East Japan Earthquake and Tsunami of March 11, 2011. It had taken two years to float the nearly five thousand miles across the Pacific Ocean to the Oregon beach.

A month later, on April 8, Wali Via, an organic farmer in southern Oregon, saw a similar object on a sunset stroll with his wife, Jabrila, along the empty beach near the town of Florence. Having visited Shinto shrines in Kyoto and elsewhere, he too recognized the fragment, with its red paint intact, as the bowed crossbeam of a torii gate. A wooden plaque mortised into the middle of this one had miraculously survived the voyage and offered a major clue-the name of the donor, Toshimi Takahashi. Again, Oregon Parks and Recreation retrieved the fragment from the beach.

What began was a near epic effort to find the original home of the two sacred artifacts. The Japanese government took a stab, listing them on the National Oceanic and Atmospheric Administration’s Lost Belongings website. But after four months they were still unclaimed. The Portland Japanese Garden acquired custody of both kasagi and took up the cause of their return.

Portland and Japan have been closely connected for generations. In the postwar years lumber from Oregon forests was integral to the rebuilding of Japan. Several Japanese corporations maintain offices in Portland, which is now the sister city to Sapporo. In 1954 the first ship that left Yokohama for Portland after World War II was on a peace mission to deliver a stone snow lantern to the city with the inscription in English, “Casting the everlasting light of peace.” It now stands in the Portland Japanese Garden.

Founded in 1963, the five-and-a-half-acre Portland Japanese Garden nestles into the West Hills of the city, its serene tea garden, sand and stone garden, and strolling pond garden are framed by a towering curtain of mainly Douglas fir trees. Distant views of snowcapped Mount Hood recall the spirit of Mount Fuji. Under the direction of its current CEO, Stephen D. Bloom, it has become one of the leading cultural institutions in the country for promoting Japanese culture.

Dorie Vollum, now president-elect of the Portland Japanese Garden, first heard of the kasagi at a board meeting and volunteered to store them. By May 2014 more than a year had passed since their discovery. Vollum and Sadafumi Uchiyama, known to everyone as Sada, went to Japan to raise awareness of the found kasagi. They focused on the three coastal prefectures most affected by the tsunami – Fukushima, Miyagi, and Iwate, in the northern section of Japan’s main island – showing photos of the artifacts to everyone they met. Uchiyama recalls his shock at the still evident destruction. “My heart was bursting,” he says. And the task was daunting: of Japan’s thousands of Shinto shrines, huge numbers were identified as damaged or washed away by the tsunami. Even knowing the name of a kasagi donor was a weak clue. Takahashi is as common in Japan as Jones is in the United States.

Through a friend, Uchiyama and Vollum appeared on a noon news broadcast on NHK, a national television network similar to our PBS. Soon after, Uchiyama received an email with an offer of help from Hitoshi Sakai, who worked at the Iwaki City Historical Society in Fukushima Prefecture. While he was making inquiries, Sakai realized that the search had never included the fourth prefecture affected by the tsunami, Aomori, farther to the north. Very few had died there, but the area had lost myriad dwellings. He called Jun Furusata, the deputy director of the museum in the coastal city of Hachinohe. “Do you know a Mr. Toshimi Takahashi?” Sakai asked. Furusata answered, “I know him well.” He was the retired head of the fishermen’s guild in the port of Okuki, a village outside Hachinohe, whose torii had indeed been washed away in the tsunami. Photographs were sent, including ones of the donor inscription. When the eighty-five-year-old Takahashi looked at them, he said: “This is my kasagi.”

Takahashi had dedicated his torii in 1988, as part of a small shrine that fishermen visit to pray for their safe return from their voyages. Takahashi was also there to see it destroyed in 2011. The inlet for the fishing boat marina is bracketed by two hills, and the Itsukushima Shinto Shrine stands on the farther hill, nearest to the ocean. Takahashi was standing on the other hill when the tsunami struck and saw a boat thrown up by the storm surge smash into his torii gate, breaking off the kasagi. In a way, Takahashi wasn’t surprised his kasagi was coming home. He noted that a tsunami in 1898 had washed away a statue of a goddess from the shrine, which drifted back to shore ninety years later. The Okuki shrine has a way of recovering its lost elements.

The other recovered kasagi was a close match to one destroyed on the landward side, originally donated by the late Kinjiro Takahashi, formerly head of another fishing guild. His son, Masonori Takahashi, touched by the Portland garden’s diligence, committed to rebuilding that torii. “Then,” he said, “the two kasagi can come back home together hand in hand.”

In August 2015, courtesy of Pacific Lumber and Shipping, the kasagi crossed the Pacific Ocean once again. They arrived to great fanfare with a Shinto ceremony in Yokohama, including an address by Caroline Kennedy, the United States ambassador to Japan, in which she said, “now we know that the ocean is not a barrier but a connection.” The kasagi were then returned to Hachinohe, where their original carpenter, Suetaro Takekoma, reconstructed them, “putting all my heart into sanding and repainting,” he says. It took some ten men, using cranes, to assemble the torii.

On May 2, 2016, I was in Okuki for their rededication ceremony. The shrine is adjacent to a protected breeding ground for seagulls. It put me in mind of the photograph I had seen of one kasagi on the Oregon beach surrounded by gulls, a kind of reception committee. And here were both kasagi, reborn into new torii gates, welcomed home, as it were, by their own gulls, the black-tailed variety. I learned from Uchiyama that in Japanese the two kanji, or characters, for torii literally mean “bird perch.”

For the Shinto ceremony, villagers and guests gathered on the far side of the marina, and the torii gates across the water stood festooned with gaily colored fishermen’s banners waving in the breeze. The altar displayed a large deepwater fish with bulging eyes. A priest in lavender robes officiated, distributing tree branches to various dignitaries to raise toward the torii gates. At the end, swirls of white confetti like snowflakes were lifted into the air to a chorus of seagull cries.

The day before, I had seen the gates up close in all the shining glory of fresh vermillion paint. The words “Portland Japanese Garden” were carved into them, to signify the new donor along with the Takahashis. They are the only torii gates in Japan with English lettering.

PAULA DEITZ is the editor of The Hudson Review.