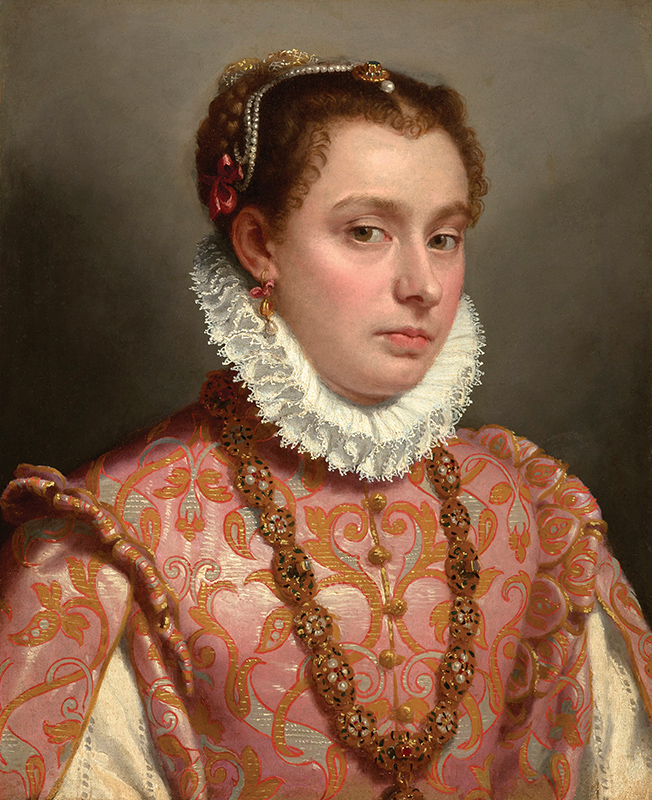 It is rare for a single exhibition to do as much for a single painter as the Frick Collection’s new display of Giovanni Battista Moroni’s portraits promises to do for this neglected sixteenth-century master. Moroni is not unknown: his paintings hang prominently in the Metropolitan Museum of Art, the National Galleries in Washington and London, the Louvre, and many other eminent institutions. But the average museum-goer is apt to be unfamiliar with Moroni, and at the Frick even those who have already encountered him may well feel, when confronted by so many noble works in one place, that they must fundamentally reassess the man. To this writer, Moroni had long seemed to be a pleasant painter of the second rank. Now he seems to fly far nearer the orbits of his great Venetian contemporaries than most of us would have thought.

It is more than a hundred years since Bernard Berenson dismissed Moroni as a “mere portrait painter,” and an “uninventive” one at that. But it is almost as long ago that the great Italian scholar and critic Roberto Longhi sought to redeem Moroni, praising his realism and his painting dal naturale, which set the stage for another Northern Italian master, Michelangelo Merisi da Caravaggio, roughly a generation later.

Moroni was born and spent much of his life in the small town of Albino, and many, if not most, of his nearly 125 surviving portraits depict the men and women who were his neighbors there. Perhaps only in the Italian Renaissance could a small town, scarcely larger than a village, claim its own transcendent master in residence. Although he lived most of his life in Albino, and worked in the nearby cities of Brescia and Trent, Moroni is largely associated with Bergamo, where, in truth, he spent only a relatively short time, from 1557 to 1562. This city stands between Venice and Milan and—although part of the Venetian Republic during Moroni’s lifetime—it drew artistic influence in equal measure from both those capitals.

The able curators of the present exhibition, Aimee Ng, Simone Facchinetti, and Arturo Galansino, balk, however, at any suggestion of Moroni’s provincialism, a term that Jacob Burckhardt, among others, applied to both the artist and his sitters. “The somewhat pejorative word,” Ng and Facchinetti write in the catalogue, “engages the issue of class in the context of Moroni and his ‘regional’ clients in and around Bergamo, with respect to major cultural centers like Venice, Florence, and Rome.”

But perhaps we should not be so quick to reject the term. Although the cultural distinction between province and metropolis is complex, it reveals itself in the degree to which the former adjusts its practice to the latter’s. In the case of Moroni in Bergamo and Albino (we cannot be certain that he ever actually visited Venice or Milan), this provincialism appears to arise from a limited, largely secondhand acquaintance with the latest developments in those capitals. And it is precisely the aspiration to conformity and the circumstantial impediments to achieving it that account for the specialness, the singularity, of his art. It is like some fortuitous element in the soil that imparts to one vineyard a quality that sets it apart from others whose output accords far more closely with conventional taste.

Moroni’s portraits are clearly influenced by such great Venetian contemporaries as Titian and Veronese, among others. His insistent use of pictorial props to define his sitters and their place in the world was nearly universal among the portraitists of his day, whether in Venice, Florence, or Milan. The present exhibition underscores this fact by including sixteenth-century objects—a pair of shears, a jeweled cross, a sleeve of mail, and others— that closely approximate what Moroni depicted. But the lived-in weight of his subjects, the dispelling of most, if not all, mythological distance between viewer and sitter, is an essentially Venetian contribution, and it is present to an exemplary degree in Moroni. But it is equally clear that no Venetian would have painted a portrait as Moroni has. An almost nocturnal richness, with glowing undertones of honey and molten gold, lingers about the edges of Titian’s portraits: in Moroni this mood and its attendant enchantment give way to the more pedestrian light of day. And rather than brilliant daylight, it is a slightly overcast, late afternoon light, when the sun is several hours past its zenith and hastening its decline. It is a light laced with a leaden, greenish gray whose precedent may be profitably sought in the work of earlier Milanese masters like Vincenzo Foppa and Ambrogio Bergognone.

But the most direct source of Moroni’s palette is Moretto da Brescia, under whom he studied. This debt is evident in both Moroni’s portraits and his religious works. At the Frick that religious element is present in several images that stand halfway between portraits and devotional works. A relatively early example, Gentleman in Adoration before the Madonna and Child (Fig. 4), depicts the sitter, seen from the shoulders up, turning in prayer toward Mary and the infant Jesus. What is so striking about this and the other donor portraits is that they dispense with all the moodiness, the almost inebriated state that painters traditionally invoke in order to alienate religious experience from ordinary consciousness. There is something polemically average and unexceptional in the way daylight falls across the sitter’s face and form, articulating the drab gray wall behind him. As the catalogue explains, this work does not depict a religious experience so much as a disciplined, self-induced hallucination. The sitter appears to be practicing the Exercitia spiritualia of Ignatius Loyola (that most worldly of saints) to engage through his five senses with Jesus and Mary, “to smell the infinite fragrance, and taste the infinite sweetness of the divinity.” Never before in Western art, and rarely thereafter, would religious experience be expressed with such programmatic banality.

The same grayish green light fills Moroni’s secular images as well. These include bust-, half-, three-quarter-, and full-length portraits standing and seated: we find it in portrait heads of Isotta Brembati (Fig. 9) and Lucrezia Agliardi Vertova (Fig. 5) from around 1550 and 1557, respectively, and the fine standing portrait of Gian Ludovico Madruzzo (Fig. 8) completed in 1552. In keeping with the slightly minor key of the light, the sitters often register a trace of impatience or unease, a quality rarely encountered in old master portraiture. Certainly many of Moroni’s mannerist contemporaries exploited some hint of troubled angst in their sitters. But that almost theatrical emotion is very different from the reserved querulousness of Moroni’s sitters. At the other extreme, many cinquecento portraitists—Lorenzo Lotto and da Brescia, for example—sacrificed psychological insight in the interest of creating flat, two-dimensional patterns of color and form. Moroni, however, expands the observable world to four dimensions, the fourth being what we might call character. He not only captures his sitters’ moods, as many good portraitists do: he uses character to tear through the flatness of the canvas just as some projecting arm or table corner tears through the foreground of Caravaggio’s picture plane, enhancing the intuition of depth.

One of his best-known works, The Tailor (Fig. 10) from the National Gallery in London, depicts a young man in a white doublet against a gray backdrop, with scissors in one hand and a length of fabric in the other. The composition is oddly angled, almost askew, and our attention is drawn to the sitter’s expression, its directness verging on impertinence. This is the same look, reserved and slightly ill at ease, that we encounter in Moroni’s full-length likeness of Isotta Brembati (Fig. 6) and the lovely Portrait of a Young Woman (Fig. 1), one of his final works. One begins to wonder if there was something in the water of Albino, or in the character of Moroni himself, that would account for this almost peevish expression.

But psychological penetration is not the same as exemplary artistic skill, and it must be emphasized that, for all his oddities, Moroni was first and foremost a master of his art. If he rarely indulges in the dazzling surface patterns that so delighted his contemporaries, he exhibits in many of his works those subtle masterstrokes that only a great artist could conceive or carry through to successful completion: the serpentine profile of Bernardo Spini’s black cloak (Fig. 11), which presages Velázquez; the choice of orange satin against black for the costume of his wife, Pace Rivola Spini (Fig. 12); the elegant graphic integration of words and images in Bust Portrait of a Young Man with an Inscription (Fig. 13); the compositional mastery exhibited in the painting known as Titian’s Schoolmaster (Fig. 14), inexplicably not included in the Frick show. As with so many of Moroni’s works, these are subtle touches: but each of them, entirely by itself, would suffice to offer irrefutable proof that we stand in the presence of a master.

Moroni: The Riches of Renaissance Portraiture is on view at the Frick Collection in New York to June 2.