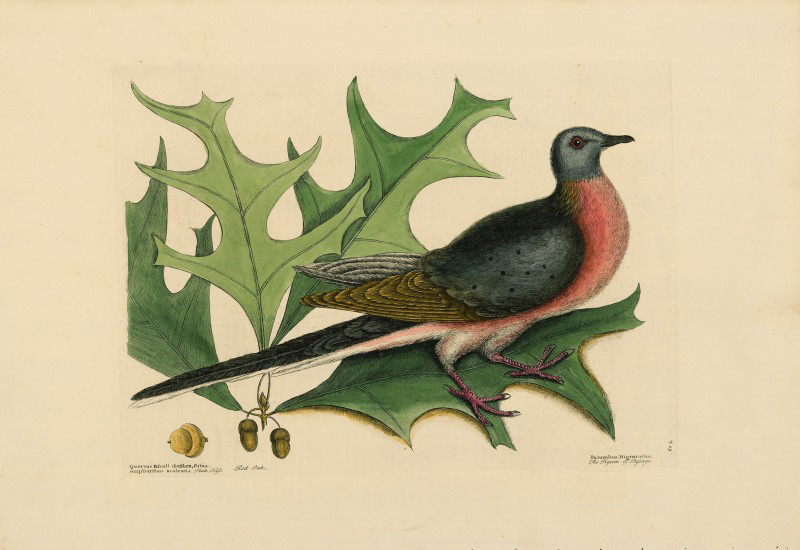 A full century before John James Audubon published his Birds of America, an Englishman, Mark Catesby, brought out two folio volumes of what he grandly named Natural History of Carolina, Florida and the Bahama Islands….This is probably the first history of any importance ever done of American flora and fauna; certainly it is the foremost on American birds, which comprise a great part of the work.

Catesby came to Virginia in 1712 to collect plants. In 1722 he returned with the intention of compiling this major work on our natural history. When he took his material back to England in 1726, however, he was so appalled at the cost of production and so fearful that if he turned his drawings over to an engraver they would lose much of their accuracy, that he learned to etch, from Joseph Goupy, and executed his own plates.

The excitement Catesby felt as he found and recorded his subjects is transferred to his pictures. He did not consider himself a good artist, yet he had a fine sense of design which is, of course, the foundation of all art. If you draw a line around some of his subjects, break them down into their various interesting shapes and spaces, and conventionalize them, you will have patterns that delight the eye.

In instances where a branch or a bush was too stiff or led the eye out of the picture, Catesby broke it to make a more pleasing arrangement, as in the case of the Soree and the Blue Gentian, or the Parrot of Carolina. Not such a happy result was achieved, however, when he broke the tail feathers of the flying tropic bird because the confines of the plate would not allow of getting their length all in!

We can learn a great deal about the artist from his work. That he had a whimsical streak and a sense of humor is revealed by the one-eyed Bison plate. The great beast is absurdly dwarfed by the acacia plant, and the artist’s signature, MC, hangs from the very tip of a twig and looks like a twig itself. The humor is also evident in the Pied-Billed Dopchick, which he presents in the water, one webbed foot straight out, horizontally, like a small boy experimenting with a sail in the wind. Then there is the fish in the act of swallowing the artist’s monogram, and the tumblebug standing on his two front feet while he balances a ball of dirt on his hind ones

When Catesby had an ugly subject, he drew attention away from that ugliness by showing the subject against an interesting pattern of plants or sea growth; even his snakes are entwined among flowering vines, and the Globe Fish, which reminds one of a pot-bellied amiable man asleep with his hands clasped across his stomach, is shown at the base of a plant, with a leafed twig breaking the globe into a more pleasing arrangement. But there were many cases where he gave up the “prettying” of a bald subject as a bad job.

Among the now extinct birds which Catesby recorded are the Pigeon of Passage and the Cock of the American Woods. Of the latter he wrote: “This bird was about a third bigger than a common Partridge….Some of these birds I saw at the Honourable the Earl of Wilmington’s at Chiswick, who told me they were natives of America, but from what particular part his Lordship knew not….”

There is little doubt that this is the lost heath hen, which was an eastern variation of the western prairie chicken. It was a native of Massachusetts, Long Island, and New Jersey. The state of Massachusetts spent many thousands of dollars in an effort to propagate the bird, but the last known specimen died in Martha’s Vineyard in 1932. Brush fires were a contributing factor to their extinction. Catesby gives the bird a square tail instead of the blunt arrowhead shape it really had, doesn’t feather the legs enough, and fails to show the quail-like markings of the face; but in other respects it is essentially the same as the specimen of the cock on display at the American Museum of Natural History in New York. This display, incidentally, shows a nest of the birds, a hen and chick. The eggs are oval and about the size of those of pullets. Only one other nest of eggs has been preserved.

Was the heath hen rare in Audubon’s day? Presumably so, since he failed to picture it, although he did show its western cousin, the prairie chicken.

Other birds now nearing extinction which Catesby portrayed are the ivory-billed woodpecker and the parrot of Carolina. And among the rare plants is the steuartia, malachodendron. This flower is also featured in Audubon’s plate of the Carolina Turtle Dove, which is sought today as much for the flower as for the bird.

Catesby’s description of the ivory bill, or, as he called it, The Largest White Billed Woodpecker, throws light on the reason for its rarity now: “The bills of these birds are much valued by the Canada Indians who make coronets of them for their Princes and great Warriors…. The Northern Indians, having none of these birds in their cold country, purchase them of the Southern People at the price of two, and sometimes three Buckskins a Bill…”

Of the passenger pigeon he wrote: “In their passing the People of New York and Philadelphia shoot many of them as they fly, from their balconies and the tops of houses,” a bit of information which pleases this country-born admirer of the pigeon because it shows that the blame for its final extinction rested upon the shoulders of the city dwellers as well as the country ones.

There are several editions of Catesby’s work and not all the subjects are in every edition. The later editions were revised and expanded to admit further discoveries. The 1754 edition, for instance, carries two plates with the signature of G. D. Ehret, who worked in the middle of the century for Linnaeas, Trew, and Weinmann. These are the Mangrove Tree and the Magnolia plates. The color in the latter is beautifully done—green leaves and cream-white petals against a deep brown background. The reds of the large bob are repeated in the flower’s center and again in the joints of the stems, while the pale orange tones of the bud at the right are carried out in the reversed leaf at the left and again in the very edge of another turned-down leaf. The Magnolia with the Velvet Ant is signed by Catesby’s monogram, MC, with a reversed C forming the first part of the M. According to Gordon Dunthorne, the magnolias published by Catesby were the first recorded in the eighteenth century.

Among the “Encouragers of this Work” is the name of Robert Furber, who did the Months in Flowers which Colonial Williamsburg has made famous and familiar. In fact, Furber used in his arrangements many of the flowers which Catesby introduced into England, among them the Virginia aster.

While there are many inaccuracies in these pictures, those very inaccuracies give them their greatest charm. Catseby’s whip-poor-will, sitting, under a ginseng bush, for instance, is a pretty, swallow-like creature, with long wings and a very tiny mouth. Then, with disarming frankness, he admits that, although he had heard their calls many a time at evenings, he never was successful at glimpsing one of the birds until after the drawing was made and published.

Mark Catesby, artist, teacher, botanist, naturalist, and author was indeed a man of many talents. We admire his courage in seeking his subjects in the unknown waters and wilderness of eighteenth-century America, and find his work full of charm and interest.