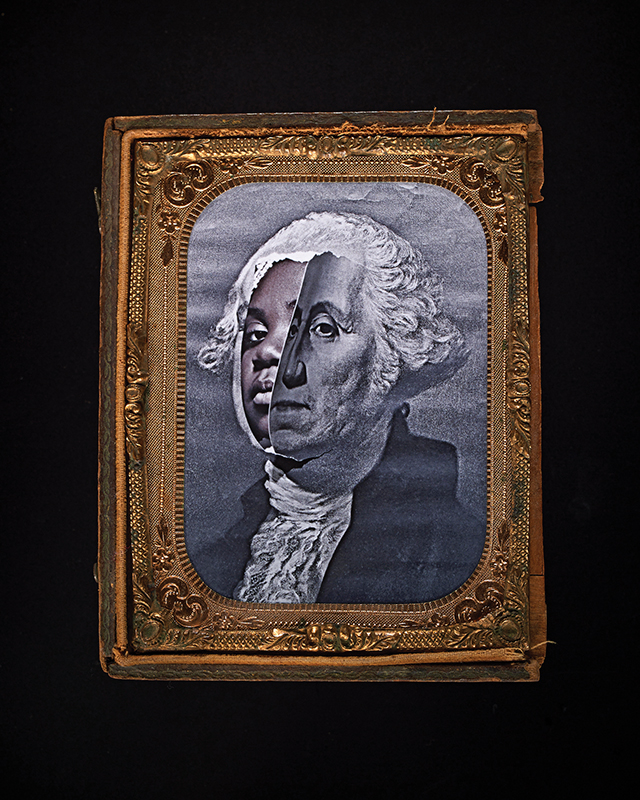 If there was a poster boy for January’s Winter Show in New York, it was surely Maxine Helfman’s George Washington, from her Forefathers series offered by Elle Shushan. Washington appeared not only in the show’s promotional materials but also in the Wall Street Journal, Architectural Digest, Artnet, the Art Newspaper, and BlackBook, among other print and online publications. Perhaps this should not come as a surprise: Helfman, a self-taught photographer, took an iconic image of the “Father of the Country” and made us look at it anew. Then she went further, as she discusses here.

I did George Washington in 2014, as I thought he made a powerful statement about presidents who were slave owners—it reminded me of the story of Ona Judge, the runaway slave who was relentlessly pursued by the Washingtons. After I did Washington, I was drawn by the idea that so many presidents—twelve—were slave owners, not only the early Virginia presidents who might have been expected to have slaves, but even Ulysses S. Grant, so I decided to do a series showing all of them. It speaks to the subject of power and illustrates the hypocrisy of “for the people.”

EG/TMA: Why did you decide to use the “daguerreotype” format for the series?

While the invention of the daguerreotype postdates the time of some of the presidents in my series, it became a commonly used format, so it seemed appropriate. The small size forces the viewer to look with intent at the images. The faces I layered into the presidential likenesses were from portrait sittings I have done—I think the image below maintains the presidential aura.

I searched out period daguerreotype cases—collecting eighty-four in all, since the series is issued in an edition of seven. My images are archival metallic photographic prints, housed in the original leather daguerreotype cases, also known as union cases. In my process, the original mat, glass, and preserver are then reinstalled over my print.

EG/TMA: Forefathers is your third series that looks at historical art through a new lens. Can you tell us about the others, and what led you to artworks of the past to raise questions of gender and race today?

One series I did was Facing North, which was simply an aesthetic project inspired by fifteenth- to seventeenth-century Dutch portraits and still lifes that I have always loved for their use of light and tone. Historical Correction, also inspired by old master portraits was my first series with a deeper intent. It was created to have the look of a lost archive that embraced diversity.

My work comes from finding connections between past and present—it’s my way of making sense of current events. I grew up during the civil rights era, and always found racial injustice unacceptable. But it seems that every decade, this injustice is just reshaped. Historical Correction and Forefathers both speak to that idea. I am drawn to looking at history from a contemporary point of view, with finding an alternate perspective and a stepping stone to a wider conversation.