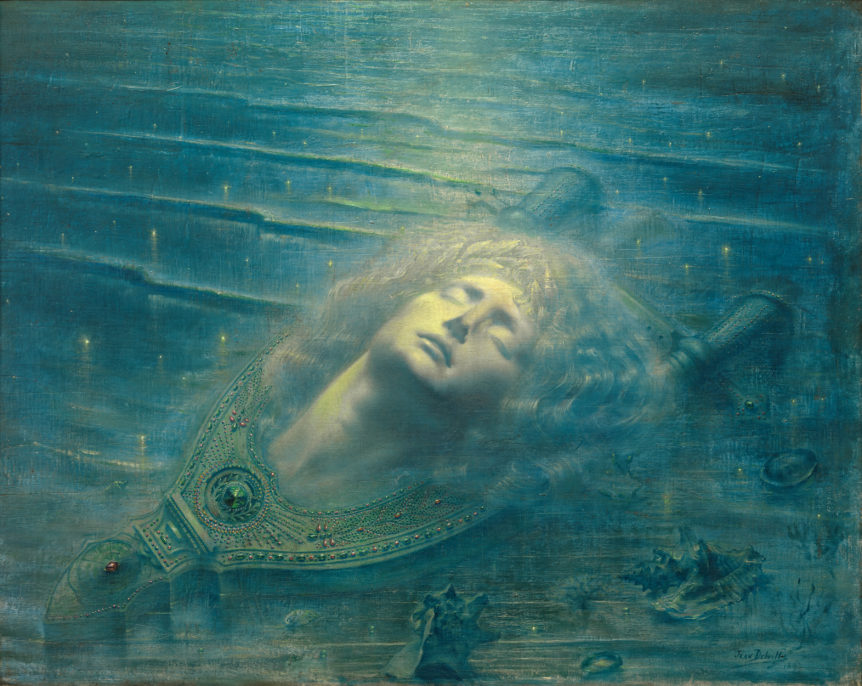 When Charles Baudelaire spoke of les paradis artificiels he was referring to an internal bliss brought on by opium and hashish. But this notion of an artificial paradise could apply with equal justice to many other and external products of the human mind, from an opera to an opera house, a painting or a poem. And that phrase may point to the best way to approach the strange art on view in the Guggenheim’s Mystical Symbolism: The Salon de la Rose + Croix in Paris, 1892–1897. In what has become a museological micro-trend in recent years, the Guggenheim seeks to reenact a bygone art exhibition, specifically six boisterous annual salons held (at least initially) at the gallery of Paul Durand-Ruel in the last decade of the nineteenth century. In the process, the exhibition shines a welcome light on several dozen of the most extravagantly mystical paintings and prints of that vanished age.

Some of the artists in the present show will be known to seasoned museumgoers: Ferdinand Hodler, Fernand Khnopff, Georges Rouault, and Félix Vallotton are still widely admired over a century on. But who today knows or cares about Rogelio de Egusquiza, Alphonse Osbert, or Armand Point? They have been relegated to the dustbin of art history for the not immeritorious reason that they fall far short of the first rank. And yet, interestingly enough, a certain lack of talent need not, should not, stand in the way of our enjoying the Guggenheim exhibition. Indeed, it might even serve as a perverse incitement, assuming that one has a tolerance for kitsch or something like it.

The symbolist movement, of which this show covers a small and disesteemed subchapter, was an inevitable reaction, in the last years of the nineteenth century, to the realism in art, naturalism in literature, and positivism in philosophy that had defined the previous generation of French culture. Not for nothing did Léonard Sarluis and Armand Point’s poster for the fifth Salon de la Rose+Croix in 1896 depict Perseus raising the severed head of Émile Zola, the high priest of naturalism and anticlericalism.

Clearly, Zola and his compeers had it coming. As gifted as they were, their arrogant, totalizing world view, especially in the care of lesser writers and artists, eventually played itself out and seemed like a dead end. At the center of the revolt was the largely forgotten figure of Joséphin Péladan (1858–1918), a novelist and art critic. Something between a pope and a publicist, he enjoyed parading about the boulevards of Paris in the beard and long robes of Babylonian kingship, such as we see in two portraits in the present exhibition, by Alexandre Séon (Fig. 2) and Jean Delville (Fig. 3). He answered to the title of “Sâr,” which apparently means “high priest” or “leader” in several ancient Semitic languages. Above all, Péladan was a mystic, and it was this bent that attracted him to an early seventeenth-century form of esoteric Christianity known as Rosicrucianism, so named for the Rosy Cross that was its defining emblem and symbol.

Not everyone at the Salon de la Rose+Croix was a mystic poseur or Wagner-olatrous airhead. That Georges Rouault was a first-rate artist long before he became an expressionist is proved by The Holy Women Mourning Christ (Fig. 5). This darksome depiction of four female figures surrounding a shrilly illuminated corpse owes as much to Leonardo as to Rembrandt. But most of all it attests to an admiration, shared by many painters in the Salon, for Gustav Moreau, an older artist and a kind of spiritual mentor to many of them. There is a similar seriousness of purpose, as well as considerable pictorial mastery, in The Disappointed Souls, by the Swiss artist Ferdinand Hodler (Fig. 4). Here, five grieving men are arrayed, as in a frieze, before the sort of depleted landscape that would be colonized, two generations later, by Samuel Beckett. And although Henri Martin is almost entirely unknown today, his quasi-pointillist Young Saint, depicting a haloed girl in her communion dress who rises among the tawny wheat fields of rural France, is nobly painted and composed (Fig. 6).

A similar pietism, of course, was a constant in almost all nineteenth-century art, with the important exception of impressionism. But how different is the piety of Rouault and Hodler and Martin from that of the realists and the academic painters of the École des Beaux-Arts. Rather than an entirely externalized social construct and constraint, it has become the expression of an intensely subjective state, which in itself is a polemical rejection of the realist movement in art.

Few of the other painters included in Mystical Symbolism are quite as good as Rouault and Hodler. And yet they deserve a hearing. Surely, it is the easiest thing in the world to scoff at the hyperbolic emotionalism, even pretension, of Marcel-Béronneau’s Orpheus in Hades, in which a rather pale and soulful young man, very much in the manner of Gustav Moreau, strums a lyre amid the eschatological crags of the underworld (Fig. 7). The Thracian bard reappears in Delville’s feverish Death of Orpheus, his head now mystically merged with his jewel-encrusted lyre, lying in the blue waters of the Pierian stream. And so it goes with Point’s Annunciation or Ancilla Domini (Fig. 9), a brightly colored annunciation scene that sets Western painting back by about four hundred years in a competent but ultimately uninspired reenactment of the Florentine Quattrocento.

What is really happening in such works of art? In one sense, the mystic bent of Péladan and of the artists who showed in the Salon de la Rose+Croix was in complete sympathy with the age, and even with an important strain in modernism itself: one thinks of the novelist Joris-Karl Huysmans’s explorations of satanism, William Butler Yeats’s visits to Madame Blavatsky, and Wassily Kandinsky’s spirit-laden forays into color theory. It seems quite likely this last association endeared the show, when it was first proposed, to the curators of the Guggenheim, even though it is hardly compatible with their usual mission. For there is surely a direct connection, both spiritual and formal, between symbolism and abstract art, a fact attested not only in Kandinsky, but even in Mondrian and certain members of the New York school.

But there is a more important argument to be made for the art of the Salon de la Rose+Croix. Amid the hard, often sordid, and ineluctable realities of a world altered beyond recognition by train tracks, telephone wires, and factories belching lethal smoke, the painters of the Salon de la Rose+Croix, even the least of them, stood in the vanguard of the opposition. They took refuge in dreams and religion, and in the cult of beauty, of visual, poetic, and symphonic ravishment, however gaudy and impure that ravishment might seem to us today. In this light, these painters represent a particular instance of a common, if not universal, striving. It is as evident in the inner domes of Hagia Sophia and the exuberant classicism of the Paris Opéra as it is in the more recent installations of Yayoi Kusama and James Lee Byars. In a phrase that Poe bequeathed to Baudelaire, it is the hunger to go “anywhere out of the world.” And to the receptive soul, the gaudy, narcotic, brilliantly colored works of the Salon de la Rose+Croix will take us there as surely as any other cultural movement of the modern world.