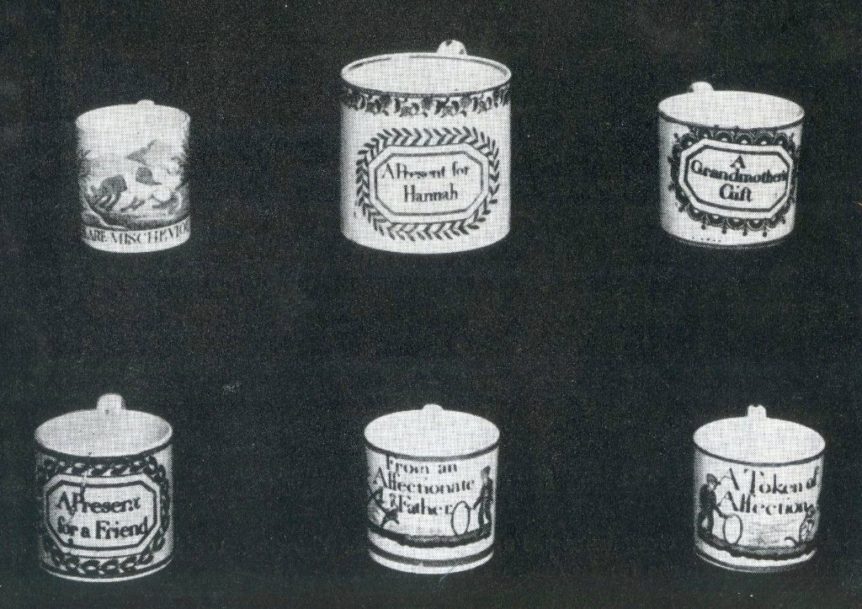 From time to time Mrs. McClinton contributes a note to ANTIQUES on some intriguing bypath of collecting interest. This one, which offers an appealing approach to nineteenth-century ceramics, will be incorporated in expanded form, in her forthcoming book on antiques, to be published next year by McGraw-Hill.

Nineteenth-century children’s mugs have long attracted collectors, but few are perhaps aware of the wide variety of patterns in which these mugs may be found. The collection of pottery mugs formed by Margaret H. Jewell, now on display at the Harrison Gray Otis House in Boston, includes no less than 1200 examples, with hardly a duplicate.

Among the earliest, made before 1840, are mugs decorated simply with a name and inscription, sometimes adding a wreath of leaves. Today these mugs are rare. They were made in canary as well as cream color, with transfer decoration most commonly in black, though other colors, such as vermilion transfers on canary, occur.

Sometimes there are pictures in addition to the inscriptions. One group of early transfers on canary ground carries such inscriptions as A Carriage for Ann, A Pony for Edward, or A New Doll for Margaret, together with pictures of the objects mentioned. One canary mug with black transfer has an alphabet border and the words Come dear child and let me see how you can do ABC.

Transfer portraits in black on cream and canary grounds form a small group of mugs. The rarest is the Washington and Lafayette, made in about 1824-1825. A portrait of Adams also appears, in black transfer on yellow.

There is a large group of mugs with luster decoration. Copper luster occurs in bands of blue, cream, or tan, or a flower design. Luster decoration is also used on about six different varieties of Gaudy Welsh-ironstone pottery dating about 1840 or 1850. A rare group of mugs has silver resist decoration, sometimes with luster bands in addition to transfer-printed scene in red, brown, or black. Pink luster is also found, with and without transfer scenes. A Sunderland pink luster mug bears the inscription Forget and Forgive, in a wreath.

One group of creamware mugs has hand-painted sprays of flowers and border. Among the earliest, decorated with roses, yellow flowers, black foliage, and brown bands, is on marked Bristol. An early creamware mug with Bird’s Nest design in black transfer is probably Liverpool. Others are attributed to Leeds or Bristol, while some toy mugs with flowers are thought to be late Staffordshire.

Blue and white pottery mugs form another group, the color varying in tone from light blue to a rich dark shade. One little mug has a stippled border and the old English Potter’s rhyme:

No Handycraft can with

We made our pots

Of what we are.

Among the later mugs which are more readily available today are some with rhymes from children’s poems, and scenes from such children’s books as The Boys Treasury of Sports and Pastimes. The latter provided the subject matter for a series of mugs depicting children’s games. There are many of these game mugs, in different series. Among the earliest is that which includes Ring Taw, Whip Top, Walk My Lady Walk, Shuttlecock, Pyramid, and French and English. Later ones illustrated Blind Man’s Buff, Leap Frog, and Marbles. These were printed in black, brown, red, or blue, with crude splashes of red, yellow, and green.

Franklin’s maxims from Poor Richard’s Almanac appear on another series of mugs, made by several different companies. The common number of maxims on each mug is two, but sometimes there are four. One of the most available is Keep they shop and they shop will keep Thee.

Among other maxims found on mugs are Idleness is the Parent of Want and of Misery, Industry is Fortunes Handmaid, and Never Speak to Deceive nor Listen to Betray. Sometimes religious verses were used, enclosed in Wreaths of flowers.

The Reward of Merit series forms another group of mugs, with inscriptions which include A Present for Knitting Well, For Attention to Learning, Present for Going to School, and Present for Writing Well.

One of the prettiest groups is that of the Months. Each has a verse. The one for January reads:

How the rolling seasons Vary

Through the years from January

When the Infant Smile Awakes

There is another series which shows children and their pets. Included in this are Puss’s Breakfast, Little Playfellow (dog), Beggar’s Petition (dog), Billy Button (horse), and Bird Catchers. Still another animal group featured elephants, tigers, goats, dogs, and all sorts of birds. A lion with a palm tree printed in blue is marked Davenport, as is also a mug with a zebra design.

There is quite a variety of alphabet mugs, which even include the deaf and dumb symbols. At least two different series are known. On one of them, for instance,

E was an eagle chained to his perch,

According to the other,

E was an Emperor who ruled in fear,

F was a fiddler who fiddled for beer.

Today a collection of mugs with late transfer scenes may still be acquired at a moderate price. Early transfers and patterns in silver resist, however, are scarce and expensive.