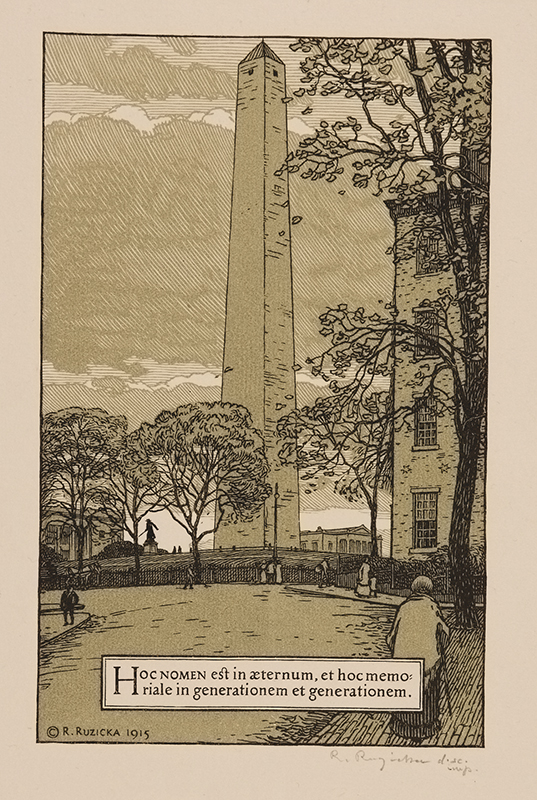 Every town has its emblematic landmarks. And for the walker in the city—native or newcomer—these are not always the biggest buildings, or the most historic byways. The old Central Savings Bank on Broadway at 72nd Street, and the tiny island of green across from it, can signify Manhattan as much as does Grand Central Terminal. Crossing Chicago’s Michigan Avenue bridge centers you in the city more than a trip to the top of the Sears (now Willis) Tower. And if you find yourself passing through the dark Temple Place in downtown Boston, you’ll understand something about that city as a city—not a history lesson.

Boston, of course, is a history lesson, a place so packed with tourists that it can be difficult to apprehend the almost brutal beauty of King’s Chapel, or appreciate the formal grace of the Longfellow Bridge. And with its low-rise charm now compromised by a host of high-rise towers, nothing—to borrow from Wordsworth—“can bring back the hour” when a muted splendor was the defining quality of this red-brick burg. But looking at the city as rendered by illustrator and designer Rudolph Ruzicka, one can imagine a time when its history was—if not living—at least not quite as monetized as it has since become, when even a legendary site was, perhaps, just a companion to the corner store, a familiar face encountered on the way to work.

Born in Bohemia, Ruzicka was raised in Chicago, where he left school at fourteen to apprentice as a wood engraver. He took drawing classes at Hull House and the relatively new Art Institute, and, after a succession of jobs with engraving and printing concerns, moved to New York City in 1903. There, he landed a position drawing designs and lettering for the timetables of the Phoebe Snow, a passenger train of the Lackawanna Railroad. Later, he spent hours creating layouts for Arrow shirt collars at the Calkins and Holden advertising agency. On his own time, he advanced his artistic interests, attending classes at the Art Students League, studying with Robert Henri for a time. Acquiring a hand press of his own, he began to realize his determination to “do wood engraving exclusively, of my own designs, and not to use wood engraving merely as a method of reproduction.”1

Ruzicka’s first major, non-commercial commission was New York: A Series of Wood Engravings in Color, a limited-edition volume issued by the Grolier Club in 1915. From his arrival in Manhattan, Ruzicka had taken the built environment as his subject and while the scope of his work in various techniques ranged widely over his long career, images of streets and buildings are central to his oeuvre. Newark, Cleveland, Vassar College, and the United States Military Academy, West Point, are among the places he rendered in his spare, understated style. Remarking on the artist’s efforts in 1917, William M. Ivins, curator of prints at the Metropolitan Museum of Art, observed, “he is content to make his designs directly and calmly, without resort to forcing or over-emphasis, confiding fully in the telling power of terse veracity.”2

Ruzicka’s Boston adventure began in 1907, when he met Daniel Berkeley Updike, founder of the Merrymount Press. Although their initial encounter at New York’s Hotel Lafayette was uneasy (“I was quite interested in encouraging modern or contemporary art. . . . Updike’s tendency . . . was just to borrow things from the past,” Ruzicka later recalled),3 within a few years, the two had formed a professional relationship that would last for three decades.

In addition to working on books and other publications printed by Merrymount, Ruzicka created the annual New Year’s greeting that Updike sent to friends of the press. The first, for 1912, depicts the Old State House of 1713, the new skyscrapers of the day looming in darkness behind it (Fig. 1). The keepsakes, issued until Updike’s death in 1941, form a catalogue of Boston’s signifying structures and neighborhoods, including Faneuil Hall (Fig. 2), the Bunker Hill Monument (Fig. 3), and Louisburg Square, as well as notable places nearby—Harvard’s Lowell House (Fig. 4), Walden Pond (Fig. 6), and the House of the Seven Gables, among others.

By the time Ruzicka relocated to Massachusetts in 1948, the city’s glory days as an intellectual capital were past. In 1906 H. G. Wells said of a visit there: “The capacity of Boston, it would seem, was just sufficient but no more than sufficient, to comprehend the whole achievement of the human intellect up, let us say, to the year 1875 a.d. Then an equilibrium was established. At or about that year Boston filled up.”4 In her excoriation of the city, published in Harper’s Magazine in 1959, Elizabeth Hardwick asserted, “In Boston there is an utter absence of that wild, electric beauty of New York, of the marvelous, excited rush of people in taxicabs at twilight.”5

One can argue that, even as Ruzicka created his Boston images, he (or perhaps more accurately, Updike) was indulging a backward look. And to appreciate Ruzicka’s Boston work today is to submit to nostalgia. But there is more than sweet memory at work in these images. In his rendering of the Weeks Memorial Bridge (Fig. 5)—the arch of its span framing Harvard’s Gore Hall on the opposite shore of the Charles, a single sculler passing beneath—the low angle effectively captures the upward thrust of the structure, while the pile of clouds above extends the spatial dynamism of the engraving. Publisher David Godine, who gathered the keepsakes into a book in 1975 (Boston: Distinguished Buildings and Sites within the City and Its Orbit as Engraved on Wood by Rudolph Ruzicka), told me, “Ruzicka could look at very simple things, like the Frog Pond on Boston Common or the Newark waterfront—things most people would not look at—and somehow find the inner light that shone in those very simple, architectural arrangements.”

The expressiveness of Ruzicka’s minimal color palette is manifest in a view of the gold-domed State House as seen from the Beacon Hill garden of Ellery Sedgwick, editor of the Atlantic Monthly. Shades of red and yellow predominate, with an almost black brown marking the tall, leafless trees that form a counterpoint to the chimneytopped houses that lead the eye to the distant dome (Fig. 7). Although one might read these impressions as essentially architectural renderings, Ruzicka always imbued them with a sense of the living city. In his engraving of the Bulfinchdesigned St. Stephen’s Church in the North End, young folks gather around the fountain in the adjacent plaza (Fig. 8). The tree-shaded benches in Worcester Square are chock-a-block with people. A single pigeon swooping to the ground in the Public Garden is enough to conjure a sense of urban life.

“Through every piece of Ruzicka’s engraving and design,” said Updike, “runs a secure and sufficient quality—the sane, self-respecting individuality of a man who has something to say and says it simply, directly, calmly and felicitously.”6