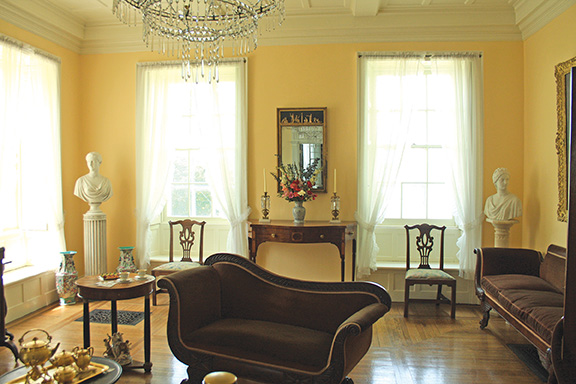 They sit along the east bank of the Hudson River in Dutchess and Columbia counties like so many pearls on a necklace: some three dozen estates built by the Livingston family and their relations. They range in size, style, and splendor, but the estate richest in history is Clermont. Named for its clear vista of the Catskill Mountains, it was the seat of seven generations of a family whose members played a leading role in the revolutionary era and the early years of the republic.

The first Livingston arrived in this hemisphere from Scotland around 1675, eleven years after New Amsterdam became New York. Known as Robert Livingston the Elder, he married into Dutch society, and acquired a 160,000-acre land grant from the colonial governor, and styled himself “Lord of Livingston Manor.” His son, Robert of Clermont—as he is called (early generations of Livingstons had the vexing habit of naming their sons Robert)—built his eponymous mansion about 1740. It was Robert of Clermont’s grandson, Robert R. Livingston, who became the most famous member of the family. Known as “the Chancellor”—the title at the time for the highest-ranking judge in New York—he was a delegate to the Continental Congress and sat on the Committee of Five that drafted the Declaration of Independence. His involvement in the rebellion so incensed the British that in 1777 they burned down the original Clermont. It was rebuilt the following year by the Chancellor’s mother, Margaret Beekman Livingston. The Chancellor administered the first oath of office to George Washington in 1789, and in the early years of the nineteenth century, he worked with Robert Fulton to develop the first commercially viable steamboat, the Clermont, which stopped at the mansion in 1807 as it chugged up the river on its maiden voyage.

Clermont mansion has undergone several changes and additions through the decades, as the socially prominent Livingstons kept current with architectural tastes. Today’s elegant edifice has Georgian bones, topped by a steeply pitched roof favored in the Victorian era. The house is appointed much as it was at the beginning of the twentieth century, with empire-style sofas and settees, elegant buffets with ormolu mounts, a model of the Clermont, and oil paintings of Livingstons. The house and the surrounding gardens, woodlands, and meadows are now a New York state park, open to the public and hosting events that range from July 4th fireworks viewing to sheep-shearing demonstrations.