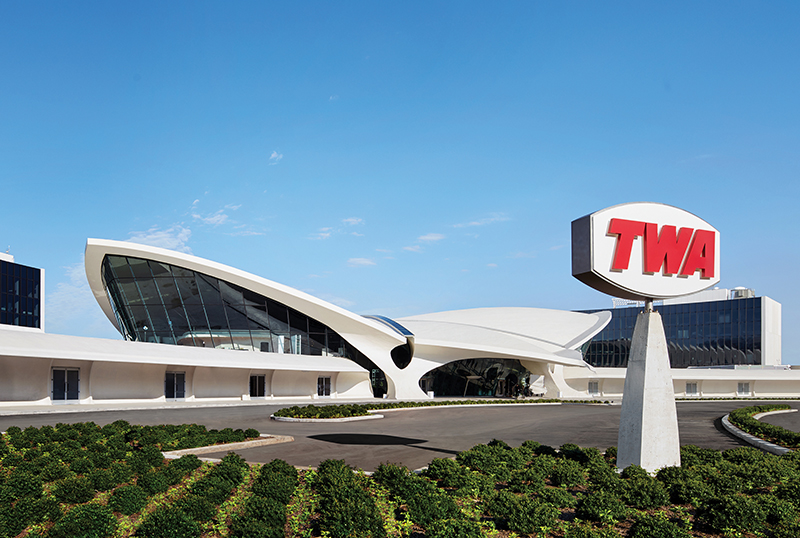 The iconic TWA Flight Center is back in business after a renovation that makes it the centerpiece of a new hotel and hospitality complex. At the height of its success, Trans World Airlines (TWA) was, along with American, Eastern, and United, one of the Big Four domestic airlines in the United States. Following World War II, airlines began to offer flights to Europe, Asia, and the Middle East, many of which flew out of New York City’s Idlewild airport, now John F. Kennedy International Airport. In 1954 it was decided that every major airline would construct its own terminal at Idlewild, and famed architect Eero Saarinen was tapped to construct TWA’s transatlantic hub. Saarinen and his team designed a space that was functional and beautiful, and presented TWA at the cutting edge of modernity. The bird-shaped building features soaring interior spaces, and expansive windows that allow visitors to watch arrivals and departures.

The terminal was finally completed in 1962, just months after Saarinen’s sudden death. In 1994, the exterior and much of the interior of the building were declared a New York City landmark, and in 2005 the structure was placed on the National Register of Historic Places. Those designations would later save the building from destruction after TWA went out of business, ending service from the terminal in 2001. More than a decade later, New York governor Andrew Cuomo announced hotel renovation plans. Construction began in 2016 and was finally completed this May.

The hotel’s more than five-hundred soundproof guest rooms are located in new structures that flank the Saarinen terminal. One features a rooftop pool and observation deck. A 1956 TWA Lockheed Constellation parked on the adjacent tarmac has been turned into a cocktail lounge. The New-York Historical Society has opened a small exhibition of TWA memorabilia including air hostess and pilot uniforms from throughout the years, the suitcase used by a traveling hostess, and vintage TWA in-flight offerings such as tin airplanes, custom tableware, and playing cards. Fashion designer Stan Herman, who created TWA hostess uniforms in the 1970s, came back at age ninety to design outfits for hotel employees. Dining options include the flight center staple, the Paris Café, renovated to mimic designer Raymond Loewy’s original specifications. Mad Men enthusiasts, book your stay now.