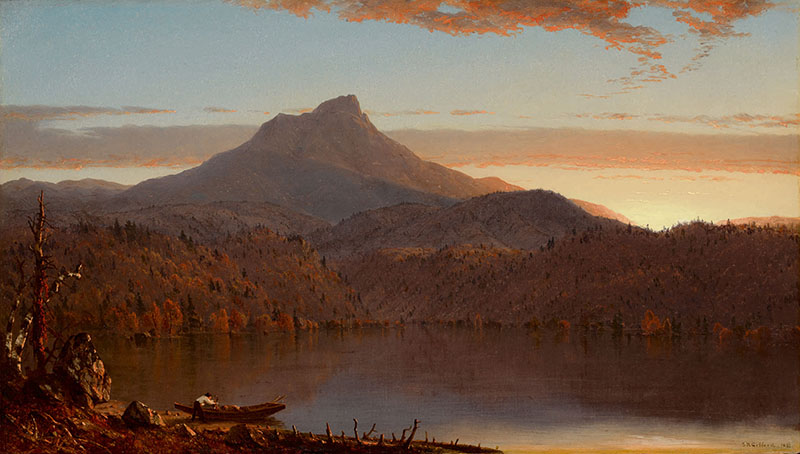 Recent articles discussing the American art auctions in May at Sotheby’s and Christie’s in New York expressed concern about the state of the market for Hudson River school paintings. As both a leading buyer and seller of these paintings, I believe that the sales results have been misinterpreted.

The idea that anyone could definitively determine the condition of any market by the performance of two specific sales is flawed. There were about forty significant Hudson River school painters who produced anywhere from one thousand to two thousand paintings each in their lifetimes. Therefore, it is reasonable to believe that at least sixty thousand works comprise the genre. One particularly outspoken assessment of the entire market was based upon the sale of just a few paintings. How credible can a conclusion be that is based solely upon the performance of less than one one-hundredth of one percent of a marketplace? Any projections based on such an infinitesimal sampling over a negligible time period would be as absurd as attempting to predict the yearly performance of the thirty Dow stocks based on one hour of trading on a random day!

We should also understand that auction sales are only a part of the market. Paintings sell virtually every day of the year and private sales account for the vast majority of all Hudson River school transactions. Galleries often sell more of these paintings in a month than both major auction houses are able to sell in a year. Private sales are not reported and, without these results, an accurate assessment of the market is not possible.

At best, a review of the recent spring auctions will help us to understand the mood of the market at a brief moment over the course of two days in the month of May. Yet if we do consider these auctions, bearing in mind the many factors that influence the value of art, there is actually significant reason for optimism.

Altogether, twenty-five Hudson River school paintings were offered by Sotheby’s and Christie’s, and eighteen, or seventy-two percent, sold. One of the unsold lots had three post-sale offers and reportedly sold within its estimate, and two others also sold immediately after the sale. Of the four remaining unsold works, one had significant condition issues, two depicted foreign scenery that is less appealing to collectors, and the last unsold lot featured atypical subject matter for the artist. If we include the post-auction sales, eighty-four percent sold.

Several paintings sold well above expectations, proving that quality examples attract aggressive bidding. An exceptional Sanford Robinson Gifford established an auction record for the artist, selling for $2.9 million. My gallery acquired another brilliant Gifford for $187,500, more than twice its high estimate. A small American scene by Thomas Cole sold for $162,500, exceeding its high estimate by more than thirty-five percent. In addition to these excellent results, two Albert Bierstadts, a William Trost Richards, and an Alfred Thompson Bricher all sold above their high estimates.

The combined total of twenty-five paintings by Hudson River school painters was unusually high for the major spring or fall auctions. Whenever there is an increase in supply for a particular category of art, it offers a good test of the actual demand for it. A thoughtful review of the results demonstrates that enthusiastic buyers bid competitively for solid examples. All but four of the offerings sold and there is reason to believe that they may sell eventually because both houses confirmed that there is post-sale interest. The May auctions clearly affirmed that buyers continue to seek quality examples from the period.

Last, there is the context of an auction. When art critics judge the performance of these paintings at a live sale, they are actually observing the market in the least optimal circumstances. Those interested in Hudson River school paintings prefer to carefully assess all the variables that impact quality and value. Auction houses put paintings for sale on view for just a few days, then they are sold in a matter of seconds, requiring buyers to make spontaneous judgements. The atmosphere is rushed and competitive and unfavorable for the many who make measured decisions.

Auctions make headlines and we hear about the extremes but actually learn very little about the integrity of the market. Without all of the private market data, any projection is at best a marginally educated guess. My gallery has been selling important nineteenth-century American paintings for some thirty years. If three decades of our transactions were public, I expect that certain commentators would realize that they have had an incomplete understanding of the market. Based upon all of my interactions with new and existing clients, my enthusiasm for Hudson River school paintings has grown. As always, I prove my conviction by my consistent willingness to commit my capital, and I expect to continue to do so without hesitation.