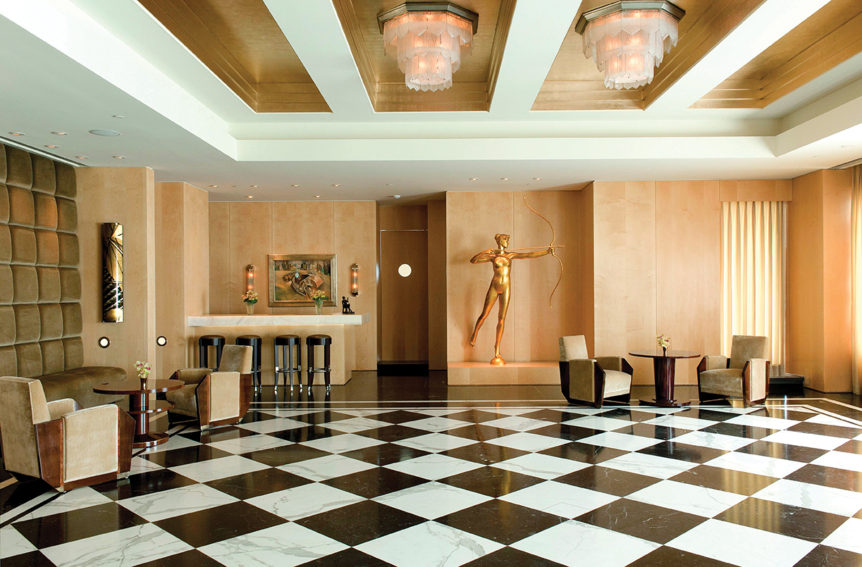 The man who brought together the furniture and works of art in two Texas homes takes inspiration from several directions.

In an age of art as speculation, pleasure and beauty can seem very much beside the point. Rare is the art buyer who pursues works to please the eye. Rarer still is one who does so while gathering things that will speak to one another across centuries and genres. The art, photography, and furniture that have been brought together in the San Antonio house and Houston apartment shown here tell the subtle story of one man’s investigation into much that his country has to say and show for itself. What is unique in these rooms is the way in which the works acquire additional meaning in the context of the whole collection.

Fig. 3. In the San Antonio entry hall, an early nineteenth­century American burl bowl sits atop a nineteenth­century walnut refectory table, also American. Artwork by Christo (1935–) and Jeanne­Claude (1935–2009), at left, and Jasper Johns (1930–) hang on the walls.

If Jasper Johns’ flag paintings from the late twentieth century at River Place in San Antonio raise their mute questions about our country, as Johns’s flag paintings invariably do, a fine eighteenth-century dressing table in Houston once owned by the great American patriot James Otis answers with a reminder of its democratic promise. It is an approachable collection. Nothing here shouts and nothing excludes. The celebration of things themselves in a Donald Judd work radiates space and calm, as does the maritime painting Camden Mountains from the Graves (1862) by Fitz Henry Lane.

Space and calm can reign here because the man who lives in these places knows there is a storm out there. Up in the library in San Antonio several editions of Moby Dick attest to that. Maritime paintings appear in both residences. Perhaps like the fellow who asks us to call him Ishmael, the owner, a passionate sailor, quietly takes to the ship as his “substitute for pistol and ball,” or again like Ishmael, simply for “the wholesome exercise and pure air of the forecastle deck.” One of his earliest purchases was a print of Winslow Homer’s Breezing Up, obtained for a dollar on Pine Street in Philadelphia more than half a century ago. Decades later he acquired Homer’s watercolor Boating Boys in Gloucester (1880), which joins works by James Buttersworth, Sanford Robinson Gifford, and others in tribute to water, the “ungraspable phantom of life” that Melville tells us is the key to everything.

Figs. 6a, 6b. A brass plaque attached to a walnut dressing table, made in coastal Massachusetts, likely Boston, between 1750 and 1775, attests to a history of ownership by colonial­era firebrand James Otis (1725–1783).

More recent works by artists such as Donald Judd, Ellsworth Kelly, and Hans Hoffman sit comfortably with nineteenth-century and early twentieth-century art because their experiments and investigations are so clearly part of the same pursuit of that ungraspable phantom. What grounds it all is the presence of the fine eighteenth- and early nineteenth-century American furniture—the New England side chairs, block-front desks, tea tables, high chests of drawers, and dressing tables that were this country’s first great art, reminders that our past is not, or should not be, a foreign country.

Fig. 7. The dining room in San Antonio features a group of walnut side chairs made in Massachusetts c. 1740–1760, and purchased from Israel Sack Inc., and a George III cupboard of inlaid oak, made in Wales in the third quarter of the eighteenth century. On it stands a pair of early Philadelphia silver teapots, c. 1790, marked by Abraham Dubois. Art in the room includes pieces by Johns, Josef Albers (1888–1976), and Buttersworth’s Mayflower Leading Puritan.

There is a lot of joy in these rooms, the Madeline panels by Ludwig Bemelmans, for instance, that delight guests in Houston along with a surprisingly jaunty work by Charles Demuth, In Vaudeville: Two Dancers (1920). There are also several grace notes of things not American, paintings by Georges Seurat and Paul Signac and an imposing mural by Jean Dupas, The Birth of Aphrodite (1934), from the grand salon of the S.S. Normandie, that French maritime immigrant to these shores whose glorious art deco interiors outlasted the ill-fated ship and have enriched buildings from Miami to Brooklyn.

Fig. 8. Two sack­back Windsor chairs are grouped near the fireplace in one San Antonio parlor. Flags I, a 1973 silkscreen by Johns, hangs above the mantel, and an 1889 self­portrait by Edward H. Barnard (1855–1909) hangs to the left.

Fig. 9. Artwork in a Houston sitting room includes Puritan and Genesta, an 1887 oil on canvas by Antonio Jacobsen (1850–1921), hung to the left of the doorway, as well as, to the right, Buttersworth’s c. 1886 oil on canvas Mayflower Leading Galatea.

When Henry James created the character of Adam Verver in The Golden Bowl he established a model for the art-loving American who uses his fortune to plunder Europe for treasures that will release his countrymen from “the bondage of ugliness.” These rooms show a much different and far healthier sense of American possibility—the beauty of an Augustus Saint-Gaudens Diana, for instance, is very much at ease with important works of French art deco by Émile-Jacques Ruhlmann and others. Paintings by George Wesley Bellows, Thomas Hart Benton, and Oscar Bluemner accompany the occasional Vlaminck or Georges Braque without requiring explanation. In San Antonio the region’s Spanish heritage survives in some of the furniture and the art, especially a portrait of Philip the Fair (1478– 1506) by the Master of the Legend of Mary Magdalene and, of course, in the house itself, built in 1880 by the young British immigrant, Alfred Giles, who saw the beauty of the region, understood its heritage, and built accordingly.

Fig. 10. In another San Antonio room, La Seine à Chatou, a 1908 oil on canvas by Maurice de Vlaminck (1876–1958), hangs above a fireplace flanked by a pair of baroque­style wrought­ iron candelabra.

Perhaps another famous first sentence in American literature can point us as fruitfully as Melville does to the spirit in these rooms: “I am an American, Chicago born…and go at things as I have taught myself, free-style.” So begins Saul Bellow’s Adventures of Augie March, a world away from the Houston and San Antonio places shown here and yet united with them in the spirit of idiosyncratic enterprise. This is not a collection in any traditional sense, nor is its creator a collector in the traditional sense. An observer of no orthodoxy, he has gone about things as he has taught himself, acquiring in the process an understanding of early American furniture as a founding element of American culture, and of American art of the distant past and recent present as close companions—with some few foreign cousins as part of the conversation.

Fig. 15. In the Houston guest room are several of the Madeline paintings by Ludwig Bemelmans (1898– 1962) that were created for the nursery of Aristotle Onassis’s yacht, Christina.

Fig. 16. The Houston apartment features a mahogany block­front chest of drawers made in Boston c. 1745. Above it hangs June 56 (Morbihan), a composition in oil and pencil on carved board laid down on Masonite by Ben Nicholson (1894–1982).

Fig. 18. At the other end of the ballroom stands a giltbronze cast of Diana, an 1892–1894 sculpture by Augustus Saint­-Gaudens (1848–1907). A version of the work, known popularly as “Diana of the Tower,” once stood atop the second Madison Square Garden, designed by architect Stanford White.

Fig. 17. Commanding one end of the ballroom in Houston is The Birth of Aphrodite, a c. 1934 verre églomisé mural comprising ten panels by Jean Dupas (1882–1964) that once graced the grand salon of the S.S. Normandie. Émile-­Jacques Ruhlmann (1879–1933) designed the macassar ebony, amboyna, ivory, and bronze case of the c. 1931 piano.

Fig. 14. The collection includes a carved, figured walnut compass­seat side chair made in Philadelphia, c. 1730–1740.