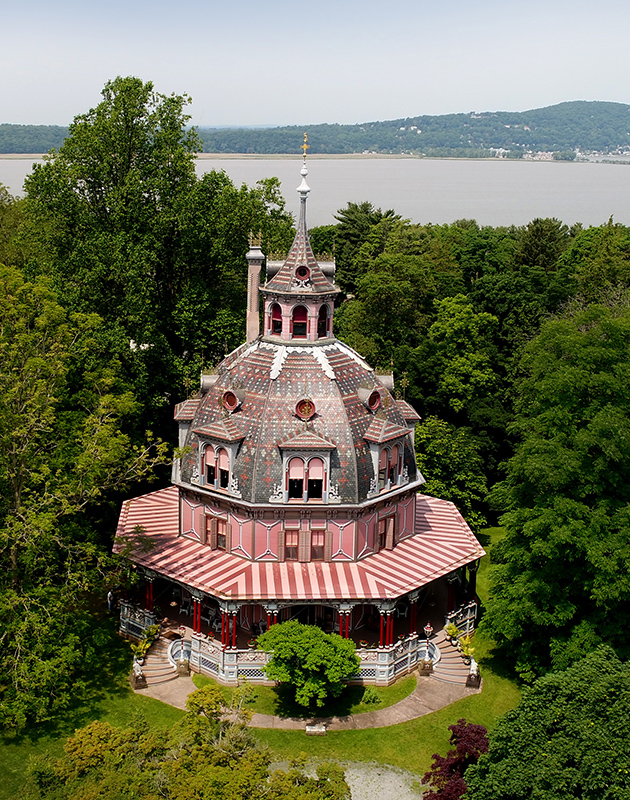 Second Empire France—ruled by Napoleon III from 1852 to 1870—bequeathed a varied and colorful legacy, especially in matters of architecture. Second Empire style enjoyed a great vogue in post–Civil War America, where architects capitalized on its French Renaissance outlines when designing such landmarks as Alfred B. Mullett’s Old Executive Office Building (1871–1888) and James Renwick’s Renwick Gallery (1874) in Washington, DC, and, perhaps the most exuberant of all, Philadelphia City Hall (1871–1901), by John McArthur Jr. and Thomas Ustick Walter, with its rocket-like central tower capped with sculptor Alexander Milne Calder’s thirty-seven-foot bronze statue of William Penn.

The most distinguishing characteristic of most American Second Empire buildings is the mansard roof, adding one or more attic stories to the basic structure. Punctuated with prominent dormers, the sides of mansard roofs can be flat or given a graceful curving profile—convex, concave, or ogee-shape. Ranks of columns, often paired, are another American Second Empire hallmark. Residential examples of the style include such landmarks as Chateau-sur-Mer in Newport, Rhode Island, originally completed to Italianate designs by Seth Bradford in 1852 and completely redesigned in the Second Empire style by Richard Morris Hunt during the 1870s. It was echoed in numberless late Victorian mansions, houses, and country villas whose designs modishly feature mansard roofs, verandas, and often a breeze-catching tower of the kind that the classic New Yorker cartoonist Charles Addams drew as the creepy domain of his night-crawling brood.

Nevertheless, for sheer conceptual ebullience, few Second Empire style houses in America can compare with the Armour-Stiner House overlooking the Hudson River from its vantage point in Irvington, New York. Many have known it simply as the “Octagon House,” due to its distinctive shape. Dating originally to 1860, the house underwent an important and elaborate redesign during the 1870s and a long decline during the mid-twentieth century. In 1976, its structure in a parlous state, and with the threat of modern development hanging over the entire three-plus-acre property, it was acquired by the National Trust for Historic Preservation. Three years later it became the first National Trust house to be resold to a private citizen. The purchaser, under a National Trust preservation easement was a young architect, Joseph Pell Lombardi. Over the next four decades, Lombardi committed himself to restoring the Armour-Stiner House completely, a process he now compares to “locating and conserving the elements of a 500,000-piece jigsaw puzzle.”

Earlier this year, faithfully returned to its 1872 condition and appearance and authentically furnished, decorated, and landscaped, the Armour-Stiner House opened for public tours. Lombardi has achieved a living embodiment of prosperous flamboyant domestic life along the Hudson River during the era of President Grant. And therein lies an extraordinary saga of architectural, decorative, and social history, as well as a bracing lesson in connoisseurship, sensitive historic preservation, and the saint-like patience that they can demand.

Octagonal houses have a long tradition in America—possibly the earliest surviving example being the eight-sided brick plantation house Poplar Forest, in Virginia, designed and built by Thomas Jefferson between 1806 and 1823. The so-called Octagon House in Washington, DC, is actually a hexagonal building intended to fit an irregular site; designed by Dr. William Thornton, architect of the first United States Capitol, and built between 1798 and 1800, it was occupied by President James Madison after the British burned the Executive Mansion during the War of 1812.

The mid-nineteenth century witnessed a fad for octagon houses initially inspired in America and Canada by the publication of the book A Home for All, or A New, Cheap, Convenient and Superior Mode of Building in 1848. The author was one Orson Squire Fowler, a practitioner of phrenology, the pseudoscience that held that the conformation of the skull and its surface was indicative of mental faculties and character. He was, among other things, an amateur architect, and his book encouraged the building of octagonal houses on the premise that the shape encloses one-fifth more space than a square house, creates rooms more accessible to one another, and is more natural—and more beautiful—because it approaches a circular shape. Moreover, Fowler asserted that with eight fenestrated sides, octagon houses receive twice the sunlight as four-sided houses, and that the octagon plan provided square rooms with convenient triangular closets between them. The book caught on, and during the 1850s and ensuing decades numerous octagon houses were built in the US and Canada. Many were designed in the prevailing Italianate style. Usually two stories and a basement, with a flat or shallow roof, topped by a cupola, and with a veranda extending all around or at least on four contiguous sides. To prove his point, Fowler built his own four-story, sixty-room octagon house near Fishkill, New York. Illustrated in the 1853 edition of his book, it sported verandas encircling the upper three stories and was topped by a glass-domed octagonal cupola.

No view has yet been found of the first incarnation of the Armour-Stiner House, but the original flat roof remains in place beneath the third floor of the current building, proving that when it was first built by Manhattan banker Paul J. Armour between 1858 and 1860 it consisted of two stories and a basement; and it was probably encircled by a veranda and topped with a cupola. Armour was fifty-six when he moved into the house in 1860. Unfortunately, he died only six years later. In 1872 his widow sold the property to the prominent New York tea and coffee merchant Joseph H. Stiner for $27,000, and thus began its first heyday. Hungarian-born, Stiner had immigrated to the United States in 1850, and opened a chain of tea and spice shops in New York. Despite experiencing a serious financial loss in 1871, he purchased the Armour house the following year, enlarging the property by acquiring several adjacent plots, which he landscaped and planted with exotic specimen trees. Most important, Stiner ordered a lavish enlargement and redesign of the house itself, transforming it into a distinctive, indeed unique, interpretation of eclectic Second Empire style.

Stiner’s most noticeable addition was the great dome and its cupola. Though no name of an architect or builder has come down to us, Stiner’s magnificent dome represents an ingenious application of a convex mansard roof to the house’s octagonal perimeter. Punctuated by eight large, heavily embellished dormers, and eight bull’s-eye dormers above them, it added two spacious stories to the Armour original. At its summit rises the octagonal cupola, or observatory, whose soaring conical spire and elaborate finial project the dome’s jubilant energy skyward.

The second major alteration was the enlargement and elaborate re-ornamentation of the veranda, which broadened the first story, lending visual weight to balance the great mass of the dome. Encircling the house, Stiner’s remodeled veranda imparts a Ruskinian Venetian Gothic flavor with its rhythmical arrangement of fifty-six columns, each slender shaft culminating in a medieval style capital carved with flowers peculiar to the surrounding grounds (Fig. 4). Each panel of the ornate cast-iron balustrade is emblazoned with a cast portrait of Stiner’s prized English terrier, Prince, in high relief (Fig. 3).

Apparently a noted collector and connoisseur, Stiner filled his house with art and fine furnishings, to make it a splendid country villa where he could entertain graciously. Yet only six years after purchasing the property, Stiner suffered another financial reversal in an unsuccessful real estate venture in 1878. Adding to this blow, his wife died in 1881. The next year, Stiner sold his pleasure dome and its land for $22,250—less than he had paid for the original house alone—and moved to Dobbs Ferry, where, remarried and admired by the community, he died in 1897.

After Stiner sold it, the house went through a long series of owners, who variously strove to maintain a property increasingly regarded as unfashionably passé, especially after the general repudiation of high Victorian style following World War I. Yet it continued to attract owners with an artistic sense of the offbeat. From 1945 to 1946 it was rented by the Russian-born writer, photographer, and adventurer Aleko Axel August Eugen Lilius (1890–1977), best known for his 1930 memoir, I Sailed with Chinese Pirates, recounting his experiences with the notorious woman pirate Lai Choi San aboard a plundering junk on the South China Sea. In 1946 the property was purchased for $8,500 by the celebrated author Carl Carmer (1893–1976), whose bestselling memoir, Stars Fell on Alabama (1934), had established his national reputation. Life magazine featured the house in 1947, describing it with typical mid-century contempt as a“magnificent monstrosity looming like a pastry chef’s nightmare.”

Nevertheless, Carmer and his photographer wife, Elizabeth Black, loved the place. By the 1970s, however, the aged house was more than the aging couple could handle. Over time it had lost window shutters, decorative cresting and ironwork, and had suffered multiple unsympathetic paint jobs inside and out—even the walls, ceilings, and varnished interior woodwork had all been painted white. Worse, it was structurally unsound. Determined to save the property from destruction, the Carmers offered it to the National Trust, which accepted it in 1976, the first property to be acquired as part of its newly established Limited Endangered Building Fund.

When Joseph Lombardi acquired the property, he already knew that the great mansard dome was near collapse, its eight sides spreading apart because Stiner’s original builder had not installed a tension ring around the dome’s base to prevent this. Lombardi devised a radical solution—completely untested—on which he was prepared to stake his professional reputation and his financial resources.

Working with engineer Eugene Avallone, Lombardi girdled the dome’s base and mid-point with two steel tension cables, both fitted with turnbuckles at each of the dome’s eight sides. As each turnbuckle was tightened, the cables would compress the dome from outside. Simultaneously, turnbuckled interior cables radiating from the center point of the dome to each corner pulled the dome together from within. Because the spreading dome had also sunk, Lombardi placed jacks on the third floor, bracing the floor with temporary posts inserted below. This tightening process took three agonizing years, with the constant fear that if a cable snapped, the dome would collapse. Finally, the dome was restored to its original position. A permanent steel band was fitted around the base and the interior cables concealed above the dome’s ceiling line.

With the basic structure completely stabilized, Lombardi devoted himself to the rest of his exceptional restoration project. The house’s every feature was exhaustively researched to facilitate replication of missing cast-iron and carved ornaments; quarries in Vermont and Connecticut were located to replace missing roof slates and brownstone plinths for sculpture; microscopic paint analysis was conducted over every inch of the house to determine the original color schemes of every room. The work went on: restoring the original wood-burning range in the “ladies finishing kitchen”(Fig. 8) and hunting down an authentic range for the service kitchen; restoring the house’s original gasoliers (now electrified) and the elaborate plaster ceiling roses from which they hang; stripping the over-painted woodwork and restoring its rich glow by French polishing it with seven hand-rubbed layers of shellac; re-creating authentic window hangings and carpets. Above all, the many rooms were furnished with glorious suites of Renaissance revival furniture by John Jelliff, George Hunzinger, Pottier and Stymus, and other makers, all complemented with fine paintings, sculptures (including several important statuary groups by John Rogers), silver, ceramics, and other features authentic to the house. Throughout, this project was guided by Lombardi and his son Michael, who, after an apprenticeship in carpentry, has over the past thirty years, managed, intermittently researched, and performed restoration work throughout the house and its grounds. Their combined labors reflect the purist sensibility of a museum curator enlivened by the affection born of ownership.

Thus restored to its polychromic glory, and handsomely ensconced among exotic specimen trees and shrubs, the Armour-Stiner House joyously proclaims its noble eccentricity both as a family home and a historic site to visit.

The information contained in this article, including quotations, is taken primarily from Joseph Pell Lombardi’s comprehensive essay  “The Armour-Stiner (Octagon) House, Irvington-on-Hudson, New York,” available online at armourstiner.com. Tours of the house are available by reservation only; tickets may be purchased on the website.