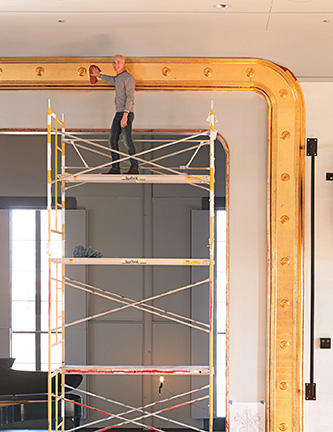 The art and antiques trade has helped attract many talented people working in the decorative arts to the area. Meet a few of them:

My father was a carpenter,” says the native of Buckinghamshire, England, which explains his affinity for wood and furniture. A graduate of Britain’s West Dean College—arguably the world’s leading institution for furniture conservation studies— Thomas, in his career, has worked for Christie’s and Sotheby’s, and for posh clients from Guinnesses to Gettys. Since 2001 he has run the workshops at Stair Restoration, the respected Claverack, New York, atelier that took a lead role in the mammoth renovation of the United Nations headquarters. Though he has worked on fine French furniture owned by Marie Antoinette, Thomas says his favorite projects involve creaky American and English pieces. “The more broken the better; makes a good, fun jigsaw puzzle,” he says. “Getting those patinated surfaces to look right is a lot of work—but extremely rewarding.”

Borman on the job at Hudson Hall.

The Chicago-born Borman has a precise way of speaking that is unusual for people who hail from that city, but which may account for his skill in an exacting line of work. His fifteen-year-old decorative painting firm, DesignRed, specializes in faux finishes that don’t ring false; and trompe l’oeil painting that truly trompes. Borman started out as a chemist—a field of study whose “logic appealed to me intellectually,” he says. The dayto-day work had less appeal, however, and in casting about for something more satisfying, he hit on painting. He has painted and drawn all his life, and one of his earliest memories, Borman says, is of “the fantastic smell of oil paint.” In the early 2000s, he started out painting apartments in Brooklyn, and gradually learned rigorous decorative techniques that ranged from water gilding to verre églomisé. Borman recently donated his time to help with the refurbishment of the grand theater of the 1855 landmark Hudson Hall, doing the gilding and stenciling work on the proscenium arch. “I am thrilled and honored,” he says, “to have been a part of such an important project.” Nothing’s faux about that sentiment.

Some examples of Greif’s work.

The course of a creative life never did run straight, as Greif can attest. She has been an art director for Barneys New York and Mademoiselle and Self magazines; she directed music videos in the early days of MTV; she designed album covers for Madonna and Debbie Harry. All the while she was a fixture at Manhattan rock clubs like CBGB. A few years ago, settled down into motherhood and middle age, Greif took a pottery class in her Brooklyn neighborhood on a whim, then set herself a project to make a full set of dishes and kitchenware, down to the serving utensils. “People liked the pieces,” she says. “Friends started asking me to make things.” A business was born. Since 2012, Greif has split her time between Brooklyn and Hudson, making the most of the smallest building—a mere ten feet wide—on Warren Street: a studio and kiln in the back, a retail shop in front, and living space upstairs. She works until she has sufficient inventory, then hangs out her shingle. There’s a Zen-like, yet endearingly human quality to Greif’s deceptively simple hand-painted patterns and less-than-perfectly shaped ceramics. She does not create “signature” motifs because, Greif says, “I like designing the most. I’m not a good potter. It’s hard work. Clay is heavy, and I’m a small person.”